Jacobs looks back and ahead 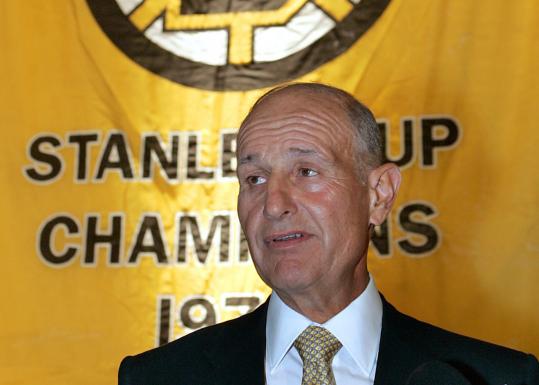 Bruins owner Jeremy Jacobs said that while he was proud of his team, expectations for the playoffs were higher. (2005 File/David L. Ryan/Globe Staff)
By Fluto Shinzawa Globe Staff / May 28, 2009
Text size – +

Salary cap concerns may lead to a 2009-10 Bruins roster minus some of the significant contributors to the club that won the Eastern Conference regular-season crown and advanced to the second round of the playoffs.

But two factors will make management's offseason moves somewhat more palatable. Owner Jeremy Jacobs, who also serves as chairman of the NHL's Board of Governors, said yesterday he didn't expect next season's cap to change from the $56.7 million of 2008-09. Also, Jacobs said the franchise will be in a position to spend to whatever ceiling is earmarked for 2009-10.

"We have been," Jacobs said of the team's post-lockout history of spending to the upper limit. "I don't see anything changing in that at this point."

Jacobs, along with executive vice president Charlie Jacobs, participated in a 20-minute conference call to reflect on the 2008-09 season. They also shared some insight on other team and league matters.

"After 82 games with the best record in the East and the second best in the NHL, I think our [playoff] expectations were a lot higher," Jeremy Jacobs said. "In the room afterward with the players, they knew they were better than that. They could have played better. They knew they were more talented and probably have to work harder and be more committed than they were.

"But I was extremely proud of the team, management, and coaching staff. I don't see anything that was wanting in that group. They know they've got something to build on for next year. They feel we've got an organization that can move forward and play a role in the finals of the National Hockey League. I believe and hope this was a growing experience for them. The expectations during the Stanley Cup are much higher than the normal season. I think they're up for doing it."

Jacobs's prediction of a steady cap and the ability to spend to the ceiling will be helpful tools for general manager Peter Chiarelli, who is also going through contract negotiations. Chiarelli, recently named Executive of the Year by The Sporting News, will be entering the final season of his four-year contract. Charlie Jacobs said that while the team and Chiarelli have not had face-to-face discussions for several weeks, he anticipates re-signing the GM this summer. Jacobs said he had hoped to have completed negotiations by now.

Jeremy Jacobs added that his philosophy of bringing on Chiarelli after firing Mike O'Connell was to identify an executive who could fill the position long term.

"When we hired Peter, we didn't hire him for four years. We hired him for the rest of his pro career," said Jacobs. "That's been our style before. Peter's grown immensely the last few years. He's done an admirable job. We want to see him around long term. I think that's his objective as well."

The Bruins will host the Winter Classic at Fenway Park in January 2010, but Jeremy Jacobs said the league will not confirm until July. "Everything I've seen acts like and smells like it's going to be in Boston," said Jacobs. "I don't know anybody else that's gone through the process like we've gone through. Traditionally, the league announces it in July. It's probably going to be the biggest Classic." . . . Charlie Jacobs said the team has sold 13,000 season tickets for 2009-10. "I think there is opportunity for growth," he said. "People have reconnected with this franchise that hadn't in previous years. It's starting to reflect in the community. We're seeing that interest on our website, with our broadcast partner in NESN, and at the box office. I do think there's more room to grow. People feel good about where this team is today when they think of the Boston Bruins. That only bodes well for us." . . . Eight players on the playoff roster were 25 or younger, which should indicate further development in the years ahead. "I find solace that we have so many young kids," said Charlie Jacobs. "Players under the age of 25 that have so much promise and playing time and successful years ahead of them. This was a great year. I believe we have many more ahead of us, especially if we continue on this path."