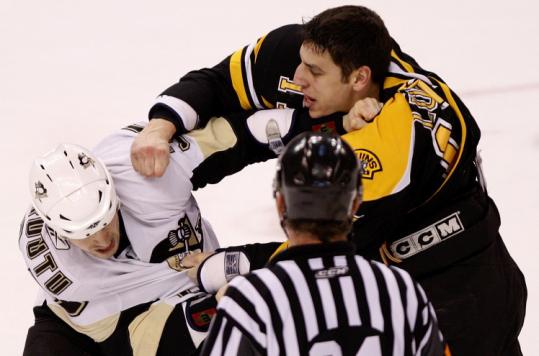 The Penguins' Jarkko Ruutu asked for it - and rookie Bruins basher Milan Lucic gave it to him near the end of the game. (Barry Chin/Globe Staff)
Email|Print| Text size – + By Kevin Paul Dupont Globe Staff / February 29, 2008

Jarkko Ruutu did some last-minute shopping at TD Banknorth Garden last night, and in the end, the agitating Penguins forward bought himself a fistful of trouble.

"We've got the toughest 19-year-old in the world right now," said Bruins center Marc Savard. "People talked over the summer about wanting to get back some of that Big Bad Bruins mentality. We definitely have that spice this year."

Rookie winger Milan Lucic was the purveyor with 2:28 left in the third period, after Ruutu got in his face along the boards in front of the Boston bench. The game all but over, the Bruins up, 4-1, Ruutu pressed the 6-foot-4-inch Lucic to fight, and at first Lucic was a reluctant combatant.

"You know, I rebroke my nose last week in Florida," explained Lucic, who became a rhinoplasty candidate with a nasty fall into the rear boards at Philadelphia a few weeks earlier. "The last thing you want to do is get into a fight with a broken nose . . . but there you go, it went pretty well."

It also went long. Once Lucic decided to accommodate Ruutu, first landing a series of righthand hooks to the kidneys, the two tangled for just under two minutes (NESN's Jack Edwards clocked it as 1:47). About all Ruutu could do was hold on. He survived a couple of strong belts to the head and just missed getting put to sleep by a couple of Lucic right crosses.

"Ruutu was looking for it," said Savard. "And Looch's line is pretty much, 'Hey, try me out if you want to go.' At the end, after a long fight like that, I'm surprised Looch could get his arms up."

Lucic, in fact, waved high both arms, stirring up the crowd in a manner reminiscent of the days when P.J. Stock, the Pint-Sized Pugilist, was the resident mini-mauler on duty. The gesture, said Lucic, was something borrowed from Shawn Thornton.

"Just a salute to the crowd," said Lucic. "I saw Shawn do it, and it really gets the crowd into it. So, hey, why not?"

Earlier in the evening, Penguin heavyweight Georges Laraque tried to engage Lucic too, but the rookie opted not to be turned into beef puree.

"He felt I was running around out there," said Lucic. "I said, 'No thanks, I've got a broken nose, so I've got to stay away from this one.' "