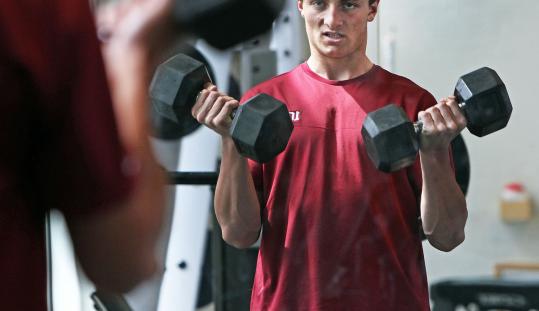 In the next few days, Chris Calnan will make a short-term decision. He hopes it will play a part in achieving his long-term goal of making the NHL.

The 18-year-old Norwell native, who is scheduled to become a senior at Noble and Greenough this fall, has three options. Calnan can remain in prep school and most likely serve as a captain for the club. He can stay at Nobles as a student but play for the Eastern Junior Hockey League’s South Shore Kings. Or Calnan can enroll at an Iowa high school and play for the Waterloo Blackhawks, who own his US Hockey League rights. He has committed to Boston College for 2013.

Naturally, Calnan’s current coach believes one path is preferable to the others.

“The thing that really bothers me and worries me,’’ said Noble and Greenough coach Brian Day, “is an awful lot of kids are being sold the idea that hockey is the only thing, without pursuing the best education possible.

“In 25 years, three kids I’ve coached got to the NHL. Two of them have college degrees. The good players who don’t make it, they still have the education piece to fall back on at the end of the day.

At this week’s NHL draft at Pittsburgh’s Consol Energy Center, Calnan will most likely be picked in the middle rounds. The NHL Central Scouting Bureau pegs the budding power forward as the No. 69-ranked North American skater. Calnan plays a rough-and-tumble style that has made his hometown Bruins take notice.

Kyle Woodlief, chief scout of the Red Line Report, wonders whether Calnan might have been slotted higher had he played hockey elsewhere in 2011-12.

“He’s probably done what he can do in prep school,’’ Woodlief said. “Prep school is a terrible developmental level for any kid at any position. You can play major junior in Canada, go to the USHL, the EJHL. He’s going to better himself in any of those leagues more than playing in 26 or 28 games in prep school.’’

It is a sentiment players in Calnan’s position have heard for quite some time. There are NHLers, such as Jonathan Quick (Avon Old Farms), Mark Fayne (Nobles), and Chris Kreider (Phillips Andover), whose prep school roots did little to stunt their development. But American youngsters, via scouts, coaches, junior officials, and family advisers, are being told that a league like the USHL is the best developmental avenue. They cite the coaching, level of competition, and heavy game schedule as advantages.

“It’s a better league,’’ Calnan said. “It’s going to get me better prepared for BC. The downs are that it’s in Iowa, far from home. You don’t really get to have a senior year. You’re in a different place and you don’t feel as comfortable. On the education piece, you’re not going to get a diploma from Nobles.’’

Calnan also acknowledged the positives and negatives of his other scenarios. He believes the EJHL will be a better league for him to polish his on-ice skills. But it might be awkward for him to see his Nobles coaches and teammates every day while playing for another club. If Calnan remains at Nobles, he could assume a leadership position and graduate with his friends.

“The downside,’’ Calnan said, “is that it might not help me fit into the BC lineup as much.’’

Day’s argument is that players who are good enough to reach the NHL will eventually get there regardless of the path. Day often refers to Fayne as a player who excelled in prep school. After graduating from Nobles, Fayne played four years at Providence College. As a first-year pro, Fayne appeared in 19 AHL games before graduating to New Jersey full-time.

“It didn’t hurt him to stay at Nobles and graduate from Nobles,’’ Day said. “It didn’t preclude him from being a real solid player and being in the Stanley Cup Final.’’

Calnan projects to be a skilled wing at BC and a grinding forward in the NHL. This past season, he had 28 goals and 27 assists in 27 games. Nobles lost to Lawrence Academy in the New England prep school final.

“He’s a guy with good size, drives the net hard, sees the ice pretty well,’’ Woodlief said. “He’s more of a creator off the wing than a goal scorer. He’s more of a playmaker than natural finisher. He uses his size really well along the boards and down in the corners. He’s really good below the circles.

“He’s a high-character kid in terms of work ethic and compete level. He’s a terrifically fit kid. I don’t know that his skill level is first- or second-line quality in the NHL. But because of his size, compete level, and work ethic, he could be a bottom-six forward.’’

The 6-foot-2-inch, 195-pound Calnan continues to transform from a pure goal scorer to a blue-collar grinder. Calnan, who is the nephew of former NHLer Jeremy Roenick, opened eyes at the NHL combine in Toronto earlier this month. He posted a best-in-show vertical jump of 32.5 inches, an indicator of explosive speed. Calnan was among the top performers in the Wingate bike test, which measures anaerobic fitness.

With more on-ice development, Calnan could mature into the type of power forward that every NHL club is seeking.

“It’s more about playing physical,’’ Calnan said. “That’s what pro scouts want to see. They want a guy who’s big and throws the body around.

“Not a lot of people like to go into the dirty areas. I like to do it. Teams need it.’’