Rookie Mallett taking it all in

He's says Brady has been mentor 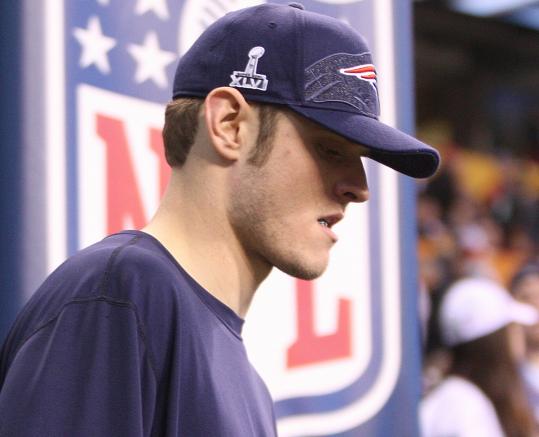 Patriots rookie Ryan Mallett is trying to soak up as much knowledge as he can as a backup quarterback. (Jim Davis/Globe Staff)
By Peter Abraham Globe Staff / February 6, 2012
Text size – +

INDIANAPOLIS - Ryan Mallett sat out the 2008 season after he transferred from Michigan to Arkansas, so the frustration of practicing all week without any hope of playing is familiar to him.

What’s different this year is how much he is learning.

When the talented Mallett fell into the third round of the draft because of character questions, the Patriots took him with the idea he could someday replace Tom Brady.

Mallett was inactive for all but one game this season. His job was to run the scout team with fellow backup Brian Hoyer and soak up as much knowledge as he could from Brady and the coaching staff. George Godsey, a coaching staff assistant, pulled Mallett aside for individual meetings and workouts throughout the season.

“It was like going to school every day,’’ said the 6-foot-5-inch Mallett, who threw for a school-record 62 touchdowns in two seasons with Arkansas and averaged just less than 300 passing yards per game in 2010. “I’m learning from one of the best guys ever to play the position in Tom.’’

Offensive coordinator Bill O’Brien praised Mallett for his work ethic, saying the rookie got the most out of what could have been a difficult situation.

“I would say Mallett has done an excellent job of trying to learn every day this year and he’ll go into camp next season on equal footing with a chance to see how he does,’’ O’Brien said.

“He’s a great kid and he has huge potential. He was coached really well by [Arkansas coach] Bobby Petrino before he got here.’’

Mallett will have to deal with some transition next season. O’Brien is leaving to become the coach at Penn State and has hired Godsey for his staff. Josh McDaniels is expected to be the new offensive coordinator.

And the 34-year-old Brady is not retiring any time soon.

“It’s a good situation for me to be in,’’ Mallett said. “There are times you wish you could be playing. But you can’t beat the experience of watching [Brady] and picking his brain. He has been really great to me.’’

Veteran running back Kevin Faulk watched Mallett and approved of how he handled his first season.

“Look who he’s behind. If you’re not getting better being behind Tom Brady, something is wrong. He’s learning a new offense and new style of play and he’s getting there,’’ Faulk said. “You can just be sitting back or you could be learning. I didn’t see him sit back. He’s got a lot of talent.’’

Mallett plans to see the Red Sox in spring training sometime soon. He is a close friend of third base prospect Will Middlebrooks.

Their fathers were football coaches and when Mallett moved to Hooks, Texas, in seventh grade, Middlebrooks soon became like a brother to him.

“I met him at a football camp and he was the only one there who could throw the ball like me,’’ Mallett said. “He could really spin it. We started talking and ever since then, we hit it off. He’s my boy.’’

According to Mallett, Middlebrooks had a bright future in football.

“He was a beast. He won a state championship; he was the All-State punter. He could throw and I always thought he could be a great receiver,’’ Mallett said. “One of his teammates was [University of Oregon star] LaMichael James. He was big-time.’’

Middlebrooks turned down a scholarship to play football and baseball at Texas A&M after the Red Sox drafted him in 2007 and signed him to a $925,000 bonus.

“I would have kept playing baseball if I knew I could get that kind of money,’’ Mallett said. “But Will deserved it. He’s a great baseball player.’’

In a few years, Mallett could be the starting quarterback of the Patriots and Middlebrooks the starting third baseman of the Red Sox.

“The weirdest thing is we always used to talk about that,’’ Mallett said. “We used to say, ‘We’ll be on the same team or maybe we’ll live in the same city.’ Now maybe it will happen. How weird is that? It would literally be a dream come true.’’