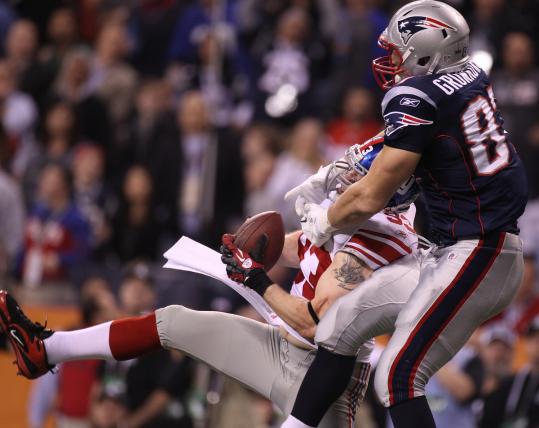 INDIANAPOLIS - The Patriots have elected to defer when they win the coin toss, dating to a couple of seasons ago.

The Patriots have had great success by deferring and pulling off back-to-back possessions. Although they sacrifice having the ball from the opening snap, the Patriots usually get the ball to close out the first half and then have it again to start the second.

The now-patented move almost worked to perfection last night, and caused a change in momentum that they nearly rode through the end of the game.

Trailing, 9-3, as they began their final possession of the second quarter, the Patriots were backed up at their 4-yard line, then the 2 after a Logan Mankins false-start penalty on the first snap.

From there, quarterback Tom Brady went to work, completing 10 of 10 passes, the final one to Danny Woodhead for the Patriots’ first touchdown and a 10-9 lead heading into halftime.

The 96-yard scoring drive (starting from the original line of scrimmage) tied for the longest drive in Super Bowl history. There were three other times when a team had gone 96 yards for a touchdown.

Coming out of the locker room, New England moved the ball with ease; Brady found Chad Ochocinco for a 21-yard gain, then BenJarvus Green-Ellis picked up 25 total yards on back-to-back plays. Five snaps later, on second-and-short, Brady hit Aaron Hernandez, who ran into the end zone from 12 yards.

Guard Brian Waters, the best offseason acquisition the Patriots made, played in the first Super Bowl of his 12-year career.

Though he signed a two-year contract, Waters said after the loss he hasn’t decided on whether he’d be returning.

“I’ll take two to three weeks to figure it out, talk it over with my family,’’ he said. “I feel good [physically].

“It would have been [great] to win a championship, but you won’t get any complaints from me.’’

Right tackle Sebastian Vollmer returned after missing seven games because of foot/ankle and back injuries.

Though he missed a lot time, Vollmer said he felt pretty good.

“It was great to get a chance to play in the Super Bowl,’’ the third-year player said. “I’m thankful I had the opportunity. I’m disappointed though; I wish we could have won.’’

Coach Bill Belichick said earlier in the week that the team did not put Vollmer on injured reserve because the German-born lineman is so talented and could help if healthy.

Linebacker Rob Ninkovich spoke to reporters freshly shaven: the veteran had been growing his beard for more than 10 weeks - since the last time the Patriots lost a game.

But in the locker room last night, he took off the beard.

Ninkovich had four tackles and a half-sack against the Giants.

It came as no surprise tight end Rob Gronkowski and The Football World’s Most Talked About Ankle were active last night for Super Bowl XLVI - though the second-year player had not fully practiced since the days before suffering a high left ankle sprain in the AFC Championship game two weeks ago.

During warm-ups, Gronkowski seemed to be laboring as he ran. His ankle was heavily taped. He had two receptions for 26 yards.

But in a bit of a surprise, at least for sentimental reasons, Kevin Faulk was inactive.

Faulk, the last player on the Patriots’ roster to pre-date Belichick’s arrival as head coach, almost certainly has played his last game.

At 35, he started the season on the physically-unable-to-perform list after tearing his left anterior cruciate ligament early in the 2010 season; though he was activated during the bye week and played a higher-than-expected number of snaps in Pittsburgh, his role has steadily declined.

He was active for the AFC title game but did not play a snap, even on special teams.

Patriots receiver Tiquan Underwood became a sympathetic figure Saturday night when he was cut approximately 24 hours before kickoff to make room for defensive lineman Alex Silvestro, who was promoted off the practice squad but did not play.

Underwood, the third-year receiver who had been active for the final six games of the season and two playoff games, had three receptions for 30 yards. However, he did not contribute on special teams. Silvestro could have taken Gronkowski’s spot on special teams.

A league source confirmed yesterday that the release of Underwood was not done for disciplinary or team chemistry reasons.

Underwood publicly handled the release well, tweeting on Saturday night, “This Is Nothing But MOTIVATION…/I Been Thru A LOT…But There Are Ppl In This World w/ More Serious Problems.’’

Early yesterday, he sent another missive, saying he was rooting for the Patriots and one of his best friends, Devin McCourty.

Stevan Ridley, who was inactive against the Ravens after he fumbled in consecutive games, was available to play but did not get in. The Patriots only rushed 19 times, with two of those going to receiver Wes Welker on end-arounds. Backup quarterback Brian Hoyer and defensive back Nate Jones were the other two Patriots who were active but failed to see action. The inactives were Faulk, defensive lineman Ron Brace, offensive linemen Nick McDonald and Donald Thomas, linebacker Gary Guyton, quarterback Ryan Mallett, and running back Shane Vereen . . . Patriots kicker Stephen Gostkowski was a two-sport athlete at Memphis, playing baseball in addition to football. That was him making a tackle on a Giants kick return in the third quarter. He had six special teams tackles this season.

Many Patriots fans considered it bad luck when Belichick wore a red pullover for Super Bowl XLII. Perhaps Belichick is superstitious, because he was back in his customary gray hoodie with the sleeves cut off . . . Robert Kraft took a family photo on the sideline before the game with his four sons and grandchildren . . . Faulk led the huddle after the Patriots took the field in the minutes before kickoff, getting his teammates hyped up . . . The Patriots won the coin toss. It was the first time in 15 years that the NFC lost the opening toss. The Giants called tails.

Michael Whitmer of the Globe staff contributed to this report. Shalise Manza Young can be reached at syoung@globe.com. Follow her on Twitter @shalisemyoung.