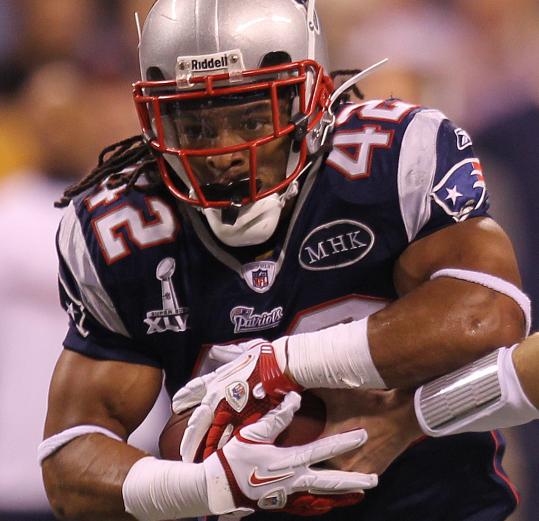 INDIANAPOLIS - Years ago, BenJarvus Green-Ellis found himself in the same position as thousands of youngsters with a passion for football: His mother, fearing serious injury, didn’t want her son playing the sport.

That kind of parental protection hasn’t waned. In fact, because of the number of head injuries that athletes young and old have suffered playing fast, physical contact sports such as football and hockey - especially in recent years - concerns have never been greater.

Numerous studies are being done to gauge the seriousness of concussions and how best to help prevent and treat them, but more information is always helpful.

That’s where Green-Ellis - whose mother ultimately relented and allowed her son to play football - comes in. The Patriots running back wore a cutting-edge chin strap during last night’s 21-17 loss to the Giants in the Super Bowl that detects when a player has absorbed a hit to the head that strongly recommends medical attention.

The Impact Indicator, made by Battle Sports Science, can alert coaches, trainers, and even game officials to a situation where a player who has been hit should leave for observation. Green-Ellis, who said he’s never had a concussion - “No, not that I know of’’ - quickly signed up when asked if he would be willing to wear the strap.

“I’m really wearing it just to improve the awareness for parents and things like that,’’ said Green-Ellis, who rushed for a team-high 44 yards on 10 carries. “You see all the concussion hits that have been going on in the NFL, and I just want to bring up the awareness.’’

According to the company’s website, the Impact Indicator uses sensor technology to measure and calculate the force and duration of a hit to a player’s helmet. If it measures a hit that reaches a certain level, a light on the chin strap turns red, starts blinking, and alerts others to the potential danger for the player who took the hit.

With so many concussions being diagnosed in football, and numerous others that go undiagnosed, even at the youth and high school levels, it also would give nervous parents watching their children a sign to look for.

“You see your child out there, you don’t really know what’s really going on, but if you can see the light is blinking, then you can have a coach or somebody check them out,’’ Green-Ellis said. “It can do more for concussion tests because it’s something that’s really been serious.’’

Green-Ellis, 26, a fourth-year pro who led the Patriots in rushing this season with 667 yards and 11 touchdowns, has been wearing the Impact Indicator for a few weeks. Despite the newness of the product and the technical component it features, he said neither the strap nor his helmet feels different, and he didn’t expect it to be a distraction.

Fun? Some might question whether it’s fun to get hit, even when wearing pads and a helmet. But if advancements can be made in detecting possible concussions and a quicker medical response is available when someone takes a hit to the head, maybe hesitant parents will be more willing to let their children suit up and take the field.