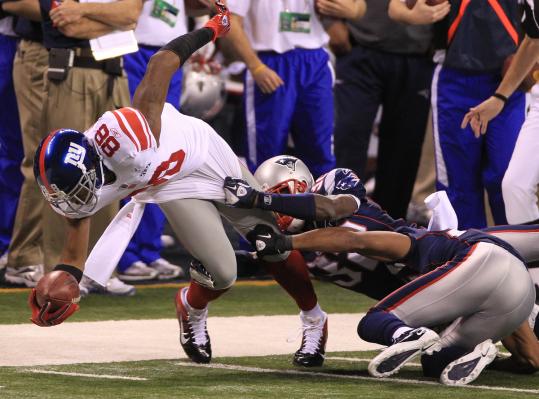 INDIANAPOLIS - They did their part. And then some.

When the book is written on the 2011 Patriots, the record will show that the much-maligned and much-talked about defense was not the Achilles’ heel of this team, like some thought it was.

The Patriots’ defense did enough to win Super Bowl XLVI.

It was the offense that let the Patriots down in the 21-17 loss at Lucas Oil Stadium.

“They did a great job, they really did,’’ receiver Deion Branch said about the defense. “And we knew that going into the game. It was all going to be on what we did on offense as far as putting points on the board and scoring touchdowns instead of kicking field goals. We were just a little inconsistent. It just wasn’t enough today.’’

The Patriots knew the Giants had the potential to be explosive on offense, and New England decided to take a conservative approach on defense. And it worked wonders for most of the game.

“I tip my hat to them,’’ said Giants offensive coordinator Kevin Gilbride. “They had a sound approach: don’t let us get one-on-one matchups so we couldn’t get the big play - we’ve been very effective with that. Prove that we could be disciplined enough to take these long, methodical drives and put it in the end zone. Sure enough, we kept shooting ourselves in the foot. Their strategy was working.’’

The Giants opened with a 10-play drive, but it only amounted to 35 yards and a punt.

It was the offense that took a safety on the first snap of the game, which not only cost the Patriots 2 points, but it put the defense right back onto the field.

The Giants scored their only true touchdown of the game on that drive to lead, 9-0.

The Patriots’ defense pitched a shutout for the next 26:41 of game time, which allowed the offense to rip off 17 straight points.

And then the Patriots didn’t score after the first possession of the second half.

The defense held the Giants to two field goals in the third quarter while the offense did nothing after the opening-drive TD.

“They did a great job,’’ receiver Wes Welker said of his team’s defense. “They kept us in it, got the ball out, did a lot of great things out there. In the end, it just wasn’t enough.’’

The Patriots were not going to let receiver Victor Cruz beat them. He had only four catches for 25 yards as Kyle Arrington did a tremendous job in the slot, with help over the top.

“Specifically on third down they were bracketing me - keep one guy underneath, one over top - so a lot of credit to those guys defensively because they did a good job,’’ Cruz said.

“They kind of just forced us to run the ball a little bit. We saw that and just took advantage of it. I feel like we gashed them in moments where we thought we could win the game.’’

With Cruz taken out of the game, the Patriots were going to force quarterback Eli Manning, who had to play most of the game without his top two tight ends after Jake Ballard and Travis Beckum left with injuries, to beat them with very difficult throws outside the numbers.

That strategy worked well. There was little the Patriots could do when receiver Mario Manningham made a sensational 38-yard reception over cornerback Sterling Moore and safety Patrick Chung to start the final drive, getting the Giants to midfield.

“We were in Cover 2 [two deep safeties] and I have to get a better jam on him to give Patrick a chance to get over the top,’’ Moore said. “I put that on myself.’’

Moore’s being too hard on himself. Sometimes you just have to tip your cap to the opponent. Some plays are indefensible, and that was one of them.

If there was a problem defensively, it was that the Patriots couldn’t generate enough pressure on Manning in the fourth quarter.

The Patriots had their way with the Giants’ offensive line for most of three quarters with three sacks, three quarterback hits, and several pressures.

“They’ve been playing well, better in the last few weeks, and I think their approach was an intelligent one: slow the game down, not give us the big plays, force us to short gains underneath, run the ball, what have you, and it was working,’’ Gilbride said. “Even though we were holding onto the ball and moving it, we weren’t putting it into the end zone. It was shortening the game, keeping their offense off the field and hurting them from that standpoint, but it was certainly denying us the areas that we’ve been most potent in and that’s some big plays in one-on-one situations.’’

Late in the game, the pressure vanished. The Patriots failed to make Manning feel as uncomfortable as the Giants defense did to Tom Brady late.

“I think they were getting the ball out quicker,’’ said end Mark Anderson, who had 1.5 sacks and a quarterback hit as he dominated left tackle David Diehl early. “Eli had a good game. They were doing a lot of chipping with the backs, but we still should have gotten after it.’’

Maybe they should have, but the defense had done its job.

There will be plenty of time to reflect on the season as a whole, but that unit came together in ways many thought impossible.

Anderson revived his career and proved more than just a situational pass rusher.

Rob Ninkovich was a jack of all trades and found a way to make plays when the team needed him to.

Vince Wilfork dominated at times, and set the tone for younger players like Kyle Love and Brandon Deaderick - who both have bright futures.

Even Shaun Ellis proved some worth in the Super Bowl by holding the edge.

Jerod Mayo and Brandon Spikes should be a tough duo if they can stay healthy. It was puzzling Tracy White got the call at the other outside linebacker spot, but the coaches smartly inserted a better Dane Fletcher in the second half.

And the secondary, it was much better as a whole than taken individually.

Sterling Moore showed the type of ball skills that will enable him to be a player when he gets more experience.

Arrington took on the toughest assignment and did what many thought was impossible: making Cruz a non-factor.

Antwaun Molden definitely had issues, but he took his coaching and made the best of his abilities.

At safety, Chung can be a star if he can stay on the field.

Devin McCourty brought stability at a position that was a train wreck early in the season. And James Ihedigbo brought leadership and the type of every-down, in-the-box safety play that the Jets thought he lacked when they let him walk.

Can the Patriots get better from a talent perspective on defense? Certainly.

But I’m not sure they could have played much better last night as a group.

And they did it on the biggest stage.

You couldn’t ask anymore of the defense. Holding that Giants offense to 15 points until that late touchdown, when the Patriots allowed the Giants to score, was the type of performance many thought they weren’t capable of. But they proved us wrong.

The Patriots defense had a winning performance.

The offense did not, and that’s why the Patriots lost this Super Bowl.

“This is a team sport. We don’t really split the team up, special teams, offense, defense, it’s all about wins and losses,’’ said Mayo, ever the captain. “We had our struggles in the regular season and offense carried us. In the playoffs we were playing pretty well, just unfortunately we weren’t able to make enough plays.’’