Among the elite, Manning states case 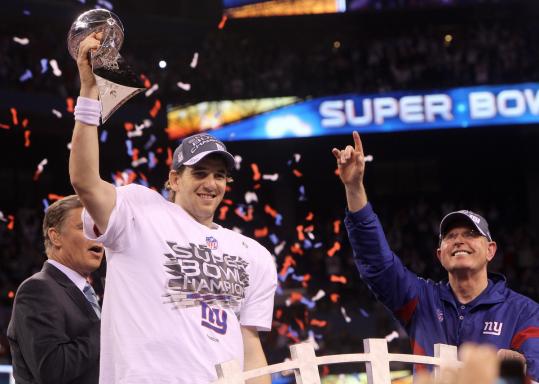 INDIANAPOLIS - It would have been impossible for Eli Manning not to hear it.

He was surrounded by it from the second the Giants bus pulled into the Indianapolis Downtown Marriott last Monday.

Peyton Manning this. Jim Irsay that. Nerve regeneration this. He’s healthy enough to play that.

Eli was playing in his second Super Bowl. But he was doing it in Lucas Oil Stadium, the house that Peyton built.

And that was just one of the shadows Eli Manning was playing in.

For the second time, he was playing on football’s biggest stage against Tom Brady, arguably the greatest quarterback of his generation.

He had beaten Brady in their last Super Bowl matchup, but in that game his receivers made miracle catches off their helmets. It wasn’t necessarily a fluke, but it wasn’t enough to stop critics from questioning Manning’s abilities.

Manning was aloof. He was soft. He made goofy faces. But most of all, he wasn’t an elite quarterback.

He wasn’t Aaron Rodgers or Drew Brees or Brady.

When Manning tried to say he was, it didn’t do any good.

“At the beginning of the season people mocked him,’’ said teammate David Diehl. “People laughed at him when he said he was an elite quarterback, and he had that confidence in himself and he went out and showed people what he was all about.’’

In the regular season, he quietly threw for nearly 5,000 yards - the best season of his career. He led the Giants out of a slump and onto a playoff run that landed them in Super Bow XLVI last night.

But the win, he said, wasn’t about him at all.

“I’m excited to win a championship,’’ said Manning. “I’m excited for my teammates. There are a number of guys, this is their first one. There are some other ones who are getting their second and more, but I’m just excited for them. I’m excited for Coach Coughlin, all of the coaches and the Giants organization.

“This isn’t about one person. This is about a team coming together, getting this win. I’m just proud of our guys, proud of the team and how we fought all year. We never got discouraged, kept their faith and kept their confidence and just fought to the very end.’’

Faced with going up against Brady again, Manning was sharp from the start and clutch at the finish. The fourth-quarter comeback has become his calling card and last night was no exception.

He was 30 of 40 passing for 296 yards and a touchdown, and with 3:46 left in the fourth quarter he marched the Giants down the field for the go-ahead drive in their 21-17 win. He completed 9 of his first 9 passes, a Super Bowl record. His first six went to six different receivers.

But it wasn’t about the numbers.

He was poised, he was sharp, and in a Super Bowl MVP performance he was the Giants’ leader.

“He deserves all the credit in the world because he really has put the team on his shoulders all year and performed very, very well,’’ said coach Tom Coughlin.

He now has more rings than Brees and Rodgers and Peyton. And even though Brady has three, his two Super Bowl losses have both come at the hands of the youngest Manning.

“I’m putting Eli in his own category man,’’ said wideout Mario Manningham, who tapped his toes along the sideline to catch a 38-yard pass on the game-clinching drive.

Manning did everything to ignore the talk. He said he didn’t plan on having dinner during the week with family. After the win he said he hadn’t yet talked to Peyton. The comparisons were going to come regardless, but he’s found the best way to deal with them.

“We know how elite he is,’’ said Victor Cruz. “I don’t know what else the guy has to prove at this point. Coming up in clutch situations, making great plays, it’s just a testament of his character the way he’s carried himself this whole year.’’