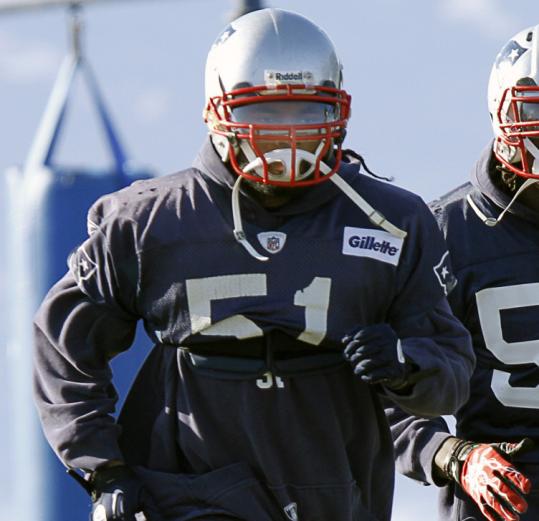 Linebacker Jerod Mayo hasn’t missed a game this season, and he has dished out a healthy dose of punishment on opponents. (Robert E. Klein/For The Globe)
By Monique Walker Globe Staff / December 31, 2010

FOXBOROUGH — Patriots linebacker Jerod Mayo didn’t find out about his first Pro Bowl selection via the Internet or word of mouth. The news was delivered via a phone call from coach Bill Belichick.

When the season began, such phone calls weren’t on the minds of many on the Patriots defense. But while the unit has steadily improved after a sluggish start, Mayo has been among the constants.

In his third season, he has amassed a career high in tackles (186), recovered three fumbles, and been the leader of a young group scrapping for consistency.

“He’s the quarterback of our defense,’’ said safety James Sanders. “He runs the show. He’s making checks and putting guys in the right spots to make plays and playing at a high level.’’

Mayo, in his second season as a defensive captain, hasn’t missed a game. His comfort level and confidence have been on display much of the year. Last year, Mayo spent a good part of the season trying to catch up after injuring his knee in the opener. He missed three games but still managed 114 tackles.

When Mayo returned for 2010, he said he benefited from a strong offseason and didn’t sense any trouble with his knee. Instead of worrying about injuries, he could focus on the mental aspects of the game and working with nose tackle Vince Wilfork to unite a defense that had youth, undrafted players, and veterans.

When breakdowns occurred, Mayo and Wilfork could be seen walking to the sidelines together discussing the play. In those moments, Wilfork said, communication needed to improve. In time, Mayo spoke up and exchanged ideas with Wilfork that eventually led to the defense becoming more cohesive.

“I think when we do have breakdowns, that’s where they start at, with communication,’’ said Wilfork. “I think, for myself and other guys on this team, defensively, we recognized that was a problem.

“Mayo, he’s grown into a great leader. He listens. He gives his opinion. I listen, and I think we both help each other. At times you’ll see us out there and you may think we’re arguing [but] we’re talking.

“And at times you may see us smiling a lot. Communication is a big, big part of what we do around here and being successful. The more communication we do, it helps us in the long run.’’

Mayo has caught the eye of opposing coaches, including Miami’s Tony Sparano, who in 2008 had the chance to meet with Mayo before the draft and was impressed.

“I think that the guy gets off blocks and can find the ball in a hurry, and I think he’s a brilliant, brilliant guy,’’ said Sparano. “I remember sitting in the room with him at the combine and talking football with him, and I just couldn’t get over how intelligent a player this guy really was.

“To have him in the middle of that group there and setting the table for you, that’s a heck of a luxury to have. When you get one of those guys, you realize how valuable they really are to your football team.

“I think getting off blocks and him getting to the ball and finding the ball has been the biggest thing I’ve been impressed with.’’

If Mayo hits the 200 mark in tackles, he would be the first Patriot to do so since linebacker Steve Nelson in 1984 (207). He also is jumping in on the turnover frenzy, as he has recovered three fumbles this season; the team record is five.

Wilfork said Mayo racks up the tackles because he is in the right place at the right time.

“I think he’s probably one of the best at what he does,’’ Wilfork said. “He’s very talented. He has the brains. He can run. He can tackle. He’s physical. He’s big. He’s strong. The list goes on about the guy and he’s a great guy outside of football. So I’m glad he’s a teammate of mine.

“There are a bunch of guys on this team that are like that, but I’m very fortunate to play with a young guy like that who’s got his head on straight on and off the field. That’s a very, very positive message around the league, when you have guys like that.

“But we help each other on the field. Things I do help him on the back end, things he does help me on the front end. One hand washes the other out there on Sundays.’’

Mayo may be having a career season, but he isn’t satisfied with big numbers.

“I think it’s been a pretty good year, but I still see room for improvement,’’ Mayo said. “Every time I watch film, there are always plays that I want back.

“Our record speaks for itself. We’re doing pretty well right now, so [we’re] trying to keep it rolling.’’