Moss will be well-received

He still has admirers left in Foxborough 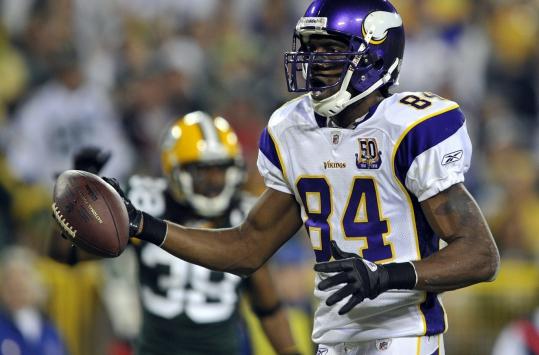 Randy Moss is wearing a different uniform now, but many of former mates are looking forward to seeing him. (Jim Prisching/Getty Images)
By Monique Walker Globe Staff / October 27, 2010

It has been 21 days since the Patriots parted with Randy Moss. Now he is five days away from returning to Foxborough.

This weekend will mark the first time that Moss arrives at Gillette Stadium as a visitor since 2005, when he was with the Raiders for a season opener that ended in a 30-20 victory for the Patriots. Moss had five receptions for 130 yards and a touchdown in that game.

While Moss may be returning as a Viking, he is expected to be welcomed by his former teammates.

When it comes to playing against opponents who are also friends, Mayo said the best time to talk is after the game because “during the game, it’s all about business, and that’s how I’m approaching this game.’’

Patriots quarterback Tom Brady said he has exchanged text messages with Moss since the trade but he expects any communication will happen after the game.

“Probably after the game,’’ Brady said on WEEI yesterday. “That’s how I like to do it. I see guys after the game. Getting ready to play a game, not the best to talk and hang out and b.s. I’ll wish him luck maybe if I see him, but I will certainly say hi to him after the game.’’

Patriots owner Robert Kraft said he is excited to see Moss return to Gillette Stadium and continues to praise the receiver.

“He created a certain buzz and electricity in our locker room,’’ said Kraft. “He was special and unique. He made many great contributions to the Patriots.

“You think of the ’07 season, which was really remarkable. Unfortunately, we didn’t win a championship, but we accomplished something very special and he was a big part of that. He and [Brady] broke the record for quarterback-receiver touchdowns, so he’s a great player.

“I’m sure he’ll be motivated. We still have affection for him. When he was here, he made certain commitments to me of how he would play and conduct himself, and he did that, so we thank him for what he did for us.’’

Brown came up with a key play at the end of Sunday’s 23-20 victory against the Chargers when he wrapped up tight end Antonio Gates and stopped him short of a first down. Brown picked up more snaps because safety Patrick Chung left the game with a knee injury.

The Patriots originally signed Brown as an undrafted free agent out of Notre Dame, where Corwin Brown was the defensive coordinator before joining the Patriots this season as a defensive backs coach. Nick Caserio, the Patriots director of player personnel, said Sergio had several qualities that interested the team.

“He’s a big guy. He’s got good size. He had good straight-along speed. He’s a good tackler,’’ Caserio said. “He played safety at one point and then he ended up playing a lot of the slot position or the nickel position. So there was a little bit of position flexibility and versatility.

“And then he’d played in the kicking game as well, so I think there were some attributes that we liked that we saw on tape that we thought he’d be a player that we might want to work with moving forward.

“He made the most of his opportunities to this point. Hopefully, he will continue to improve each week.’’

No word on Chung
With the players off yesterday, Belichick did not have an update on Chung and did not confirm reports that he could be out a couple of weeks. Belichick said any updates would be given today . . . A contingent of Patriots planned to be at the Celtics-Heat game last night. Vince Wilfork and Mayo said they both planned to attend, as did Kraft. Brady has been spotted at Celtics games in the past, but he wasn’t planning on going to this one. “I got work to do,’’ said Brady. “I got a big football game this weekend.’’
If you build it . . .
A few Patriots used their off day to join more than 200 volunteers building a playground at the Waltham Boys & Girls Club. Wilfork, Sammy Morris, Brady, Stephen Neal, Gerard Warren, and Rob Gronkowski were among the many players who participated. Actor Donnie Wahlberg, a Boston native, also arrived for the event. Watching the Patriots win close games and grind out victories is what he loved about the team years ago, and now they’re doing it again. “That’s Patriots football, and they’re playing it again,’’ Wahlberg said. “If nothing else, that makes New Englanders proud. That’s what we want to watch. If they don’t win a Super Bowl, so be it, but they’re playing Patriots football again, and that’s what I want to see.’’