Opportunity spied, no secret that he’ll take it 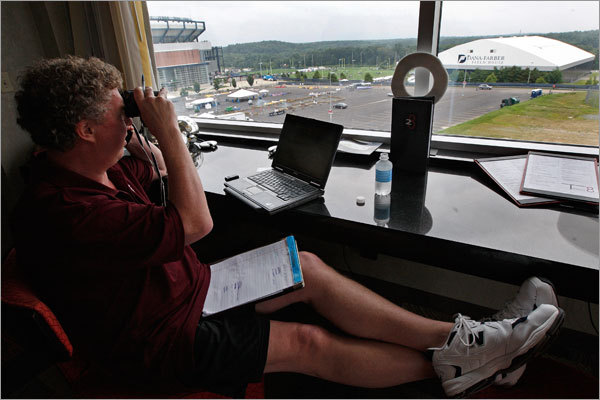 (Globe Staff / Barry Chin) A comfy Dan Shaughnessy has a nice view of the Patriots' practice field from the fifth-floor concierge lounge at the Renaissance Hotel and Spa at Patriot Place ...
By Dan Shaughnessy Globe Columnist / July 30, 2009

FOXBOROUGH - I am set. I’ve got my General Rommel field glasses in hand. I’ve got videocams and decoder rings. I’ve got Bill Parcells and Bill Polian on my shoe phone’s speed dial.

I have a season-long time share at the new Spy Hotel built on the vast acreage of Patriot Place. Top bidder gets the scoop.

There will be no more secrets at Patriots practice. From this point forward, Bill Belichick’s playbook is an open book.

Media members barred from practice? Come on up to Chez Shaughnessy, you ink-strained wretches. Let the Spy Hotel’s concierge lounge be the media lounge (free apples and mini waters). Play ball with the Globe and you might find out what Tom Brady’s going to call in the first series in the first game against the Bills Sept. 14.

Hmmm. Wonder what Eric Mangini would pay for a key to my room at the swanky Renaissance Hotel & Spa at Patriot Place?

This is unbelievable. This is the greatest. No organization in the history of sports is more steeped in secrecy and self-importance than the Bill Belichick Patriots. And now Bob Kraft has built a Spy Tower adjacent to the heretofore hermetically sealed practice fields. For just a couple of hundred bucks a night and a Marriott rewards card you’ll know which QB is taking all the snaps. Every day.

It is as if Bill Gates gave us his Amex number and expiration date. It’s as if Hef gave us the keys to the Mansion.

Taping walk-throughs? That’s nothing. From the concierge lounge on the fifth floor you can steal the entire game plan.

Brady practiced with the rookies yesterday. How do I know? Easy. I looked out my fifth-floor room.

Napoleon had Waterloo. Nixon had Watergate. Belichick has the Renaissance Spy Tower.

Nathan Hale, Mata Hari, Julius and Ethel Rosenberg, Moe Berg, Matt Estrella, and now Shaughnessy. We are international men and women of mystery. We know things. We have information that is of great value.

OK, I’m exaggerating. This is never going to fly on the Globe expense report and I wouldn’t know a Cover 2 defense from a covered wagon. A few small trees impede the view of the fields. And the really bad news is that once the Patriots resume closed practices they plan to erect a screen to block the hotel’s fifth-floor lookout.

It figures. Secrecy and football go together like spaghetti and meatballs. When Patriots training camp opens this morning (rookies have been working out since Monday), reporters will receive a packet that includes “General Media Training Camp Policy’’

1. Please do not report on offensive or defensive strategy. This includes describing formations, personnel groups or non-conventional plays.

2. Please do not quote, paraphrase or report the comments made by coaches or players during a practice session.

3. Please do not report on practice until the practice session is over.

That means you, too, Joe from Revere. Practice is open to the public from now until Aug. 18 and the Patriots don’t want any tweeting if somebody hears Belichick yelling at Laurence Maroney.

It reminds me of my days covering the Celtics under the ever-paranoid Bill Fitch in the early 1980s. During a morning practice at the Summit in Houston, Fitch spotted a suspicious figure lurking in a chair at the top of the arena.

“It was great,’’ recalled Kevin McHale. “Bill thought this guy was spying on us so he had [assistant coach] Jimmy Rodgers run up about a million stairs to get to the guy. Jimmy looked like Rocky Balboa running up there and when he got to the top it turned out to be a janitor blowing dope on his break. Hilarious. It’s not like we had anything to hide. The Celtics ran the same six plays for about 100 years.’’

The Renaissance opened a couple of months ago. After a VIP tour for reporters, intrepid Sun Chronicle reporter Mark Farinella took note of some remarks by Jonathan Kraft indicating that Belichick was not happy with the hotel’s top-room views. Farinella checked it out with his own videocamera and delivered the startling view to his readers.

Now the Globe’s here. And I’m expecting Senator Arlen Specter any day. What a development. Patriot Place is equipped with more security cameras than the Pentagon and many an innocent bystander has been chased away by team officials hired to secure the area. But a room at the Renaissance gets you the Full Monty (not to be confused with Monty Beisel). At least until the screen goes up.

What do the Patriots think of the Spy Hotel?

“Berj [Belichick’s right arm, Berj Najarian] came in and liked the view of the stadium from the club lounge,’’ said hotel GM Mark Jeffery. “Of course, he said that perhaps some of the opposing teams might like it, too. I haven’t been privy to anything they are going to do and we haven’t modified any labor model from a security standpoint.’’

Will representatives of the New York Jets be welcome?

“We are in the business of selling rooms,’’ said Jeffery.

Like myself, the Jets will be disappointed when the blockade goes up.

“We’ve known about this for some time,’’ said Patriots killjoy publicist Stacey James. “It’s funny because I’ve had national writers come up and sort of whisper, ‘You know, you can see the field from the fifth floor of the hotel.’ Like we hadn’t noticed. We noticed. But once those screens are installed, you won’t be able to see the practice fields from there.’’

That’ll be checkout time for me. 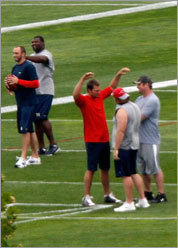 (Globe Staff / Barry Chin) ... from where he could easily and clearly see quarterback Tom Brady (in red) gesturing to a couple of teammates while others tossed footballs.