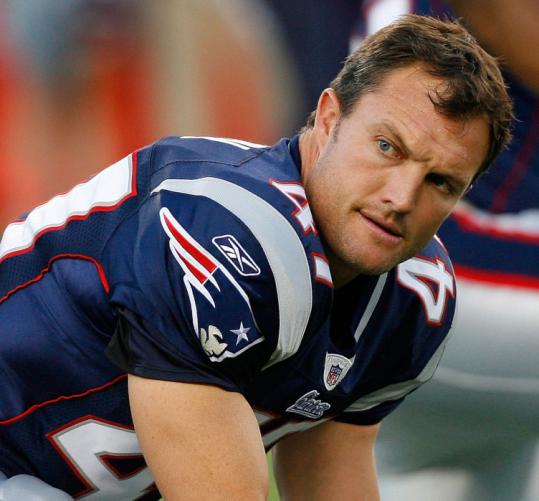 John Lynch's dismissal could be only temporary. ''I would not rule anything out down the road,'' said Bill Belichick. (Jim Rogash/Getty Images)
By Mike Reiss Globe Staff / September 1, 2008
Text size – +

FOXBOROUGH - The games haven't started yet, but these are still wild times in the National Football League.

As teams begin shifting their preparations into a higher gear for next weekend's season-opening action, they also are shuffling parts of their 53-man rosters. The dizzying pace was evident at Gillette Stadium yesterday, with the Patriots making a series of moves that included releasing veteran safety John Lynch (perhaps temporarily) and third-year receiver Chad Jackson.

As the locker room doors swung open at 10:45 a.m., here was how it unfolded over the next five-plus hours:

11 a.m. - Wide receiver Randy Moss, who had spoken with reporters just once during training camp, entertained questions in front of his locker, which is to the right of Tom Brady's. Moss ex pressed excitement about the start of the season, and having Brady back in the huddle.

"I don't think [it's] just me, but I think the whole team is ready for Tom to come back," he said, resting his right foot on a chair. "I think that he is the leader of this team, and he does some great things out there on the field with that ball. You know, he really wasn't out there with us in preseason. I guess that's a good thing, but we'll see Sunday [vs. the Chiefs]."

Moss isn't worried about his timing being off with Brady because the two haven't played together in the preseason.

Moss reiterated his thoughts from the end of camp that he's nervous entering the season because it will be a challenge to match the production of last year's offense.

11:15 a.m. - Safety Rodney Harrison arrived at his locker and was met by a small crowd of reporters. He was asked about Saturday's surprising news that cornerback Fernando Bryant - who had been running with the first unit - was released.

"I didn't even know. Fernando Bryant? Wow," he responded. "That's the first I've heard of it."

Players had been off Saturday, and most were returning to the stadium for the first time since cuts were announced. The locker room had a different look upon their return, as the temporary blue lockers in the middle of the room were removed, and the rookies who occupied them now had more permanent wooden lockers on the perimeter of the room.

11:30 a.m. - Saturday's cuts were a hot topic among some of the team's less-heralded players. "It was a nerve-racking day," said rookie cornerback Jonathan Wilhite, a fourth-round draft choice who looked to his right and saw Bryant's emptied locker.

Wilhite relayed that he didn't receive any notice that he'd made the team, so he figured no news was good news. Earlier in the morning, fifth-round draft choice Matthew Slater explained that he wasn't so sure, so he called his father, Hall of Famer Jackie Slater.

"I definitely was on edge, I was trying to stay calm," he said. "In my situation, 4 p.m. came and went. I called my dad and was like, 'Dad, how did they do it when you were playing?' I didn't really know what was going on. I didn't get contacted so I figured things had worked out."

12:26 p.m. - News broke that the Patriots informed Jackson that he had been released. Jackson already was back at his area residence playing the Madden video game, starting a 24-hour wait to see if another team would claim his rights. A second-round draft choice in 2006, Jackson did not fulfill the potential the Patriots envisioned for him when they traded up to select him that year. Later, his agent David Canter said, "It's disappointing. It might be the type of thing where it's a perfect change-of-scenery type of thing."

3:05 p.m. - On a sun-splashed day, the Patriots hit the practice field wearing shorts and light shoulder pads, and Brady, who didn't play a snap in the preseason because of a sore right foot, was among those present. During the time media members were at practice, Brady jogged from sideline to sideline, took his customary front-row spot for stretching, and chatted with Bill Belichick. He later ran to one end zone, darted through an agility drill, then worked on dropping back to pass and delivering an accurate throw to a stationary target about 20 yards away. He appeared to be moving well. In addition to Brady, receiver Wes Welker, who injured his ribs Aug. 22 against the Eagles and has been sidelined since, also was present.

3:16 p.m. - While reporters kept an eye on the team's practice, the Patriots issued a news release indicating that Lynch - the 16-year veteran and likely Hall of Famer who had signed a one-year deal Aug. 15 - had been cut. The Patriots, in a break from the standard news conference, included comments from Belichick and Lynch that made it sound as if Lynch could be back.

"It goes without saying but John is an all-time great safety, one of the league's classiest professionals, and his elite play speaks for itself," Belichick said. "As has been the case in other situations, I would not rule anything out down the road."

Said Lynch, "I have no regrets about my time thus far with the Patriots. The immense respect that I've long held for the organization has been only heightened over the past couple of weeks. I am going to keep all options open and look forward with excitement to see what the future brings."

3:16 p.m. - In that same news release, the Patriots announced that six players had been signed to their practice squad, all of whom had been with the team in training camp - defensive lineman Titus Adams, safety Mark Dillard, running back BenJarvus Green-Ellis, linebacker Vince Redd, cornerback Mike Richardson, and defensive back Antwain Spann. All were present for practice. QB Matt Gutierrez, a mildly surprising cut Saturday, was not on the list and was not claimed by another team, making him a free agent.

4 p.m. - Media reports surfaced in St. Louis and New York that the Patriots had claimed Rams offensive lineman Mark LeVoir and Jets tight end Jason Pociask, adding them to the two open spots on their 53-man roster. The Patriots put in a claim on former Saints guard Andy Alleman, but he was awarded to the Dolphins because teams with a worse record get priority on waivers. They also claimed Eagles guard Scott Young, but he was awarded to the Browns. The Patriots did not officially announce those moves yesterday.

All told, it was a day for juggling multiple balls in the air - from roster cuts, to waiver claims, to beginning more intense preparations for the opener.

Harrison, the safety entering his 15th NFL season, has been through it all before.

"The sense of urgency is there, a greater importance," he said. "Right now the bullets are flying for real. It's time to get serious."

Christopher L. Gasper of the Globe staff contributed to this report. Mike Reiss can be reached at mreiss@globe.com.