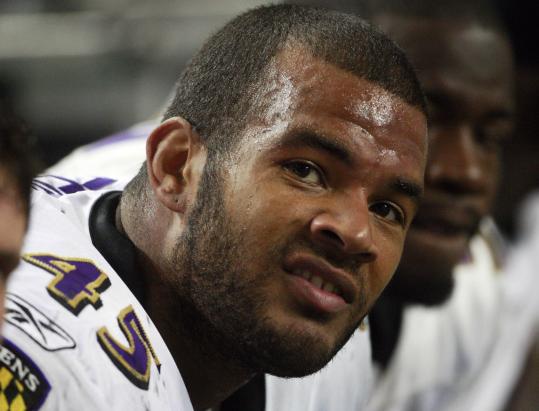 Tony Fein was released by the Ravens in their last major round of roster cuts on Sept. 5. (David Martin/Associated Press)
By Tim Klass Associated Press / October 9, 2009

SEATTLE - Tony Fein, an Iraq war veteran and NFL rookie linebacker who played with the Baltimore Ravens during the preseason, died of unexplained causes after collapsing at a friend’s house on the Kitsap Peninsula of Washington State.

Mr. Fein, 27, an undrafted rookie free agent from Mississippi, was lying face down and unconscious, vomiting and barely breathing when medics arrived at a house outside Port Orchard just before 9 a.m. Tuesday, said Mike Wernet of South Kitsap Fire & Rescue.

He went into cardiac arrest during the drive to Harrison Medical Center in Bremerton, across Puget Sound from Seattle, and was pronounced dead at 9:48 a.m.

A man and woman said Mr. Fein was a friend who was staying with them.

There were no obvious wounds or signs of alcohol or other drug abuse, and nothing indicated foul play, Wernet said.

An autopsy will not be conducted before today, and no report will be issued before all toxicology and other tests are complete, said Allen G. Gerdes, Kitsap County chief deputy coroner.

Mr. Fein, a native of Port Orchard, was released by the Ravens in their last major round of roster cuts on Sept. 5.

“We were proud to have him here as part of our team,’’ he said.

Mr. Fein’s agent, Milton D. Hobbs, said he last spoke with Mr. Fein Friday and since the death had talked with Mr. Fein’s sister, mother, and some friends.

“He was working out, and we were discussing football opportunities,’’ Hobbs said. “That was still his goal. We talked about Canada.’’

Some Canadian Football League teams had expressed interest in Mr. Fein before he joined the Ravens, but there had been no contact since he was cut, the agent said.

Mr. Fein was arrested on Aug. 23 and charged with misdemeanor assault on a police officer after an incident at a restaurant at Baltimore’s Inner Harbor in which the officer reportedly mistook a cellphone for a handgun.

A trial was scheduled, but prosecutors notified Mr. Fein’s attorney last Thursday that they planned to dismiss the case because of conflicting witness accounts.

Mr. Fein played quarterback for South Kitsap High School, graduating in 2000. At age 19, he enlisted in the US Army and spent 2 1/2 years in Iraq as a 19 Delta reconnaissance scout.

He later enrolled at Scottsdale Community College in Arizona, became one of the nation’s top junior college recruits, and played for Ole Miss in 2007 and 2008.

“Our hearts definitely go out to his family, because it’s such a tragedy for a man to be that young and go through the things he’s been through.’’