THIS STORY HAS BEEN FORMATTED FOR EASY PRINTING
College basketball roundup 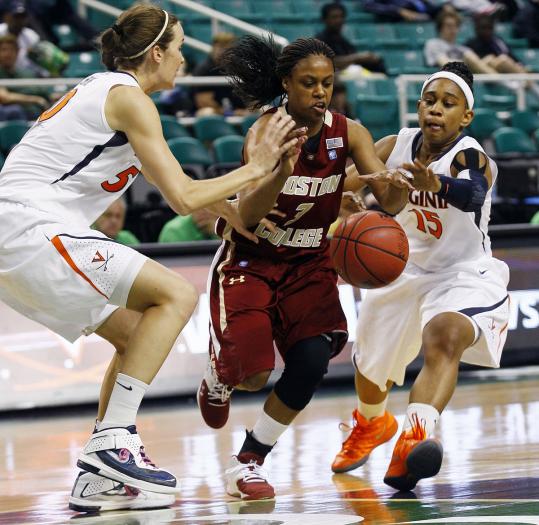 Ariana Moorer also scored 20 points for the sixth-seeded Cavaliers (22-9), who led big all night to give first-year coach Joanne Boyle a win in her tournament debut. Virginia will face No. 6 Maryland in tonight’s quarterfinals.

America East tournament - Samantha Baranowski’s 16 points led Maine to its first tournament win since 2006 in a 49-43 victory over the ninth-seeded Seawolves in the opening round in West Hartford. Eighth-seeded Maine will play top-seeded Boston University today at noon.

Patriot League tournament - Sophomore Christine Ganser came off the bench to score a team-high 17 points, hitting all six of her shots from the field, and Holy Cross advanced to the semifinals with a 59-50 win over Army at West Point, N.Y. Holy Cross (17-13) will travel to top-seeded American University Monday. Ganser made a key basket with 1:48 left to extend the Crusaders’ lead to 55-49.

Northeast-10 tournament - Caleigh Crowell made a 3-pointer with seven seconds left in regulation to tie it, another in the second overtime to key a 7-0 run, and Bentley outlasted Franklin Pierce, 69-65, in the semifinals at Waltham. The Falcons (26-3), ranked sixth in Division 2, shot just 26 percent from the floor, and were led by Lauren Battista and Courtney Finn (18 points apiece). The Ravens (19-9) got a tying triple of their own with 23 seconds left in the first overtime from Tiffany Johnson . . . In New Haven, Moni Smith-Ocran’s layup with 24 seconds left pushed second-seeded Southern Connecticut State past third-seeded Pace, 48-47, and into the championship game.

Michigan can claim a share of the conference title with a win Sunday over Penn State and an Ohio State win over Michigan State.

Miller scored 15 of his 18 points in the second half, and got just free enough from Sammy Zeglinski in the final seconds to make the shot from deep in the right wing. It was Miller’s fifth 3-pointer and the seventh for the Seminoles.

America East tournament - Ben Dickinson scored 21 points and pulled down a team-high nine rebounds as Binghamton (2-28) beat Maryland-Baltimore County, 73-67, in overtime of the first round in West Hartford.