BC's entrepreneurial Crawley is a coach with sideline savvy 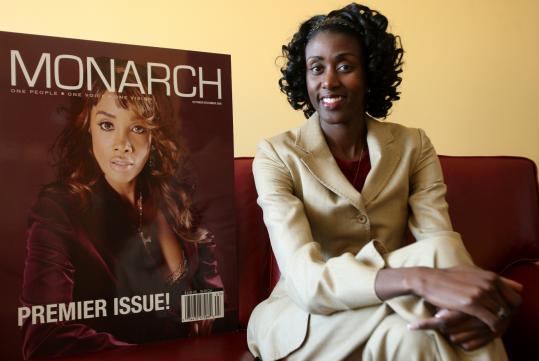 Sylvia Crawley doesn't want to tug at her sleeves while coaching the Boston College women's basketball team. On game day, the last thing Crawley wants to worry about is whether her suit is comfortable for her 6-foot-5-inch frame.

So Crawley designs her own clothes. Pants for a woman with a 38 1/2-inch inseam aren't available off the rack. She sketches, clips out ideas, and sends them to a tailor, who creates her vision and ships them back. The suits hang in her closet, organized by color.

"If there is something that bothers you about the world, you can complain or you can do something about it," Crawley said.

Crawley discovered early on that she held a passion for fashion. Growing up in Ohio, she designed prom dresses for herself and her friends. When her North Carolina team won the NCAA title her senior year, she designed the ring.

Crawley could be introduced by any number of titles - from BC coach to clothing designer to co-publisher of Monarch Magazine, a publication geared toward African-American professionals.

And that wouldn't include her role as captain of the 1993-94 Tar Heels national championship team, her professional basketball career, or her 1998 American Basketball League slam-dunk title.

The 36-year-old Crawley has used basketball as a means to other opportunities, and it is a lesson she frequently shares with her players.

"I have a lot of friends who no longer play professional basketball, and they're really struggling in life to make it," Crawley said. "It's my job to make sure these players graduate, so they don't put all their eggs in one basket."

Summer internships are encouraged while weight training is squeezed in. If an employer is looking for experience, Crawley wants her players to be prepared.

"It's my job as a coach to make sure they figure it out so that basketball does not use them, and when it's over there's a way that everybody can get what they want," Crawley said. "We can win, but they have to worry about graduating and being prepared for life."

The message to student-athletes isn't new, but the Eagles are able to see an example every day.

"She understands a lot of what I'm going through, whether it's basketball or not, and that insight is very valuable to me," BC sophomore center Carolyn Swords said.

There is plenty for Crawley to balance in a season, but coaching is her first priority. Many of her other projects are established and run on their own. Crawley is dedicated to basketball because it is how she got her start.

Competitive nature
Crawley was often the tallest among her peers in her hometown of Steubenville, Ohio. James and Marie Crawley enrolled their youngest daughter in dance and modeling classes to help her develop poise and confidence. Basketball and track were athletic outlets.

Helen Crawley-Austin is the oldest of the three siblings, followed by her brother, Rex. At an early age, Sylvia Crawley took to competition, and her sister, who is 10 years older, and the neighborhood kids didn't mind beating her at a game of jacks. So Crawley became obsessed with the game.

"One night, she stayed up all night until she mastered jacks, and she said, 'I can play now, let's play,' " Crawley-Austin said. "I knew then she was a competitor."

By her senior year at Steubenville High, Crawley was being heavily recruited by some of the state's best programs, including Ohio University, from which her sister and brother graduated. But Crawley wanted to start a college career far from home.

North Carolina coach Sylvia Hatchell wanted the center. At the time, the Tar Heels were not the Top 25 team they have become, and they were struggling in the Atlantic Coast Conference. Hatchell is in her 23d season at North Carolina, but she can recall her recruiting visit to Ohio that year.

"I remember going to her house and watching her at an open gym," Hatchell said. "I remember it like it was yesterday. She had lots of potential."

Crawley trusted Hatchell, picked North Carolina, and moved to Chapel Hill, eventually calling it the best decision of her life.

During Crawley's freshman year, the Tar Heels won two games in the ACC, "and I probably cried every single day," she said. "Practices were always hard, and Coach would say, 'You have to work harder.' "

Moved by the message
Crawley took her game to a professional level, playing 12 years in 16 countries. She played in the ABL and WNBA before retiring in 2005. All the while, she was investing her money with a financial adviser. She was sketching clothing designs, and was mulling an idea to start a magazine with childhood friend Will Walters.

"Sylvia has been blessed with a determination, a perseverance, and a star of greatness that if you were intuitive enough, you could see it," said Walters. "She's always been an inspiration to me and hopefully the rest of those around her. Above anything else, that is why I wanted her involved with [the magazine]."

In 2003, the two began researching the project. They eventually bought 40 percent of an existing magazine and kept its staff to begin Monarch, a name chosen because it reflected royalty, prestige, and empowerment.

Crawley said she was moved by the magazine's message and its ability to reach the masses and show others what success looks like.

Early on, Crawley was involved in the more intricate details of the magazine but she now tends to see only the final proofs. Walters remains in Ohio overseeing production.

The first issue was on newsstands in October 2006. Although Crawley had seen the finished product, there was nothing like seeing it on sale at a store.

"I saw it there and it was almost like I heard my song on the radio," Crawley said.

Since then, the glossy pages have featured everyone from President Obama to Angela Bassett to Serena Williams.

As the magazine became established, Crawley was pursuing a coaching career. Stints as an assistant at North Carolina and Fordham led to her first head coaching position, at Ohio University. She spent two seasons in her home state, where she led Ohio to a 20-13 record last season, its first 20-win season since 1994-95.

Order on the court
After last season, Crawley stepped in to replace former BC coach Cathy Inglese, who resigned after 15 seasons. Crawley brought with her a staff of assistants who had head coaching experience.

"They all had something I didn't have when I became a head coach," Crawley said. "Anybody can lead followers; it takes a special person to lead leaders. I give everyone ownership of what we're doing."

The Eagles players didn't take long to research their new coach, finding a clip of her blindfolded dunk during the ABL dunk contest on the Internet.

With each road trip, they are getting to learn something else about Crawley. They talk about fashion or everyday life.

North Carolina will play at Conte Forum Feb. 19, but Hatchell said the date is not circled on her calendar. Instead, she is proud of what Crawley has achieved and what that will mean for her players.

"She has taken every advantage of her opportunities and she's listened and learned," Hatchell said.

"I say this to a lot of youngsters, that if you listen to people that have been there and done that, it can keep you from making a lot of mistakes and make your path and journey a little shorter, and I think she's done that."