At summer camps and workouts, high school athletes try to show their potential to college coaches 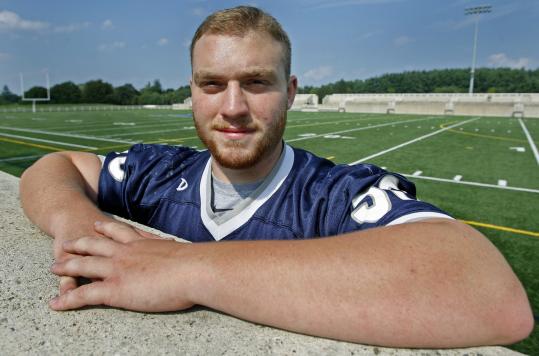 The physical attributes of a player the size of Bobby Vardaro are unrivaled in this area. Preparing for his senior season as the captain of the Phillips Andover Academy football team, Vardaro runs a shuttle in 4.7 seconds and broad-jumps over 8 feet. Lying flat on the ground, face first, he can raise his arms and legs, curl them up and have them touch.

Hard to believe, though, that at this time last year, the mammoth offensive tackle was a relative unknown on the football recruiting scene. Vardaro carefully put together his own highlight reel this past winter in the school’s technology lab, but it actually took a few pancake blocks on another player’s highlight film for him to be discovered.

But after an impressive showing in the middle of May at a combine in Connecticut, sponsored by Rivals.com, he received a scholarship offer from Tulane. Within a month, he had eight more Division 1 offers, including Boston College, Connecticut, Buffalo, Syracuse, and Vanderbilt. Scouts from Miami and Penn State were in attendance at his track meets, to witness his explosive abilities in the shot put (he’s thrown it 53 feet).

He verbally committed to Boston College after it offered a scholarship following their summer camp in June. He will join Winchester’s James McCaffrey, a wide receiver and returner at Buckingham, Browne & Nichols in Cambridge, among the players from the region who have committed to coach Frank Spaziani and the Eagles.

A month and a half later, it’s still hard for Vardaro to fathom this relatively overnight sensation.

“It’s not so overwhelming, as much as it is shocking,’’ Vardaro said with a laugh. “I didn’t expect it at all. I mean, who doesn’t want to play D-1? But you just never think that you have the talent.’’

With an increasing number of Internet recruiting services and scouting combines focusing more attention on high school athletes, the summer months have become a crucial period for prospective college athletes. More and more, prospective Division 1 college athletes are campaigning from camp to camp, combine to combine, in an effort to get seen by coaches.

In cases like Vardaro’s, a little exposure went a long way.

But for Malden’s Andrew Tallman, entering his senior year at Boston College High, it appears to have gone even longer. Despite only appearing in the final two games of the Eagles’ Division 1 Super Bowl-winning season last fall, and even more limited exposure in his sophomore season, Tallman has offers from Virginia, Miami, Utah, Southern Methodist, and Tulane.

Why? Tallman is a 6-foot-6, 255-pound tight end/defensive end who can play on the interior, runs a 40-yard dash in 4.75 seconds, and does sprint hurdle events for the Eagles’ track-and-field squads.

But there is reason to be cautious, too.

“The early stages of all the negative things in high school recruiting for basketball - AAU, outside interests - you’re starting to see that emerge in football,’’ said John Fiore, Reading High head coach, who has two players - senior running back Valentino Perrina and junior quarterback Stan Andre - receiving Division 1 interest. “You’re starting to see people more interested in promoting themselves as opposed to promoting the best interest of the kids.’’

NCAA rules prohibit official visits and contact from college coaches until a player’s senior year. Scott McCummings, Natick High quarterback, received an offer from Connecticut last January; and he received another from Syracuse this spring.

An A student, McCummings was also waiting to hear back from the admissions departments at Harvard and Stanford. His family, he says, was insistent on seeing the campus on an official visit before making a decision. When Syracuse received commitments from two other quarterbacks, one from New York, another from Colorado, the Orange, according to McCummings, reneged on their offer.

Under NCAA rules, players may reach out to coaches, but not vice-versa, until they’re seniors, which means high school coaches often find themselves in the dual role of instructor and messenger.

Tom Lamb, Natick High head coach, suggested that a tweak on the NCAA rules is in order.

Lamb would like to see official visits and calls from coaches be permitted, starting in the spring of a player’s junior year. The prospect of having an early-signing period, similar to basketball, has also been discussed.

“We’ve got kids being offered, and being squeezed to commit, and yet the coaches can’t really even talk to them,’’ said Lamb, also the athletic director at Natick, and a former assistant coach at Northeastern.

“I think we need to make some adjustments. The recruiting calendar has changed so much. From a high school kid’s point of view, we need some help from the NCAA, change the calendar a little bit. That’s my feeling.’’

Others, like Charlie Stevenson, Xaverian Brothers coach and athletic director, feel that the recruiting period should be pushed back.

One of Stevenson’s starting defensive tackles, Medfield resident Cam Colwell, has an offer from Tulane.

“In my opinion, they’ve advanced it too much already,’’ Stevenson said. “If you’re trying to guess by a kid’s sophomore year whether they’ll be good as a freshman in college . . . granted, it’s always been a guess. But for those kids who don’t develop until their senior year, some of those guys in my opinion are overlooking some very good football players because they’re in a rush to get things done before senior year.’’

If anything, Vardaro’s quick rise on the recruiting radar is testament to that. His senior year might be very different if he hadn’t been seen on someone else’s tape, and if the coaches weren’t asking “Who is that number 50?’’

Checking in on the area's top senior football recruits:

RODMAN NOEL
EVERETT HIGH
The lanky 6-4, 190-pound safety has offers from Connecticut and Maryland in hand.

BOBBY VARDARO
PHILLIPS ANDOVER ACADEMY
The 6-foot-5, 315-pound offensive lineman from North Reading has committed to Boston College, a disappointing development for Connecticut, Syracuse, and a number of others.