Eagles given a little kick 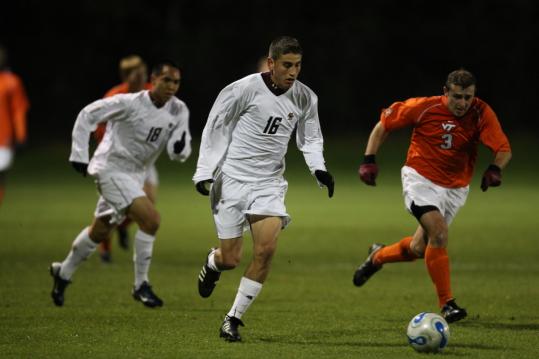 Alejandro Bedoya (16) is out front as a leader of the BC men's soccer team, top seed in the NCAA tourney. (JOHN QUACKENBOS/COURTESY BOSTON COLLEGE)
Email|Print| Text size – + By Barbara Matson Globe Staff / November 27, 2007

When the college soccer season began, junior Alejandro Bedoya had not played a minute for Boston College, but he was one of the team's biggest boosters. A sorry track record in their first two seasons in the Atlantic Coast Conference, perhaps the NCAA's most competitive soccer pitch, seemed to have tempered the Eagles' outlook. In its first year in the ACC, BC didn't win a game (0-6-2) and last year it went 3-3-2, even with ACC Offensive Player of the Year Charlie Davies leading the attack.

Then Davies left BC midyear to play professional soccer.

Bedoya was ready to make a move. A High School All-American from Weston, Fla., Bedoya had opted to go to Fairleigh Dickinson in New Jersey, where his father, Adriano, had a stellar career in the early 1980s. But after two seasons, Alejandro had just about run through the possibilities at FDU, earning a slot on the All-Northeast Conference first team each year. He wanted more. He wanted the ACC.

Bedoya looked immediately to BC. Eagles coach Ed Kelly was an assistant coach at Fairleigh Dickinson when Adriano played, and Alejandro's mother Julieta loved Boston. So Bedoya shipped up in January and got a chance to play spring soccer with the team. He liked what he saw.

So when he heard some of the players mumbling about their failures in the ACC, he spoke up.

"Maybe they were a little hung over from not doing well in the ACC," Bedoya said. "I used to hear them talking, saying, 'We're not that good.' I was one of the most optimistic.

"Maybe the others were a little reluctant to say how good they could be. I kind of took a leadership role, to tell them how good we can be. I told them I didn't come here to mess around.

"A little bit into the season, they finally realized."

So a BC squad with a captain from Ghana and another from California, a top scorer from Trinidad and another from Florida, began to find its identity. Wins began to accumulate, which only made players work harder, Bedoya said.

"It's a discipline thing," he said. "It made this team tighter when we realized we could do something."

BC (15-4-1, 7-1-0) won eight of its last nine games and claimed the ACC regular-season title, then won the ACC tournament title with a 2-1 victory over Wake Forest. The top-seeded Eagles, who had a first-round bye, open NCAA Tournament play tomorrow night at home against the University of Massachusetts (14-7-1), which edged Boston University, 2-1, in a first-round game.

Bedoya's feats at BC seem to complete a lot of journeys. The Bedoyas have been itching to get to Boston for many years. When Adriano Bedoya left Colombia to go to college in the United States, he wanted to play at BC. That connection didn't work out and he ended up at FDU, where one of his teammates was Brian Ainscough, now head coach at Northeastern, where Alejandro's brother Santiago is a freshman soccer player. That makes Julieta happy; "she was basically ecstatic when we both came to Boston," Santiago said. Marcela Bedoya, a high school junior and also a soccer player, would love to go to BC.

Moreover, in Alejandro's collegiate debut, he picked off an Eagle pass to score the winner unassisted as unranked Fairleigh Dickinson dumped No. 15 BC, 3-1, in the 2005 season opener.

Though FDU played in a less-prominent conference, Kelly continued to hear about Bedoya.

"Everywhere you'd go, people would say he was the best guy on the field," Kelly said. "He's a real gamer, a real competitor. He wants to be the best on the field every time he's out there."

Bedoya gets a lot of endorsements these days, from ACC accolades to a spot on the Hermann Trophy watch list. But the assessment of his little brother provides a more complete description.

"It was always nice to play with him," said Santiago, who was on the high school team with his brother, "because he had a lot of friends and they would all come to the games. They'd bring signs and they painted their stomachs with A-L-E-J-A-N-D-R-O and S-T.- T-H-O-M-A-S-A-Q-U-I-N-A-S; it was a great environment to play in.

"He was always kind of an underdog, so he worked really hard. He kind of broke out in his sophomore year [in high school] and it really motivated me in my soccer, to see that all his hard work paid off. He's just such a nice kid."

As for Alejandro, once more he's ready to make a move. Or two. He counts off the classes and commitments remaining before tomorrow night's game and shifts in his chair.