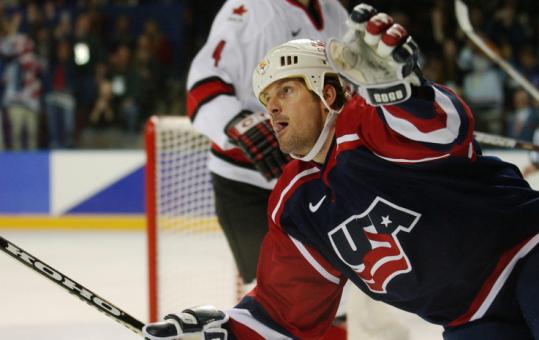 The Independent School League is one of the top prep school hockey leagues in the country, the breeding ground for future collegians and pros.

Now, the reputation of the ISL is even stronger.

Amonte, a Braintree native, graduated from Thayer in 1989. He played 17 years in the NHL. He made the NHL All-Rookie team in 1992 with the New York Rangers, played in five NHL All-Star games, and was inducted into the USA Hockey Hall of Fame in 2009.

Amonte said he wants to strengthen the hockey program at Thayer, and prep school hockey in the area, which have both been hurt by the growth of junior hockey.

“We recognize how junior hockey leagues have affected high school hockey, and we are trying to hang onto players a little longer,’’ said Amonte, who played with McEachern and Young on the 1992 US Olympic Team that finished fourth in Albertville, France. “Being a local guy will help attract kids. And hopefully parents see we’re making a commitment and want to turn things around.’’

Matt McGuirk, the school’s athletic director, said Thayer wants to reestablish itself as a hockey power.

“From the ’70s to the ’90s, Thayer had a stronghold on the South Shore. We had a saying that ‘if you played hockey and were from the South Shore, you never passed Exit 17,’’ the Route 3 exit that leads to Thayer’s campus, said McGuirk, who played hockey at Thayer and graduated in ’92. “Tony gives our program an instant shot of adrenaline.’’

“Tony is very grounded and doesn’t have the ego some probably think he has,’’ McGuirk said. “Let’s be honest, he has a ton of coaching options, so he wouldn’t be here if he didn’t want to be.’’

After Amonte retired from the NHL in 2007, he “sporadically volunteered’’ to help coach the varsity team, and last season was a coach on Thayer’s middle school hockey team. Amonte said the tradition of the ISL, the caliber of play, and giving back to his alma mater were the main attractions.

“Knowing what the school expects, what the hockey program needs, just being a part of the Thayer community helps me realize what needs to be done,’’ Amonte said.

Another challenge: getting a rink on campus. The team plays its home games at the Canton Sportsplex. Amonte said Thayer is the only ISL team without its own facility.

“Not having a rink has been a major issue. Even when I was at Thayer there was talk about building a rink,’’ said Amonte. “We need to get the project underway. It would be a great step toward building a great hockey program.’’

“There might be some growing pains this year, but I think you’ll see the fruits of winning and losing — if that’s how you define a season — in the 2011-12 season,’’ McGuirk said.

“Tony will get players to buy into the culture of the program. I remember during my days at Thayer, our success hinged upon getting kids from the South Shore. And that’s what Tony will help us reestablish.’’

Wholey leaves for college post
Paul Wholey has stepped down as the boys’ basketball coach at Pembroke High after accepting the head coaching position at Framingham State College. In three seasons at Pembroke, the Hull native compiled a 58-34 record and guided the Titans to the state tournament each season, along with the Patriot League title in 2008-09.

Morse’s best throw (212 feet 7 inches) came in his first attempt, and earned him All-America honors for the second time in three years. He will be competing at the USA Outdoor Track and Field Championships this week at Drake University.

Steve Crowe can be reached at crowe.steven@yahoo.com.