After the mud and the rain - and more mud - the 2010 Ryder Cup golf tournament finally came down to the last singles match, with Europe besting the US again on a birdie putt from Graeme McDowell on the 16th green. Europe has taken nine of the last 13 tournaments. Thanks to all that rain, the contest featured it's first Monday conclusion, with the sun finally shining on a dominant European squad at Celtic Manor in Newport, Wales. ( 22 photos total) 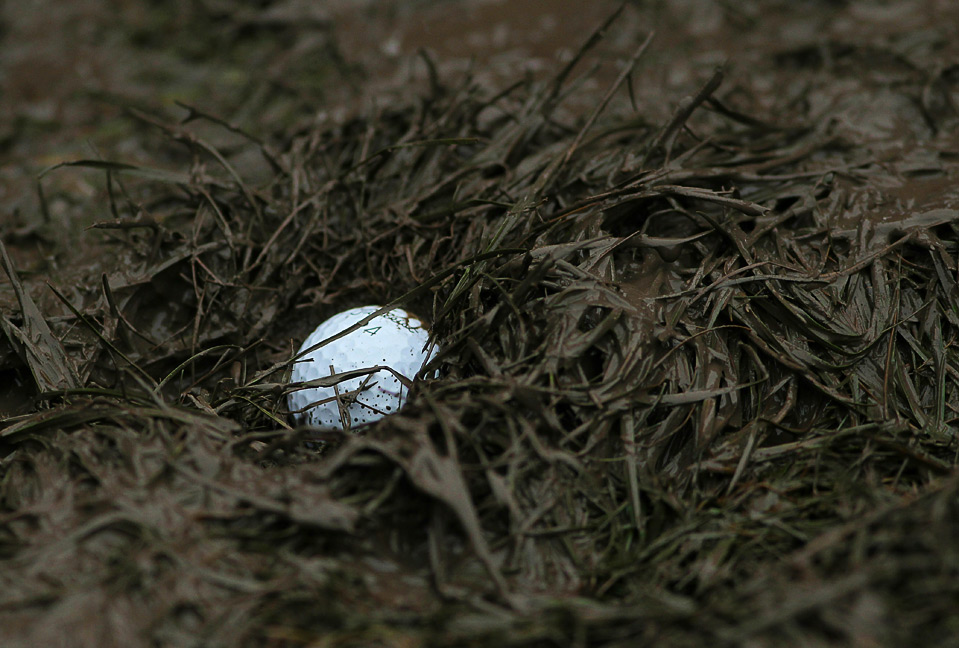 Steve Stricker's ball finds a muddy lie on the 4th hole during the morning fourball matches during the 2010 Ryder Cup at the Celtic Manor Resort October 1 in Newport, Wales. (Jamie Squire/Getty Images) 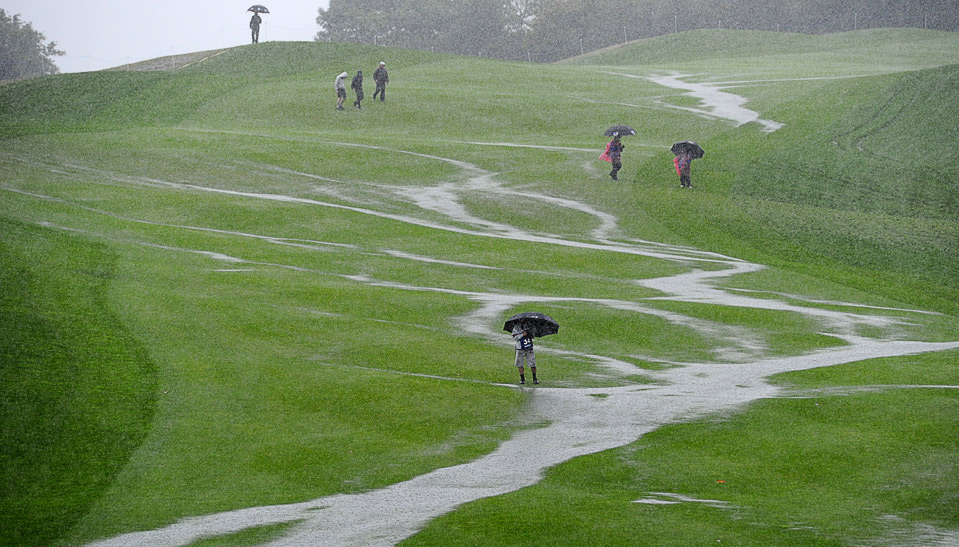 2
The 18th fairway flooded after heavy rainfall during the opening fourball round October 1. (GLYN KIRK/AFP/Getty Images) # 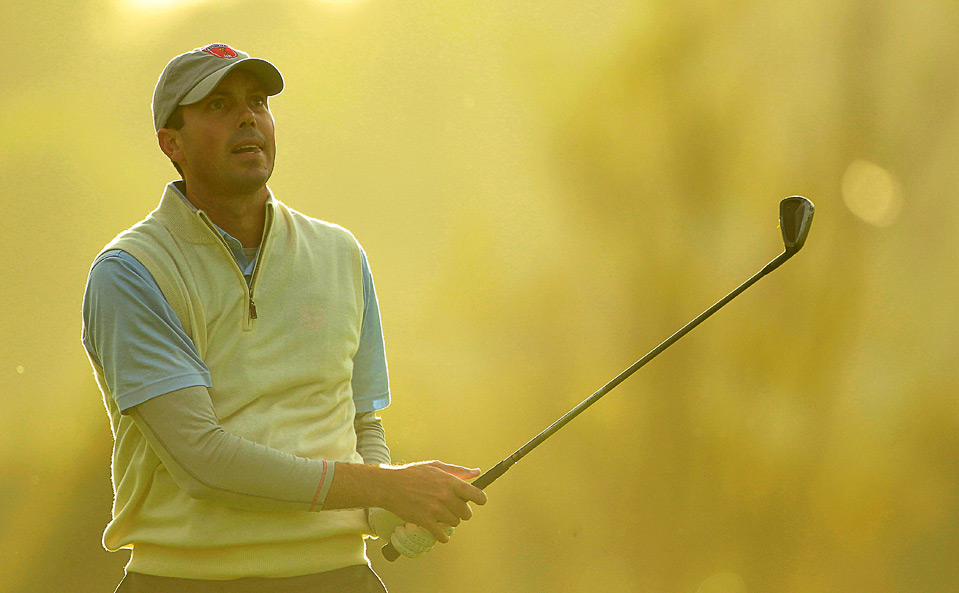 3
Matt Kuchar of the US hits an approach shot during the morning fourball matches October 1. (Andrew Redington/Getty Images) # 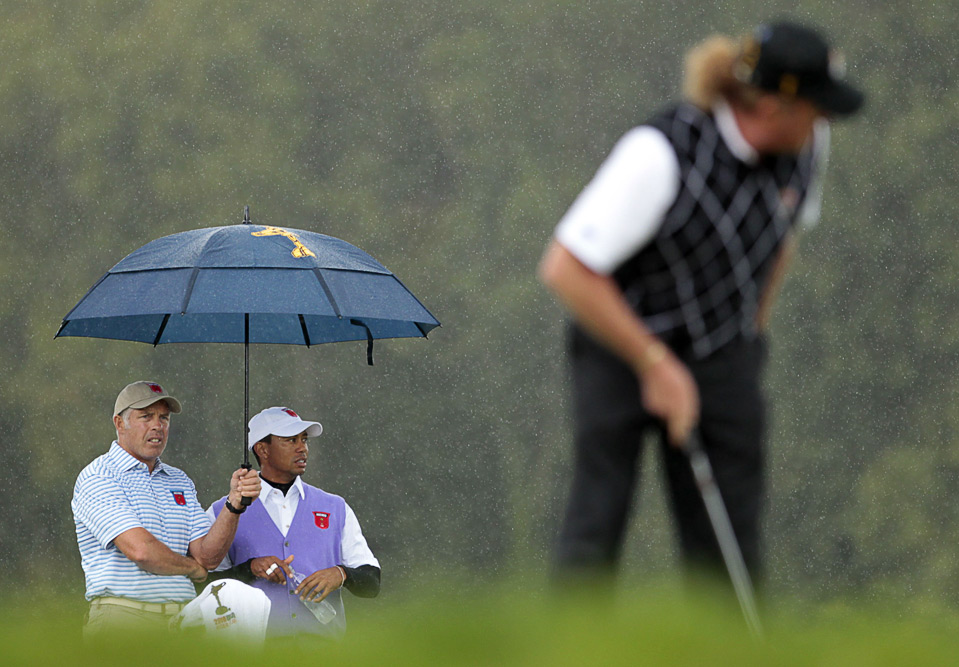 5
Tiger Woods and his caddie Steve Williams (right) shelter under an umbrella as Europe's Miguel Angel Jimenez prepares to play a putt on the 7th green during the second day October 2. (AP Photo/Matt Dunham) # 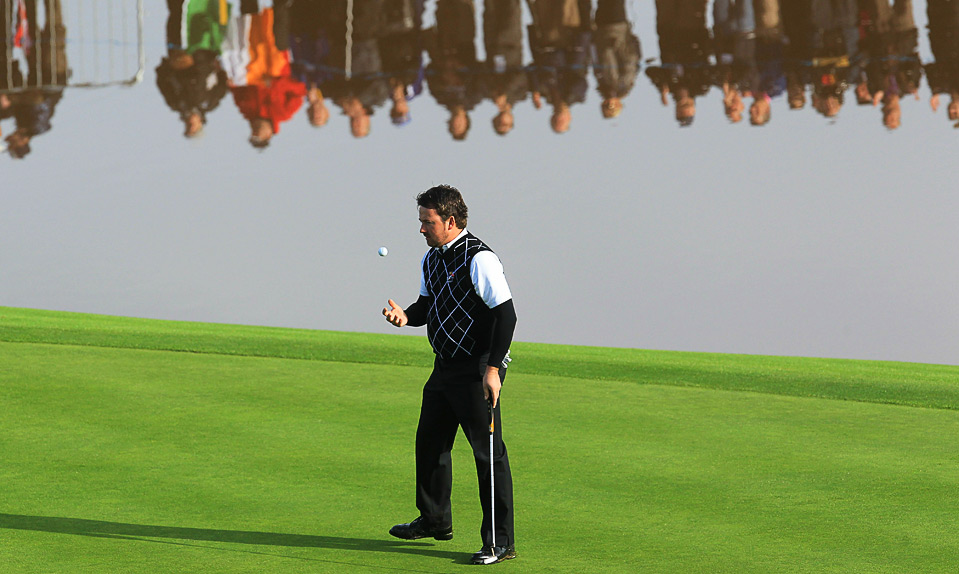 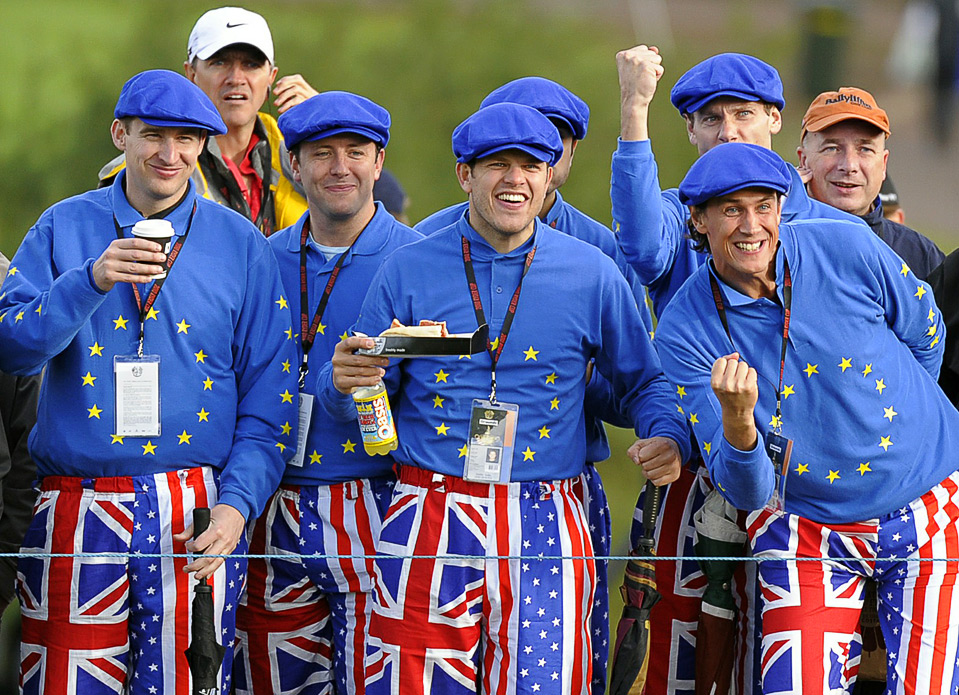 7
Golf fans cheer during the opening round of fourballs October 2. (TIMOTHY A. CLARY/AFP/Getty Images) # 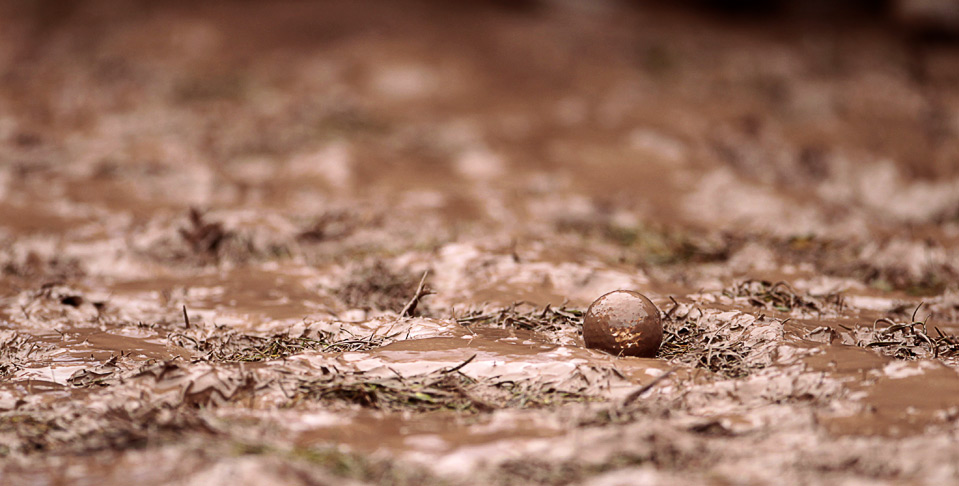 8
Tiger Woods' ball lands in the mud after his shot from the 1st tee October 2. (AP Photo/Matt Dunham) # 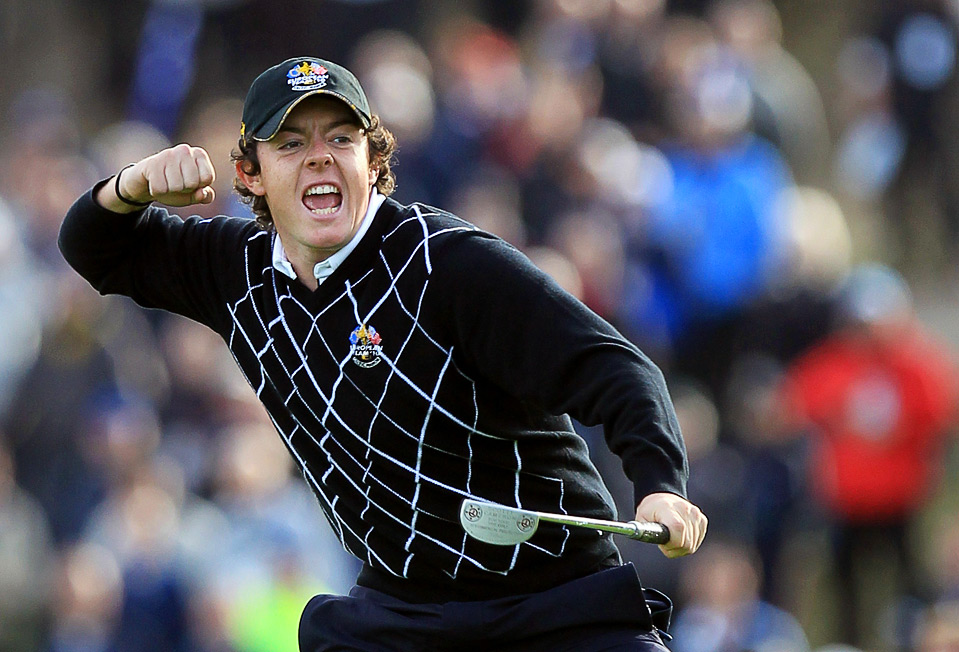 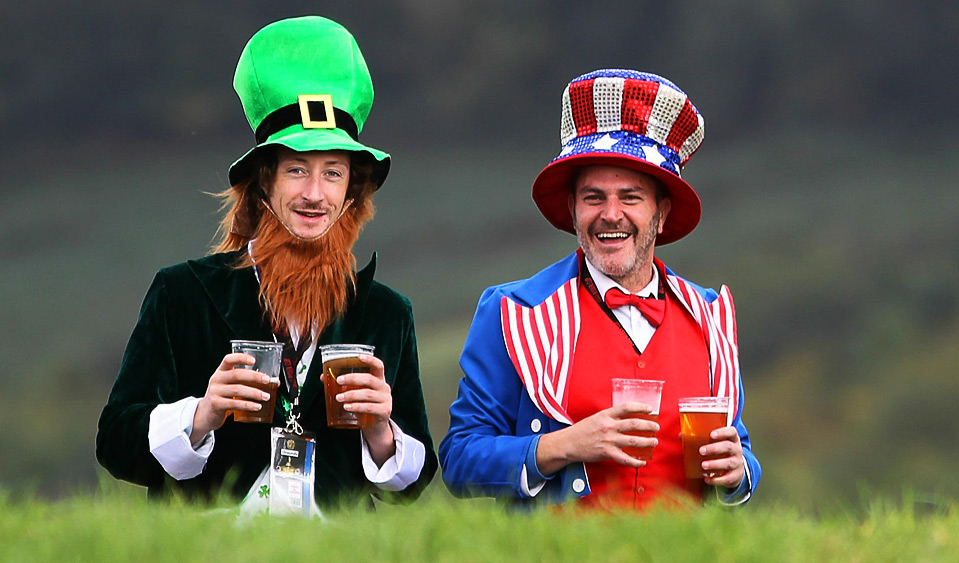 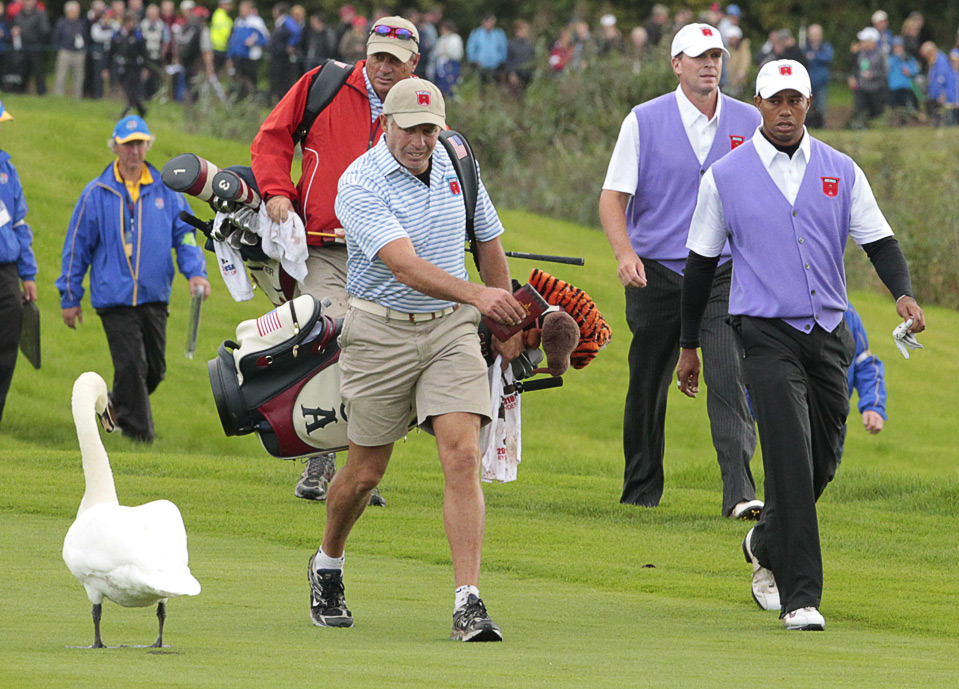 11
Tiger Woods and his caddie Steve Williams walk past a swan on the 11th fairway October 2. (AP Photo/Matt Dunham) # 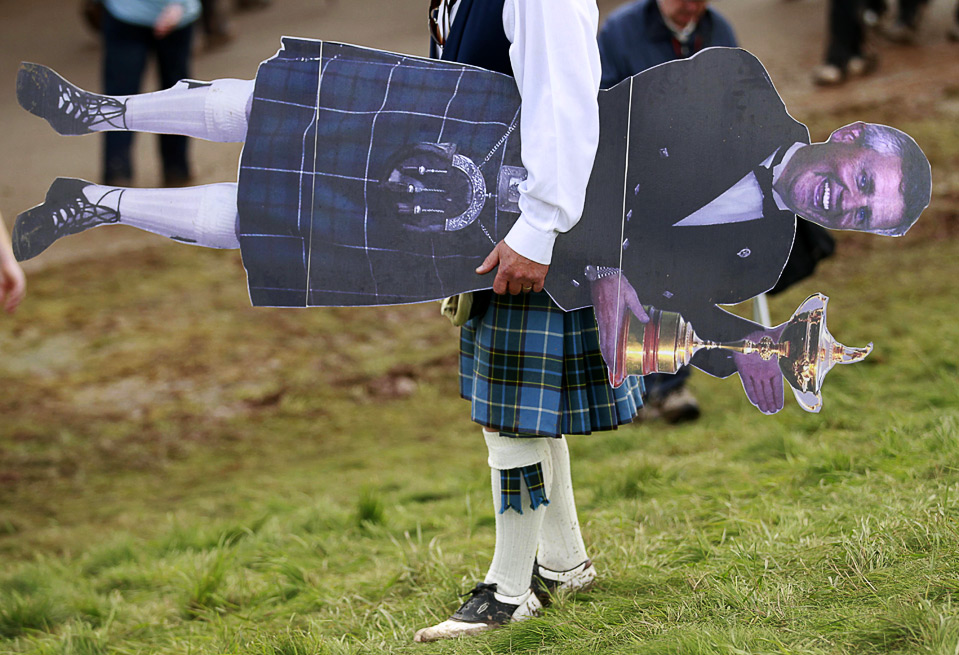 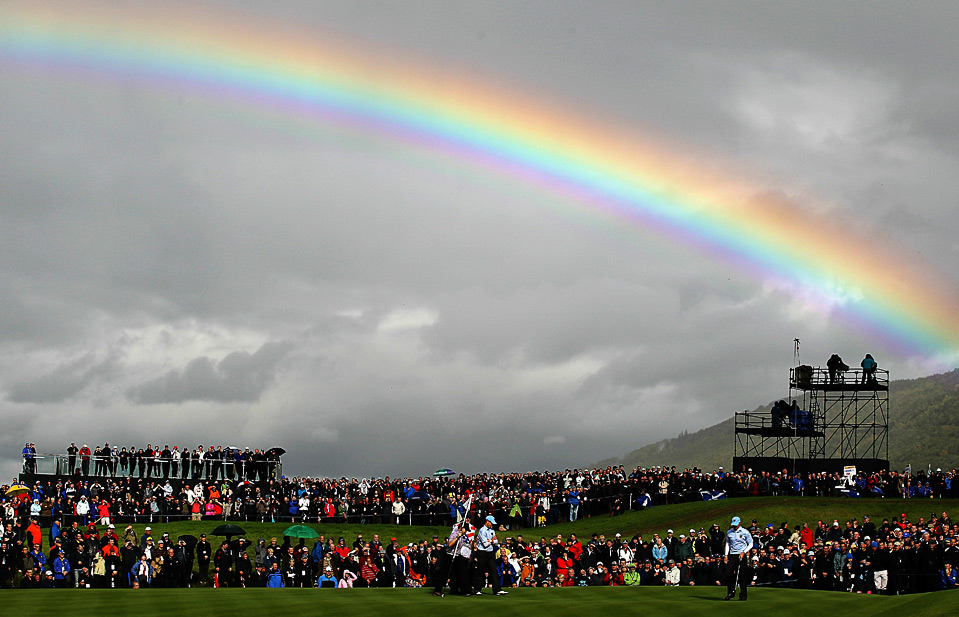 13
A rainbow arches over the course October 3. (Jamie Squire/Getty Images) # 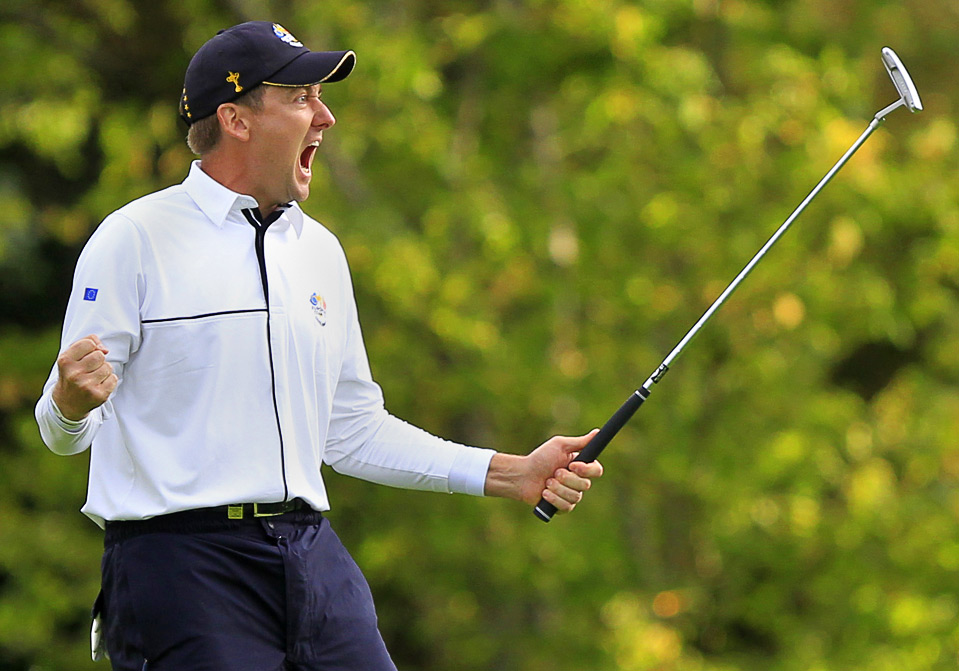 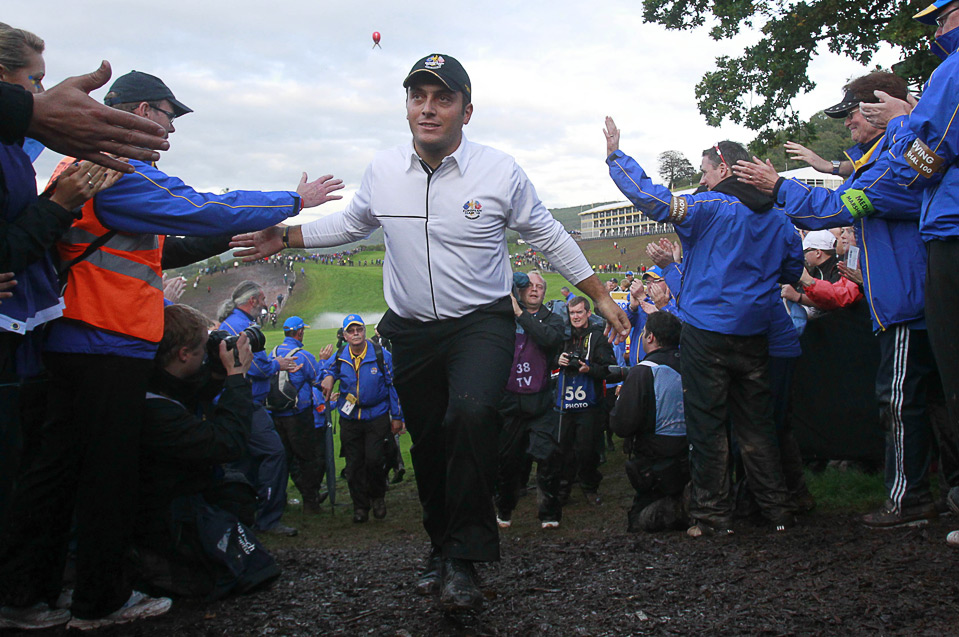 15
Europe's Francesco Molinari is congratulated by the crowd after halving his match October 3. (AP Photo/Matt Dunham) # 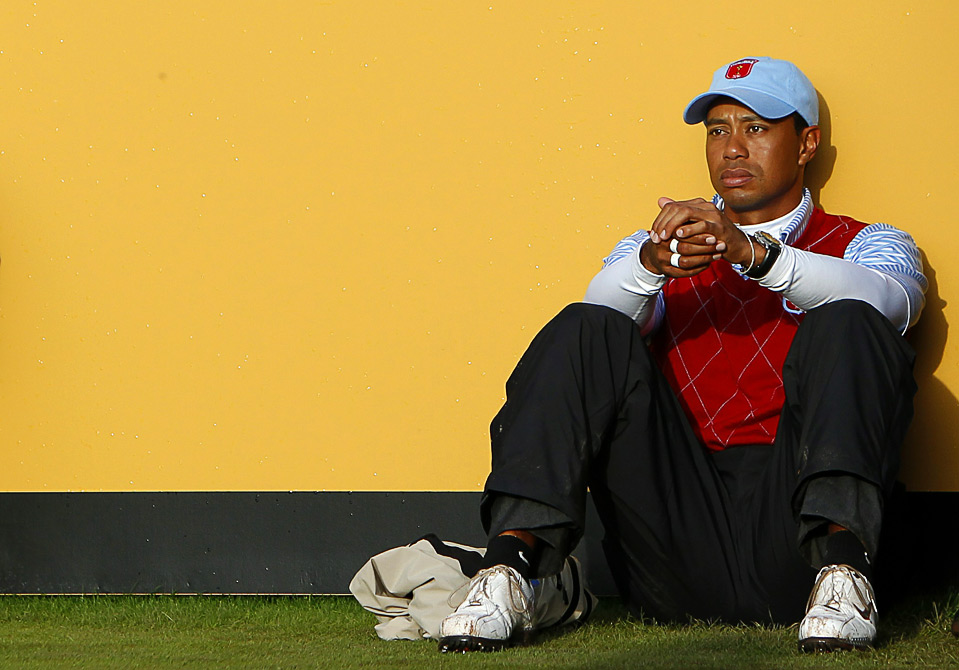 16
Tiger Woods rests on the 18th hole after losing in session three of the foursomes to Europe's Lee Westwood and Luke Donald October 3. (PETER MUHLY/AFP/Getty Images) # 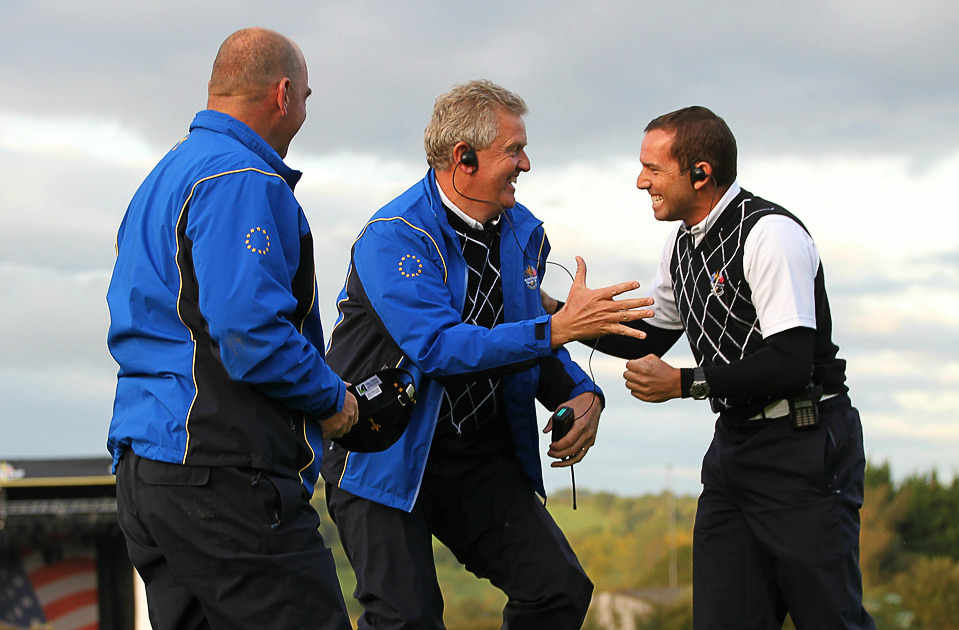 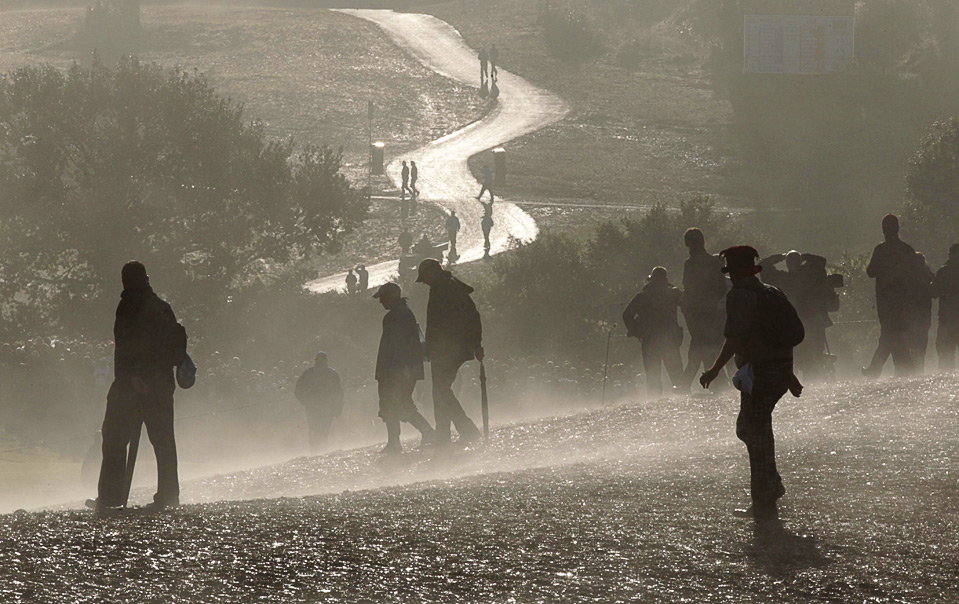 18
Spectators make their way to the course through foggy conditions on the final day of the tournament October 4. (AP Photo/Matt Dunham) # 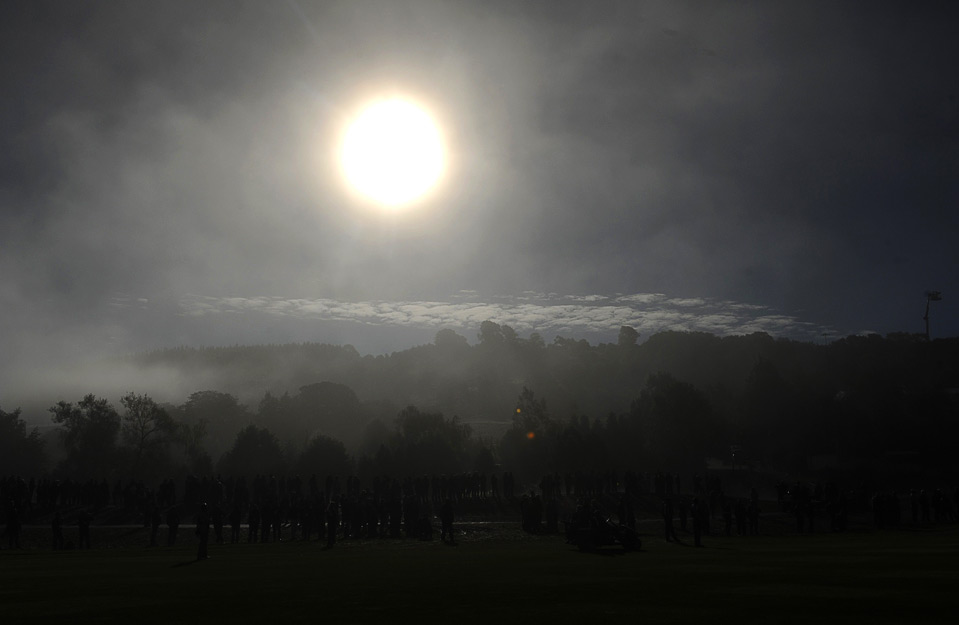 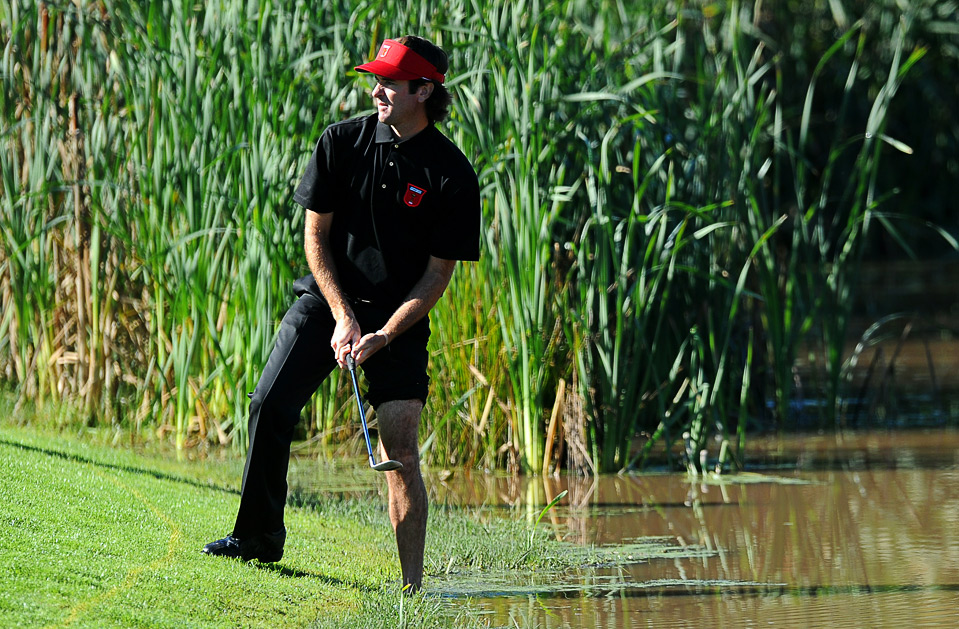 20
American Bubba Watson removes a shoe and sock as he prepares to hit out of the water on the 4th hole October 4. (ADRIAN DENNIS/AFP/Getty Images) # 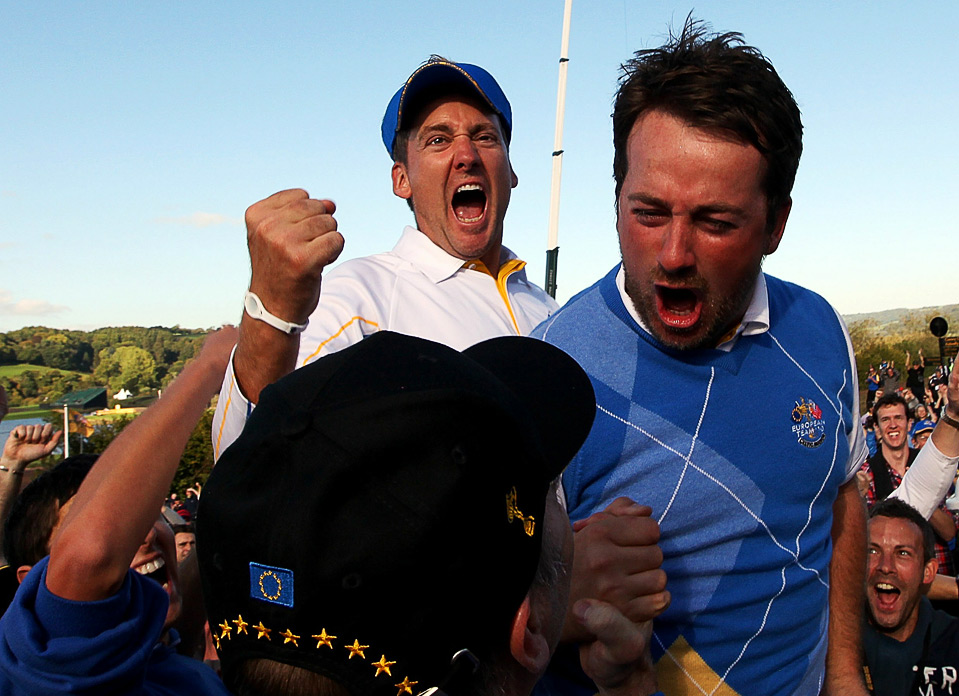 21
Graeme McDowell (right) and Ian Poulter of Europe celebrate the victory for the European team at the end of the singles matches October 4. (Jamie Squire/Getty Images) # 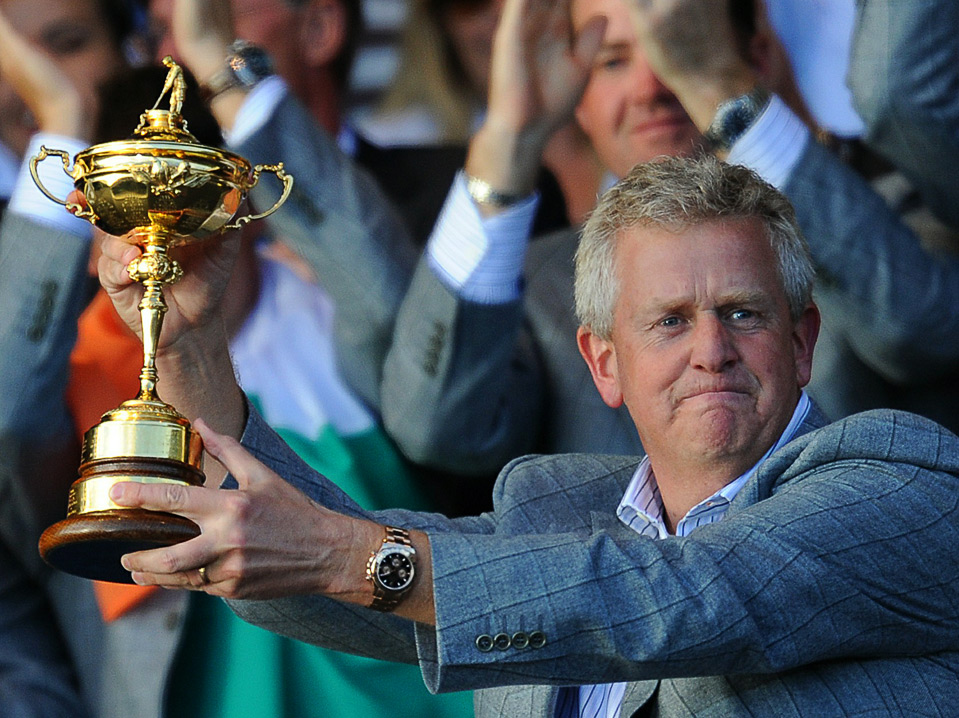 thought for sure we'd see the shot taken by Mark Pain, Daily Mail photog, of Tiger's ball coming straight at him.

Oh, and too bad the Ryder cup took the spotligtht. I was hoping my beloved Aussie Rules Football would get some shots.