Head to head: Celtics vs. Cavaliers

Bring it on, LeBron. That seems to be the confident Celtics' mind-set as they prepare to face the NBA's premier player in an Eastern Conference semifinals showdown that tips off Saturday. Both clubs dispatched their first-round foes in five games -- the Celtics wiped out the Heat Tuesday night, while Mr. James and the Cavs finished off the Bulls -- setting the stage for the teams' first postseason showdown since their memorable seven-game set in 2008.

The Celtics prevailed, as you may recall, with James (45 points) and the Celtics' Paul Pierce (41) engaging in a spectacular Game 7 duel. Several days later, the Celtics owned their 17th championship.

This season, the Celtics and Cavs have met four times, with each team winning twice. In the most recent matchup April 4, the Celtics earned a 117-113 victory at the Garden. As they get ready for the latest chapter in the franchises' relatively new rivalry, here's a position by position look at the key players on both sides. 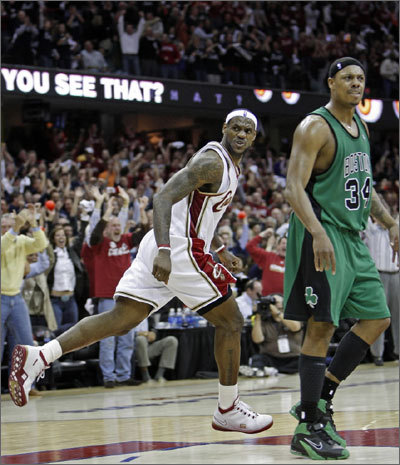