THIS STORY HAS BEEN FORMATTED FOR EASY PRINTING
Heat notebook

No answers on Rondo yet

Spoelstra has his hands full 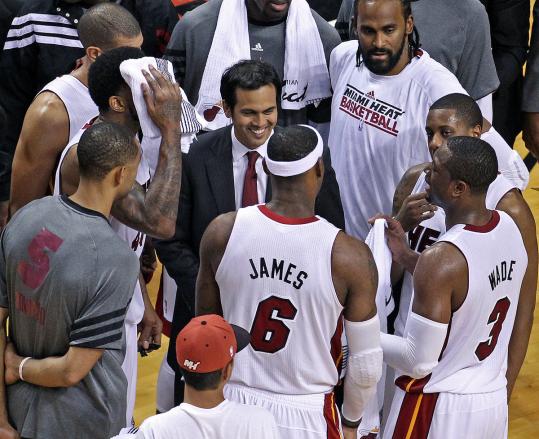 MIAMI - There were few answers from Miami coach Erik Spoelstra as he sat at the podium just 13 hours after Rajon Rondo had a playoff performance for the ages against his Heat. After watching film of Game 2, Spoelstra was asked how to counter Rondo and he responded, “I’m not sure yet.

“Trying to step back and be objective about it after a sensational performance by a great player. You have to take a step back, you have to watch the film a couple times and try to look at it objectively. It’s a dangerous thing.

“He’s most dangerous when he’s getting into the paint, getting to the rim, and obviously getting other people involved. But you also don’t want to just give him free-throw-line warmup jump shots.

“So it’s a balance we’re going to have to figure out. I don’t have the answer for that right now.’’

Though Spoelstra put LeBron James and Dwyane Wade on Rondo at times in Game 2, more of that doesn’t appear to be in the works. Spoelstra and the Heat still have to worry about Paul Pierce, Kevin Garnett, and Ray Allen.

“They also have a handful of other Hall of Famers that we have to deal with as well, and LeBron and Dwyane have to defend those guys.’’

So Spoelstra was back to the video, trying to unlock the secret to defending a player who can confound opponents with multiple attacking styles. In Game 3, Rondo could just as easily go back to dishing the ball and his jump shot might vanish.

As Wade said after Game 2, “We tried to keep mixing it up on him. I thought we did a good job making adjustments.’’

“He was sensational,’’ said Spoelstra, who has used different adjectives in every press conference to describe Rondo. “Some things we were able to do that we like that didn’t necessarily slow him down.

“But he’s that dynamic of a player, he’s that gifted, that it’s going to require the respect of multiple defenders and multiple coverages, and we were doing that throughout the game. He was making terrific reads.’’

Questions continue to surround the officiating in this series, after Miami shot 47 free throws in Game 2 to Boston’s 29. There was one particularly notable non-call when Wade hit Rondo in the face in overtime.

Asked if it gets frustrating when teams harp on the disparity, Spoelstra said, “We don’t buy into any of that. That’s normal playoff talk.

“That’s who we’ve been all year long. And what we’ve been trying to hammer and hold each other accountable to is that’s our identity, and when we get away from that identity, it hasn’t been a successful formula.’’

The coach said the Heat have to continue to attack. That’s what they do. The plan is to get to the rim, and if that results in trips to the line, they’ll take that.

This season, Miami was second in the NBA in free throw attempts per game, at 29.5, behind only Memphis.

It’s possible that the free throw discrepancy, and the questions about the officiating, will change once the Heat get to Boston for Game 3, but it’s something Spoelstra said his team can’t be distracted by.

Of course, once at the line, they have to make those free throws.

“We worked on it,’’ said Spoelstra, who attributed some of the misses down the stretch to fatigue after making such physical plays to get to the line.

“I don’t think it’s something we’re going to overemphasize. I like the fact that we’re getting to the line, that’s the important thing.’’

Most of the Heat players came to AmericanAirlines Arena Thursday, according to Spoelstra, either to shoot or do other work on the court. Included in that group was Chris Bosh, who participated in his third straight workout. Spoelstra called it a “rehab/basketball’’ workout, and said Bosh (lower abdominal strain) would travel to Boston so the Heat can continue to work with him. As for his return? “It’s too early to tell now,’’ Spoelstra said. “I think we’re all encouraged that he’s actually about to do some work.’’ . . . Even though Joel Anthony started at center in the second half of Game 2, Spoelstra didn’t anticipate a change in the starting lineup. Ronny Turiaf is currently the starter.