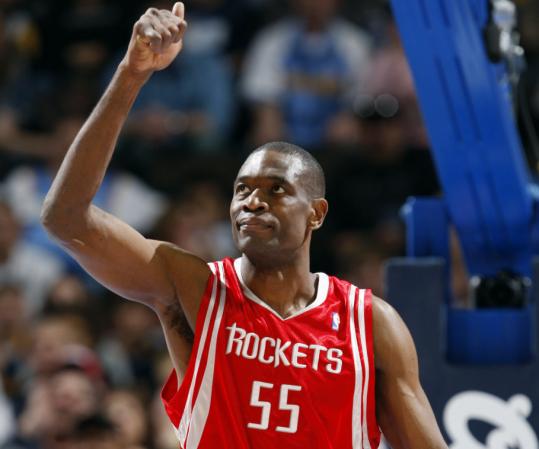 Dikembe Mutombo would have liked to play in Boston but he said the Celtics never made him an offer. So the veteran big man re-signed with the Rockets. (File/David Zalubowski/Associated Press)
By Marc J. Spears January 4, 2009
Text size – +

While Dikembe Mutombo said he wanted to come to Boston, the Celtics weren't quite ready to commit to him.

The four-time Defensive Player of the Year listed the Celtics among the teams he was interested in signing with for his last NBA season. While the Celtics had mild interest, they expected Mutombo to re-sign with Houston all along, and he did.

Mutombo told the Globe last Thursday that the Celtics didn't make an offer because they are still weighing their big man options.

"I wanted to play about 40-something games," said Mutombo. "The only money that was on the table for me was San Antonio and Houston. Yao Ming talked to me about coming back.

"Boston talked to me about being interested, but never made an offer. I believe they also had interest in P.J. Brown, Alonzo Mourning, and Joe Smith, who might be released by Oklahoma City.

"I wasn't going to sit at home for days to pass by while they make a decision. It left me to decide to go to San Antonio or come back here [to Houston].

"Boston wasn't ready. I think they will want to do something at the end of January. I think they're interested in four guys and then will pick one."

With Mutombo signed and Brown telling the New Orleans Times-Picayune last week that he plans on staying retired, the only free agents left that could intrigue the Celtics are Mourning and Robert Horry. Horry, however, doesn't seem interested in playing again.

Since Brown's departure, the Celtics have been in need of a veteran big man who can add length off the bench. Leon Powe and Glen Davis are both talented but undersized.

The 7-foot-2-inch, 260-pound Mutombo averaged 3 points and 5.1 rebounds in 39 games for Houston last season, and the Celtics seemed concerned about what he could contribute.

"I wanted to come," said Mutombo, who will be in town Wednesday with the Rockets. "My question was, how long would it be till they make a decision? They didn't have an answer."

The Celtics may not have an answer for a while.

Despite their recent losses, the sky hasn't fallen. The Celtics won't make a kneejerk move to add a veteran big man or a veteran guard with scoring skills off the bench. As they did with Brown and Sam Cassell late last season, expect them to take their time to make sure they get the right piece to their puzzle.

One NBA source said the Celtics seem interested only in players that are free agents or are bought out. But stay tuned. Don't be surprised if Celtics president Danny Ainge has something up his sleeve.

As Mutombo said, the Celtics are still trying to find out exactly what they want to do. Championship teams with elite records can take their time.

"I like our team," Ainge said. "Nothing at all is going on right now."

For Rivers, it's all about the Gators

Celtics coach Doc Rivers, whose home is in Florida, has a growing relationship with the University of Florida's football team and coach Urban Meyer. Rivers spoke to the team during the offseason, often communicates with Meyer via e-mail, and tries to use football to motivate the Celtics at times.

Rivers, whose daughter plays on the Florida volleyball team, is rooting for the Gators to beat Oklahoma in the BCS Championship Game Thursday.

"[Basketball coach] Billy [ Donovan] I know," said Rivers. "But really, with Urban it's been really good. I spent some time with him this summer. We created a video during the playoffs that has been one of their themes this year. 'Keep punching,' the whole Muhammad Ali thing.

"It's funny. When I went to the first game, they actually had it up on the screen at the stadium - not the same one, but that theme.

"He had me come in and speak to the team. They had a 'Champions Day' every year and I spoke to the team. It was neat.

"I love football because of the execution. Football, you have to have precise execution every day down the field. If I say, 'In and out,' and you go the other way, it's a turnover. If I say, 'On three,' and you go on two, the whole team is penalized.

"I tried to get these guys to understand if we can get that same mentality in basketball, we could be the best-executing team in the world on defense and offense."

Rivers was asked to speak to the Gators again before the BCS Championship, but time didn't permit it. He plans on watching the game while the Celtics are in Cleveland, where they play the Cavaliers Friday.

Asked for a prediction, Rivers said, "Florida. All SEC."

Joe? It probably ain't so
Unless the Celtics can work out some trade magic, don't expect to see Joe Smith in a Boston uniform. While the Celtics would likely be interested in signing the veteran power forward, an NBA source said Oklahoma City has no interest in buying him out of his $4.7 million contract. Because the Celtics have three players with max contracts, it would be extremely difficult to make a trade for Smith. The reason teams are interested in adding the 6-foot-10-inch, 225-pounder is the same reason the struggling Thunder wouldn't be interested in buying him out. Smith has a solid inside and outside offensive game, is a decent defender, is very professional, and has 14 years of experience. Even so, don't be surprised if teams make a run at the likes of Oklahoma City players such as Smith, guard Earl Watson, forward Damien Wilkins, and big men Nick Collison and Chris Wilcox via trade.
Showtime for Showcase
There is more than one reason why the NBA Development League's premier event is called the "Showcase." The annual Showcase is Tuesday through Thursday, with 16 teams playing two games each in Orem, Utah. There have been 67 credentials issued for NBA executives and scouts from every team, including one for Celtics president Danny Ainge. Six players have been assigned to the D-League from NBA teams since Christmas. Nine members of the 2008 NBA Draft class will be taking part, including Celtics rookies J.R. Giddens and Bill Walker of the Utah Flash, as well as seven members of the 2007 class, including Nets forward Sean Williams (Colorado) of Boston College. Forty-one players with NBA experience are expected to play, including Kedrick Brown, Mateen Cleaves, Frank Williams, Blake Ahearn, Derrick Dial, Eddie Gill, and Coby Karl. Patrick Ewing Jr. (Reno), son of the Hall of Famer, and ex-University of Massachusetts star Gary Forbes (Sioux Falls) will also be participating. All 16 games will be streamed on NBA.com. Celtics fans can watch Giddens and Walker as the Flash play Tuesday against Anaheim and Thursday against Los Angeles at 9:15 p.m.
Northwest territory
With the Seattle SuperSonics now extinct, the Portland Trail Blazers are quietly becoming the NBA's Team of the Northwest. Their 55-game cable package is being broadcast in Seattle for the first time this season. Getting Seattle basketball fans to make the trek to Portland might be a little trickier, though, since it is a three-hour drive. But the Blazers have several Seattle ties that add to the attraction. Team owner and co-founder Paul Allen is a Seattle native and owner of the Seattle Seahawks and MLS Seattle Sounders FC. Allen is considering bringing co-branded Blazers-Seahawks-Sounders sports camps to Seattle. Portland coach Nate McMillan is an ex-Sonics star and guards Brandon Roy and Martell Webster are Seattle natives. "We had a little bit of that conversation at the beginning of the [season]," McMillan said about Seattle. "Our focus has been on us. I feel that if we do what we've been doing here, which is change everything about the organization, which we've done, and if we start to play good basketball and win some games, we are not just trying to capture the Northwest, we'll capture the country. That's our approach." Meanwhile, the News Tribune (a Tacoma, Wash., newspaper) reported last week that the city of Seattle is seeking $75 million to complete a $300 million finance package to remodel Key Arena in hopes of attracting another NBA team.
Free throws
Asked when Stephon Marbury was expected to get bought out of his contract, one NBA general manager said, "Who knows? It wouldn't surprise me if he didn't get bought out at all." . . . Asked about the possibility of him and teammate Caron Butler returning to the All-Star Game despite the Wizards' poor record, Antawn Jamison said, "The numbers are right, but you still got the team performance. It just depends on the situation. Joe [ Johnson] made it with a bad record [in Atlanta]. You got some guys playing well. [Danny] Granger is playing pretty well in Indiana. It will be tough, but that's the least of our problems."