It all stops with mastermind Thibodeau 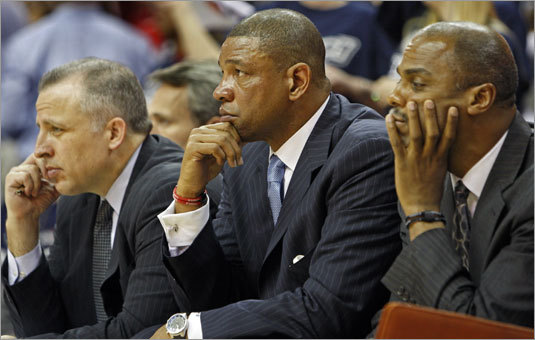 WALTHAM - When Kevin Garnett was recognized as the NBA's Defensive Player of the Year, Celtics coach Doc Rivers commented that Garnett had changed the team's culture when it came to defense. The same can be said of Tom Thibodeau.

The first-year assistant coach and former Salem State player is the Celtics' defensive coordinator and the man charged with molding a plan that will help them slow down league MVP Kobe Bryant and the Lakers in the NBA Finals.

Rivers hired Thibodeau last summer as associate head coach and promptly turned over control of the defense to the longtime NBA assistant. And Thibodeau transformed the Celtics into the best defensive team in the league.

"Thib has been the best thing that happened to us," said center Kendrick Perkins.

You might be asking exactly who Thibodeau is. He's easy to find during games. He would be the animated assistant standing next to Rivers when the Celtics are on defense, feverishly barking out instructions and pointing out switches. Thibodeau's feet are often moving along with those of his players. He does everything but get out on the court and deny the passing lanes.

"Coach is real animated. He's real emotional. He's real energetic," said Garnett. "That's what type of defense we try to go out and have. It's an energetic, consistent defense. It's a talkative defense, and when you see him on the side, those are the things that he's put in for us to try to go and carry over to the court."

Thibodeau, who spent the previous four seasons in Houston as an assistant to Jeff Van Gundy, is not vocal with the media. Rivers has a one-voice rule, silencing his assistants. But Thibodeau's track record speaks for itself. In his 18 seasons as an NBA assistant, his teams have finished in the top 10 in team defense 15 times.

"I can do what I want defensively. I can relay it to Tom, and then I don't have to worry about it," said Rivers. "It's very much like a football system in some ways. There are certain things that I want on defense, and he knows what they are. I don't have to waste my voice and my time every second."

As with Garnett, the Celtics were initially rebuffed by Thibodeau. He first agreed to take a job with the Washington Wizards last July before backing out. In late August, he signed on with the Celtics. Van Gundy, his former boss in Houston and for five seasons with the New York Knicks, thought Boston was the best fit all along.

"I give Washington a lot of credit," said Van Gundy. "I give Tom credit - instead of sticking with a mistake, he did it the right way. Doc hired him. It's worked out great for Tom, great for Doc, and great for the Celtics."

Thibodeau doesn't just demand maximum effort from players. He practices what he preaches. There are movie critics who don't watch as much film as he does.

"You talk about a guy that flies in from a series at 3 in the morning and he's back here at 7 a.m.," said Paul Pierce. "He's one of the hardest-working assistant coaches that I've ever been around."

It's always been that way for Thibodeau. The New Britain, Conn., native began his coaching career in 1981 as an assistant at Salem State. In 1984, he became head coach at his alma mater. After one season, he took an assistant's job at Harvard, spending four years on the bench there before the NBA came calling in 1989. Thibodeau became an assistant for the expansion Minnesota Timberwolves, whose first head coach was Bill Musselman.

However, Van Gundy said labeling Thibodeau, who also served as an assistant coach in San Antonio and Philadelphia, as strictly a defensive guru is selling him short. He said when Thibodeau worked for him, his greatest contributions came on offense and in individual work with players such as Rockets center Yao Ming.

"You want to hire people as assistants who are better than you," said Van Gundy. "He's better."

Van Gundy said Thibodeau's greatest gift - and the most promising indicator he'll be a successful head coach - is his ability to convince players to do things his way, which isn't always easy in a league full of multimillionaires.

Pierce said that's the difference from past Celtic teams.

"He gave us a system to believe in," said Pierce. "From Day One, he said, 'This is how we're going to guard.' And once you put in a system, if you get all the guys to believe in it and trust in it, it means everything.

"Whereas in the past when we got young players and we put a system in, we didn't always get it, we trusted in Tom's system from Day One and we all committed to him."

Rivers went on record as saying Thibodeau deserves to be a head coach, but Thibodeau's timing isn't great.

With the Celtics making a run deep into the playoffs, teams have seemed disinclined to wait for him to finish his season. With few openings - Phoenix, Chicago, and Detroit have vacancies, although the Bulls and Pistons are thought to already have deals in place with their preferred candidates - Thibodeau might have to wait a little longer.

Van Gundy said Thibodeau should have already gotten a shot. It shouldn't have taken a sublime season with the Celtics to earn him acclaim.

"I think he's gotten a lot of credit this year because of how good the team is," said Van Gundy. "That overlooks his body of work.