Shot-blocker is down after deal to Clippers 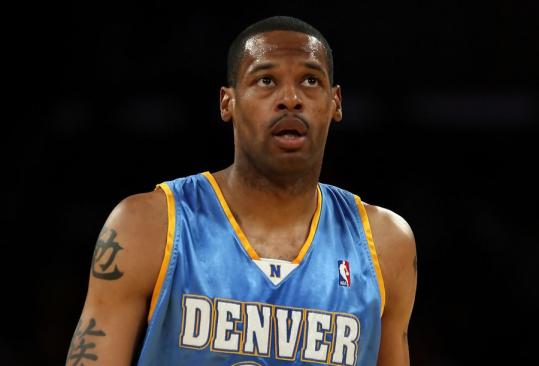 Former University of Massachusetts star Marcus Camby is hoping for a brighter day after he was surprisingly sent to the Los Angeles Clippers last week.

A year ago, Camby dealt with the birth of daughter Maya three months premature. Camby then played well for a disappointing and highly compensated Nuggets team that was eliminated in the first round of the playoffs for the fourth straight season. The Hartford native recently learned about a "real-life family issue" back home that has caused great stress. And after playing the past six seasons in a city he had grown to love, he was surprisingly dealt.

"With everything I've been dealing with off the court, this is the lowest point of my life," said Camby. The 2006-07 NBA Defensive Player of the Year has led the league in blocked shots each of the last three seasons and departs as the No. 2 shot-blocker in Nuggets history.

"I was there for the lows and the highs," said Camby, who averaged a career-high 13.1 rebounds to go with 9.1 points and 3.6 blocks last season. "I thought the fans appreciated what I did."

But after being swept by the Lakers and with team payroll and the luxury tax combining to nearly $100 million, the Nuggets needed to make a major change. Owner Stan Kroenke loves Carmelo Anthony and won't trade him, and fellow All-Star Allen Iverson's salary of $20.8 million for next season makes him virtually untradeable. And considering the injury issues of Kenyon Martin and Nene, a productive and healthy Camby was the most tradeable Nugget.

For Camby, Denver received the option to exchange second-round picks with the Clippers in 2010 and a $10 million trade exception, and could possibly save more than $20 million next season.

"I'm the only one they traded, so they are putting the onus and the blame on me," Camby said. "I was supposedly the one with all the injuries. But I held the fort down. I played hurt, played in games I shouldn't have played in. But I held my own and this is how I'm repaid?"

Camby was also disappointed to get no indication of a potential trade when he worked out with the Nuggets' summer league team in Las Vegas a week ago. New Jersey also had interest in Camby and could have brought him close to home.

"Nobody said a word," said the 34-year-old Camby. "They could have saved me a trip to Vegas. That was one of the things that really irked me. No one said anything about the [family] situation I was going through, either."

Nuggets vice president of player personnel Rex Chapman understood Camby's disappointment, and said the center wasn't being made a scapegoat.

"It's a tough situation any time a player gets traded," Chapman said. "I hope as time goes by Marcus understands. He's smart. He's mature. I know it's raw and fresh. He's hurt."

But with Camby's love for Denver, his contributions to the Nuggets, and his family situation in Hartford in mind, being traded to Los Angeles came at a bad time.

"I'm a straight East Coast guy," Camby said. "I have some family [in Los Angeles], my mom's brother and his kids. They're ecstatic. I wasn't feeling their joy. But I'm trying to make the best of the situation.

"It's nothing to do with the Clippers. [Coach] Mike [Dunleavy] was great on the phone. It's not where I'm going. It's where I'm coming from. It was home. My [eldest] daughter was about to start the first grade. There is also my family situation in Hartford. We have to find a new doctor for [my youngest] daughter. It puts me out of my comfort zone."

"It's a matter of fine-tuning in terms of physical conditioning and to get everything implemented," Colangelo said. "The good thing is they don't have to start from scratch. We've had 18 players on the two teams the last two summers. We want to get core players together. Six went both years. That shouldn't be an issue."

"We want to have some competition during the camp and it's putting some of the young players in the pipeline with USA Basketball," Colangelo said.

"This is like three years of preparation and now we're here in the homestretch," Colangelo said. "It's exciting. I think everybody is really anticipating what is about to unfold. It's been an exciting time."

Speak up
"The power couple is also responsible for inspiring so many other couples, including celebrity couples, to marry more than once. We are so happy to see so many people now choosing to marry multiple times, or renew their vows privately and publicly."
Ex-NBA player Doug Christie, who with wife Jackie, the self-proclaimed "power couple," were married for the 13th time July 8 in Seattle.

By the numbers101
Number of career 3-pointers Celtics forward Paul Pierce has made in the postseason, a franchise record.

Etc.
View from the top: You can watch the Celtics win the ESPY Award for best team tonight at 9 on ESPN. The show was taped Wednesday in Los Angeles, with the award presented by singer Fergie. Ray Allen and Paul Pierce spoke on behalf of the Celtics, and the only players not present from the championship team were Tony Allen and Scot Pollard.

"We got another great win in LA," said Ray Allen, who got a mixed reaction from the crowd for that remark.

Start of something good?: An NBA source has said that James Posey will get starter's minutes with the Hornets next season after playing 24.6 minutes per game off the bench with the Celtics in 2007-08. But will Posey, who accepted a four-year, $25 million offer from New Orleans last week, get those minutes as a true starter? He will not start over sharp-shooting small forward Peja Stojakovic, but could compete with Morris Peterson for the starting shooting guard position. Peterson averaged a career-low 8 points per game last season.

"Whatever [coach Byron Scott] wants," Posey said. "I'm always about doing the team thing, playing whatever role. I don't know [if I'll start]. I'm just going to go there, work hard, and let it work out on the floor."

Wish list: Posey is gone to New Orleans, P.J. Brown is expected to retire, and Pollard isn't likely to return, but an NBA source said the Celtics are still strongly interested in signing two of their free agents, guards Eddie House and Tony Allen. The source, however, said House and Allen are receiving interest from other teams, and are seeking three-year deals.