Slugger set for an MRI on Tuesday 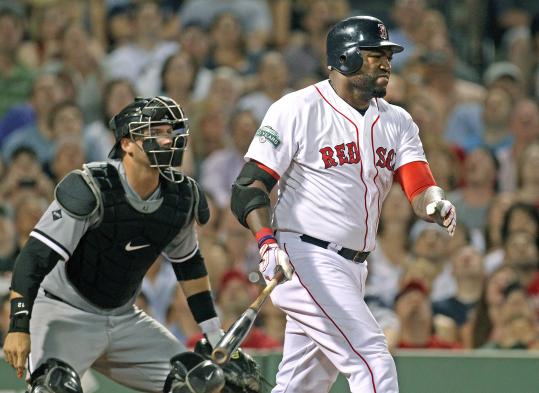 The early prognosis is Ortiz will be OK, but he may have to sit out a few days.

Ortiz iced the Achilles’ after the Red Sox’ 5-1 win over the White Sox at Fenway Park and seemed to be walking better on his way out of the clubhouse than when he was trying to round third and head for home ahead of Gonzalez.

This is the latest bizarre injury scenario for this team.

The Red Sox have lost 21 players to the disabled list this season, but one of them has not been Ortiz, who has been Boston’s best hitter this season. Ortiz is hitting .316 with 23 homers and 58 RBIs.

“He’s a little upset and a little sore,” manager Bobby Valentine said. “But it doesn’t look like he pulled anything or tore anything. Probably going to be some days though. It’s that Achilles’. He’s had the heel problem [2010] and where the Achilles’ attaches in the back of the heel. I guess he’s had it in the past.

“He did it just as he turned second,” Valentine said. “He wasn’t sure if it was going to get out, so he was going to score. Then it went out. He went to slow down.”

Ortiz, however, called his past problems a heel injury, not an Achilles’ injury. If he misses any time, the Sox may utilize Carl Crawford and/or Jacoby Ellsbury in the DH spot, or they could use Daniel Nava.

James went on the radio over the weekend and defended Paterno after a report that said he should have done more to prevent assistant coach Jerry Sandusky from sexually abusing boys.

The team issued a statement that said, “This afternoon, Red Sox Principal Owner John Henry and Executive Vice President/General Manager Ben Cherington spoke to Bill James regarding him making public his personal opinions on Joe Paterno. In that call, Mr. James was informed that his comments in no way reflect the opinions or positions of the Red Sox; and, because he is perceived as a representative of the Red Sox, he was asked to refrain from any further public comments on this matter.”

James said on the Doug Gottlieb program on ESPN Radio that he had read the 267-page Freeh report, which concluded that Paterno, Penn State president Graham Spanier, athletic director Tim Curley, and vice president Gary Schultz “failed to protect against a child sexual predator harming children for over a decade.”

James didn’t agree that Paterno should have done more to bring Sandusky to justice and argued that it should have been done by Penn State assistant Mike McQueary, who said he witnessed Sandusky assaulting a boy in the shower.

“It’s very hard, in fact it’s impossible, to explain why Paterno should have been the person to go to the police,” James said to Gottlieb. “Paterno didn’t see anything. Paterno was not the reporting authority. Sandusky did not work for Paterno. Paterno had no supervisory authority over Sandusky. It’s extremely difficult to explain why it was Paterno’s responsibility to go to the police. He knew less about it than anyone else there.”

Gottlieb countered that Paterno was the most powerful man at Penn State, and that he should have led the charge against Sundusky.

“Absolutely false,” James said. “You’re saying everything revolves around him. It’s total nonsense. [Paterno] had very few allies. He was isolated and he was not nearly as powerful as people imagine him to have been.

“They kept it quiet because they had no idea what was happening . . . they just thought they were dealing with a little misunderstanding.”

ESPN’s Buster Olney reported the Red Sox are in serious talks with the Cubs about veteran righty Ryan Dempster.

Another interesting name is Zack Greinke, the Brewers’ righthanded starter and former American League Cy Young Award winner. Greinke can be a free agent at the end of the season and it appears the Brewers have made it known that they’d listen to offers.

The Red Sox have two strong links to him — vice president of player personnel Allard Baird was the general manager in Kansas City when Greinke was going through his anxiety disorder, and current Sox pitching coach Bob McClure was Greinke’s pitching coach.

McClure has said he believes Greinke could handle the pressure in Boston. He sees no reason why Greinke couldn’t flourish in any big market, which is contrary to the thinking of some around major league baseball.

With the return of Crawford, Brent Lillibridge was designated for assignment. It’s likely that Lillibridge will be picked up by another team because of his versatility, and it wouldn’t be shocking if the White Sox tried to reacquire him. It leaves the Red Sox with only righty Zach Stewart to show for the Kevin Youkilis deal. Valentine said that with Ellsbury back, there wouldn’t be many center field opportunities for Lillibridge, and with Nick Punto on a two-year deal as a utility man, other opportunities for Lillibridge would have been limited . . . The next interesting move will come Thursday, when Dustin Pedroia comes off the disabled list. Who will go then? The obvious choice is Pedro Ciriaco, but given the way in which he’s played, it may not be him . . . Valentine doesn’t think having four lefties at the top of the order like he did Monday night — Ellsbury, Crawford, Ortiz, and Gonzalez — is a big issue. He believes Ellsbury, Ortiz, and Gonzalez all hit lefties well and Crawford also can hold his own . . . Valentine said he doesn’t know whether Crawford will stay in the No. 2 hole, where he was Monday night, but he said Crawford does not like hitting at the bottom of the order like he did last season (mainly out of the seventh hole) so often . . . Daniel Bard’s ERA for Pawtucket rose to 8.31 (in 16 appearances) Monday night as he allowed two runs in one inning. He allowed two hits, including a two-run homer, and also walked one and threw a wild pitch . . . The reason assistant pitching coach Randy Niemann was taken off the bench was so McClure could better assume his normal pitching coach duties. Niemann is a longtime Valentine coach, was his bullpen coach with the Mets, and he served as Sox pitching coach when McClure left the team for three weeks because of a family matter. Valentine relies heavily on Niemann; the decision to not keep him on the bench was made at the executive level, according to a team source.