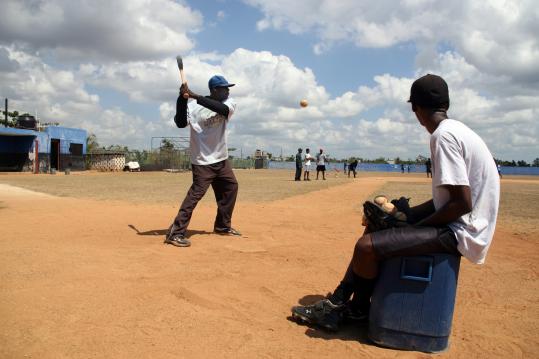 Bobby Valentine has always had more than a bit of Hollywood in him. The flashy, outspoken Red Sox manager can sometimes seem as though he’s been sent from central casting. Now Valentine has gone Hollywood for real. He has produced a film about baseball in the Dominican Republic, and that film, being released this week, is the subject of considerable controversy.

“Ballplayer: Pelotero,” which comes to the Coolidge Corner Theatre in Brookline for a preview Wednesday and opens there on Friday, has not gone over well with Major League Baseball.

The league is displeased with the film’s allegations of corruption and coercion in the signing process for young prospects from the Dominican Republic. MLB spokesman Pat Courtney said in an e-mail that the league “had a conversation with the Red Sox about the inaccuracies and misrepresentations that were in the documentary,” but did not elaborate on what they were.

Beyond that, however, Valentine is tightlipped about criticism of international scouting in the Dominican Republic. One reason might be that he now has a high-profile baseball job he did not have when he agreed to produce the film.

“Most people have no idea how hard these players work,” he told the Globe by phone before a recent Red Sox game. “They live in rooms with eight other guys; when they make it [to the majors] they totally appreciate it.”

The film is the first funded by Makuhari Media, a sports film production company Valentine formed in 2010 with Andrew J. Muscato. Muscato tracked Valentine’s 2007 season as manager of the Chiba Lotte Marines for the ESPN Films documentary “The Zen of Bobby V.”

Baseball is the economic and cultural lifeblood of the Dominican Republic; as the documentary notes, some 20 percent of professional baseball players hail from the island. When interested teams question Sano’s age and ask him to produce extensive documentation (which he does), some observers see it as a conspiracy to raise suspicions about whether he’s lying. That uncertainty would make him cheaper to sign.

The most explosive scene is when Pittsburgh Pirates scout Rene Gayo tells Sano’s family that Sano is “not going to be cleared” of an investigation into his age — unless the 16-year old signs with the Pirates immediately. If he signs, Gayo says in the film, the investigation disappears. A Sano family member later calls Major League Baseball “a mafia.” (Gayo, in response to an earlier media inquiry, declined to comment, sending inquiries to the Pirates oganization.)

“We took pains not to have the film come across as a heavy-handed indictment,” said Trevor Martin, a 2008 Tufts University graduate who directed the film with Jon Paley and Ross Finkel. The filmmakers lived in the Dominican Republic for two years during production. “It’s a complex issue. We leave value judgments up to the viewer.” MLB, he added, “did not cooperate” in the making of the film. “Maybe they felt we saw something that they didn’t want us to see.”

The Red Sox referred all questions to Major League Baseball.

“Everyone’s intrigued by it, no one’s ever captured it,” an animated Valentine is seen saying in a video on YouTube filmed in October at the Hamptons International Film Festival. “I’m honored to be part of this project that actually captures what it’s like to be a 14-year-old with a dream and some talent, and eventually when they’re all of 16, be able to sign a multimillion dollar contract.”

He said the film explores how there are “agents and parents and family members who try to mold these players into what they want to be, for selfish reasons and for the right reasons, to lift the kid out of poverty and into a brave new world.”

Valentine told the Globe that the film is “very cool visually. I love the shots of cows in the streets while kids are playing. I have vivid memories of roosters in the outfield when I played [winter ball] there in the ’70s with the Dodgers.”

Although the film credits him as an executive producer, Valentine said Makuhari (named for a waterfront area in Chiba, Japan) is “Andrew’s baby” and Muscato is the hands-on guy. “I just said things like ‘What a good swing’ or ‘That looks like a good, talented player.’ ”

Martin, the director, said Valentine did more than bankroll the film. “He’d come in and watch some footage and provide a professional baseball eye. He’d explain big-picture stuff about baseball,” the director said. “Having such a recognizable and respectable guy like him adds legitimacy [to the film] in the baseball world.”

“The system is set up so it allows [MLB] to sign large numbers of players for pennies on the dollar and export them en masse to the US to be sold. It’s a form of colonialism,” he said. “It’s sobering to see the meat-market element at play. On the other hand, MLB brings money into the island and provides jobs in baseball, and not just for players.”

Red Sox slugger David Ortiz, one of baseball’s highest-profile Dominican players, insists things are better now than when he came up. Though he has not seen the documentary, he has plenty to say about “buscones,” a term on the island for the trainers who often exploit young players.

“The buscones can take advantage of the kids and keep a big percentage of the money,” said Ortiz, originally signed by Seattle in 1992. “You hear a lot of horror stories. But Major League Baseball is starting to control things more, and that’s good for everybody. It will cut down on the corruption. I was lucky; I had my father to watch out for me. But some kids are on their own, and they trust the wrong people.

“The worst thing I have heard is some scouts will offer you a bonus and then want some of the money back for themselves. But it’s much more organized now with the money and MLB is keeping an eye on things. There’s one bank now that handles all the bonuses. It’s a much better system than what it was before. I give MLB a lot of credit for stepping in.”

As the movie points out in its final minutes, MLB regulations were toughened the year after filming, including better monitoring of age verification.

Valentine and Muscato expect to be on hand to answer audience questions following the screening of “Ballplayer: Pelotero” Wednesday night in Brookline. Valentine said that although some Sox players know about his producing sideline, no one has talked to him about it.

“I had [‘Pelotero’] playing on the bus during spring training but it hadn’t been finished yet,” he said. “It was a spring game, so not all the players made the trip. Some of them watched it and they liked it. I think Dominican players will love it. It’s a humble existence many have come from. They had only one way out.”

Peter Abraham of the Globe staff contributed to this report. Loren King can be reached at loren.king@comcast.net.