Scott stands behind comments about Fenway 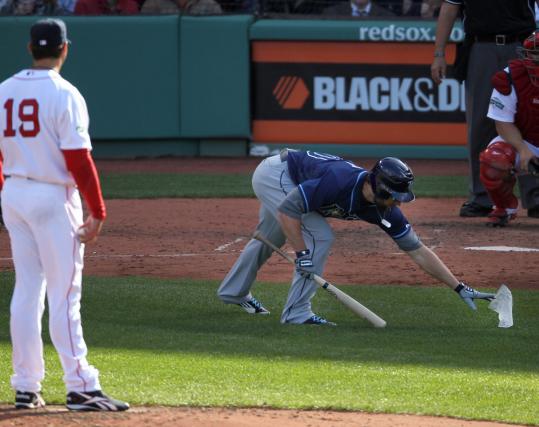 For all the pageantry on display as the Red Sox began a season-long celebration of Fenway Park’s 100-year anniversary, at least one person in uniform Friday said he wouldn’t mind seeing another kind of party thrown for the lyric little bandbox. A going-away party.

Tampa Bay designated hitter Luke Scott hasn’t endeared himself to Red Sox fans with his recent comments about the team’s park and fan base, calling the former a “dump’’ and the latter “vulgar.’’ Not surprisingly, he was met with a loud chorus of boos during introductions.

Before the game, Scott acknowledged the history of the venue, but did not apologize for anything he’s said. In fact, when it comes to Fenway Park, he offered a suggestion.

“They should do like New York did and get a new one, get a new park,’’ Scott said. “If you want to make it a monument - this is all my opinion - make it a monument and play a few games a year there, by all means. But build a big state-of-the-art stadium. Have Boston build a bigger stadium, you could model it the same way, put more seats in, they would pack it. People come out here in droves.’’

Like before, Scott was adamant that his thoughts are from a player’s perspective, for logistical and preparation reasons. When it comes to the park’s nostalgic factor, he claims he’s on board.

“As a fan, I’d say Fenway Park would be a pretty cool place to watch a baseball game,’’ Scott said. “I’m talking purely from a place to come and work. We’re sandwiched in [the visitors’ clubhouse] like sardines, there’s one small cage that’s way the heck over there. To come here and do my job, it’s not as easy, it’s not as comfortable. That’s what I’m more concerned about. Is it going to be a good place for me to come and get my work in to where I can give it my best?

“There’s much better places to work in the major leagues. It’s just not as good. It doesn’t mean that this is not a special place. There’s a lot of great memories here, a lot of history here, and all that stuff is wonderful, don’t get me wrong. I’m not downplaying that at all. I’m just speaking, separating it from a major league player coming to a place to work, this is not as up to date, it’s not as good as other places are.’’

He said Fenway Park isn’t the worst major league stadium he’s played in - another old icon, Wrigley Field, is first (or last) on his list - but he said he’d throw his support behind any initiative to find the Red Sox a new home.

Scott also found time to discuss Red Sox fans, whom he complained about a few months ago, saying, “The fans come in and they take over the city. They’re ruthless. They’re vulgar. They cause trouble. They talk about your family. Swear at you. Who likes that? When people do that, it just gives you more incentive to beat them.’’

He softened that a bit Friday, taking a complimentary approach, especially when asked about how he’d be received.

“I believe the Boston fans will come out and support their team, as they’ve done for many, many years. I don’t play for the Red Sox, I play for the Rays, that’s who I’m excited about,’’ Scott said. “Every baseball team, every city is going to have fans that can be obnoxious. That’s part of the game. Does it fuel players sometimes to play better? Yeah, it does.

“Just like anywhere else, you’ll find some people who go about cheering for their team in a different way that’s not as clean as others, and that’s their decision. I’m not worried about the fans. All I’m concerned about is the guy I’m facing on the mound.’’

On Friday, that ended up being Josh Beckett. Scott, who had missed the last three games because of a hamstring injury, hit for Reid Brignac in the seventh inning, and was again met with a full-throated reaction from the Fenway faithful.