Kevin Youkilis scuffling after 0-for-8 start 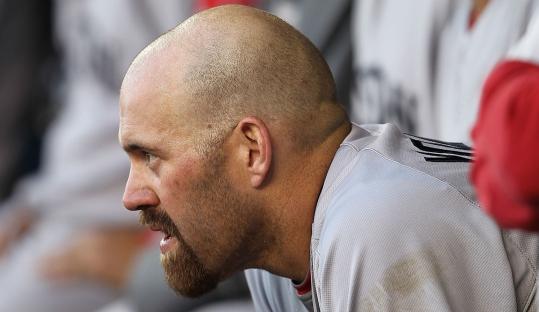 Kevin Youkilis, still looking for his first hit, and the Sox haven’t seen anything to like this season after dropping their first two games to the Tigers. (Leon Halip/Getty Images)
By Michael Vega Globe Staff / April 8, 2012
Text size – +

DETROIT — His struggles appear a microcosm of the larger issues at hand for the Red Sox. After suffering a humiliating 10-0 shellacking Saturday against the Detroit Tigers at Comerica Park, there wasn’t much to say about the team’s struggling offense.

Just two games in, the 2012 campaign seems to be taking on an eerie resemblance to last year’s 2-10 start.

‘‘I can only speak for myself right now,’’ said Youkilis, who went 0 for 4 with a pair of strikeouts, mirroring his Opening Day performance Thursday. ‘‘I didn’t have a couple of good at-bats. I’m in-between swings right now, so we’ve just got to figure it out and once we get going, we’ve got to get clicking and we’ve got to get hot.’’

‘‘Spring doesn’t really tell you much about what’s going to happen. But the big thing is trusting in your abilities and having confidence and doing the little things.’’

Said designated hitter David Ortiz: ‘‘He’ll be all right. Youk is a good hitter. It’s only been a few games. He’ll make an adjustment. He’s done it before.’’

Youkilis had two hits, both doubles, in his first two games last season before going on a dismal stretch of 0 for 14 with six strikeouts.

‘‘You never know in baseball,’’ Youkilis said. ‘‘It’s a game that’ll eat you up sometimes and [tick] you off. Sometimes it’s a game that just comes and you feel it. The big thing is that you can’t stress out. You’ve got to bear down and keep going at it. It’s only two games and I’mquite sure I’ve had two games like this before. It’s not going to be the first or the last.’’

Youkilis kept coming back to the fact that it’s only two games.

‘‘Yeah, everyone here is going to have 500-plus more at-bats, hopefully, if you’re a starter,’’ he said. ‘‘It’s a long way to go. Just like guys can get hot, guys can get cold. So this game is about riding the waves and you just got to ride it out and tomorrow we’ve just got to come out and hit.

‘‘I was just out in front a little bit on a couple of balls today and if I stayed through the ball and hit it up the middle, I would’ve got a few hits.

‘‘That’s what you’ve got to do; look at the positives. Even though it was a negative result, sometimes you learn from your mistakes. I think that’s going to be the key — learning from your mistakes and building on it, because there’s 160 more games and I plan to do a lot better than I have the last two games.’’