Clay Buchholz is healthy and ready to pitch in

He’s hoping back ailments are over 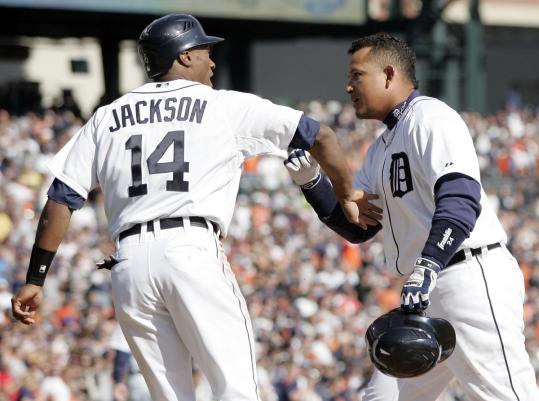 DETROIT - Clay Buchholz has pitched in 78 major league games over parts of five seasons. But he expects to be a little nervous when he takes the mound at Comerica Park on Sunday.

Buchholz also will be looking to get the Red Sox a victory after Saturday’s 10-0 loss dropped them to 0-2.

The righthander will be pitching in a major league game for the first time in nearly 10 months, a back injury having cost him the final 3 1/2 months of last season.

“It’s been a while. It seems a lot longer than 10 months because last year I had to get to the field early and go through the same monotonous routine every day,’’ he said. “But I think it was for the good for the simple fact that all the stuff I did to get stronger has paid off.’’

Buchholz pitched at Nationals Park on Tuesday in the final spring training game, going 5 2/3 innings before a crowd of 30,568. That helped him prepare for Sunday’s game.

A healthy Buchholz could be the difference in the Red Sox returning to the postseason or fighting to stay out of fourth place. He was 17-7 with a 2.33 earned run average in 2010, making the All-Star team for the first time and finishing sixth in the Cy Young voting.

He was pitching reasonably well through 14 starts last season (6-3, 3.48) when the injury knocked him out.

His last start came June 16 against the Rays at Tropicana Field. Buchholz allowed one run on two hits over five innings before leaving with a sore lower back.

Buchholz said that night he didn’t expect to miss a start. But he never returned, what was initially diagnosed as a pulled muscle proving to be a stress fracture.

As the Red Sox collapsed in September largely because of poor starting pitching, Buchholz could only watch.

Buchholz had one of his best starts of 2011 against the Tigers, throwing seven shutout innings against them at Fenway Park May 18. He allowed four hits, walked one, and struck out seven in a game the Sox won, 1-0.

“I watched the video of that [Friday]. They have a lot of the same guys in their lineup,’’ Buchholz said.

From a health standpoint, Buchholz has been fine. He made five uneventful starts in spring training and showed command of all his pitches. There was competitive rustiness but no physical concerns.

Doctors have told Buchholz there is little chance the stress fracture will reoccur.

“I feel really good. There have been no ill effects of anything. With the back, it has just been regular soreness,’’ Buchholz said. “It’s definitely been good.’’

Manager Bobby Valentine was impressed by what he saw of Buchholz in spring training.

“His pitches were all working for him,’’ said Valentine. “He didn’t necessarily have the full plate of competition under his belt. But he threw the ball the way he wanted to.

“Clay’s a guy we’re counting on to be a good pitcher for us. Absolutely.’’

Help is on the way for the Red Sox bullpen.

Hill struck out the three batters he faced, throwing 17 pitches against Lakewood. Miller allowed two hits in a scoreless inning and struck out two.

Hill is coming back from Tommy John surgery and Miller from a strained left hamstring. For pitchers, rehab assignments can last up to 30 days. So, at worst, the Red Sox project them to be back around May 7.

Miller, who has a minor strain, could return sooner than that. Hill may take longer given that he did not get in any formal games during spring training.

Hill’s comeback is impressive given that his surgery was last June 9. Tommy John patients usually take 12-14 months to fully recover.

Henry Owens, a supplemental first-round draft pick last June, was scheduled to make his pro debut in the same game. The 6-foot-6-inch lefthander signed too late to play last season.

The left fielder continues to take batting practice on the field and his participation in an extended spring training game is “imminent,’’ according to Valentine.

Rather than travel to Boston for Opening Day festivities, Crawford will stay in Florida and continue his work.

Crawford will start as a designated hitter before working his way into the field.

“We’re trying to get a very comprehensive, yet not rushed, program for him,’’ Valentine said.

Crawford would go from extended spring training to a minor league assignment before rejoining the Red Sox. The hope is that will come in May.

Thursday’s opener finished at 4:17 p.m. and Saturday’s game started at 4:10 p.m., leaving the Red Sox just shy of 48 hours between games. The team held an optional workout at Comerica Park Friday. All of the position players showed up and most of the pitchers, Valentine said. “It was optional hitting. No one wanted to get optioned,’’ Valentine said . . . The crowd of 44,710 was the seventh-largest in the 13-year history of Comerica Park . . . The 10-0 victory was the largest shutout for the Tigers against the Sox since a 13-0 victory July 28, 1948, at Briggs Stadium . . . The Red Sox have used all 25 players on the roster after two games.