Sox' Bard getting into a routine as a starter 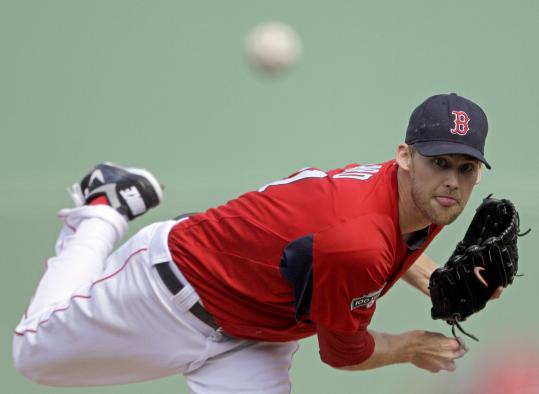 Daniel Bard fires in the first of two scoreless innings, in which he fanned two and walked one. (David Goldman/Associated Press)
By Peter Abraham Globe Staff / March 7, 2012
Text size – +

FORT MYERS, Fla. - For Daniel Bard, moving from the bullpen into the rotation is not as complicated as it might appear from the outside. The Red Sox righthander is convinced he will develop the durability and the necessary assortment of pitches to succeed.

He has worked on holding runners and impressed the coaching staff with his ability to field his position.

It’s finding ways to kill all that extra time that Bard has trouble with.

As a reliever, Bard had to be ready to pitch every day. In that sense, he wasn’t much different than a position player. He would stretch, get his arm loose during batting practice, then make his way out to the bullpen to watch the game and wait for his chance to pitch.

But starters are baseball’s independent contractors. They develop their own schedules and on the days they pitch, that routine is sacrosanct.

Outside of reviewing the game plan with the pitching coach and catcher, a starter is free to prepare for the game however he sees fit, and baseball protocol requires his teammates to respect that.

Bard started a game Tuesday for the first time since 2007 when he was in the minor leagues. He arrived at JetBlue Park well before the first pitch against the Baltimore Orioles unsure what he was supposed to do.

“It was a totally different feeling,’’ said Bard. “I haven’t had it in years. Getting to the park three hours before the game and having nothing to do for two hours is really weird.’’

Bard busied himself asking his more veteran teammates for advice. Their message was that he had to find what suited him best.

Josh Beckett walks through the clubhouse holding a baseball and ignoring everybody around him. Jon Lester and Clay Buchholz listen to music. Tim Wakefield used to do crossword puzzles. Curt Schilling demanded that nobody talk to him.

“[John] Lackey walks around with no pants on and bounces a baseball and eats peanut butter and jelly,’’ Bard said. “I’ll just try and be me, whatever that is. Kind of find it.

“I don’t think you ever quite figure out what to do with that time. Most guys try and keep their mind off the game.’’

“Not the recommended routine before a game,’’ he said. “And not a real pretty sight in my imagination, to tell you the truth.’’

It worked out well for Bard Tuesday as he threw two shutout innings against a thin Baltimore lineup. He walked one, struck out two, and threw 21 of his 31 pitches for strikes.

Bard did not throw any changeups, a pitch Valentine feels he needs to have. But he did show good action on his two-seam fastball, a pitch that could prove valuable in his new role.

Bard can overwhelm batters with a four-seam fastball that comes in at 96-99 m.p.h. The two-seam fastball sinks and is thrown with the intention of inducing contact, not strikeouts.

For a starter, getting quick outs is crucial, and that pitch will help Bard go deeper into games.

“It’s a pitch I’m very comfortable with,’’ Bard said. “Going back to when I was in college, I probably threw more two-seamers than four-seamers. This spring, so far, I’ve been real consistent with the movement.

“I’ve had trouble [in previous seasons]. Some would straighten out on me and others would sink a foot. I had a hard time finding that consistency with it. This spring, so far, it’s been really good and consistent.

To bolster his confidence in the process, Bard went on the Internet last week to look up games he pitched at North Carolina. He was one of the best starters in the country and regularly went deep into games.

“It’s just a nice reminder,’’ he said. “That seventh, eighth inning seems like foreign territory to me right now but it’s definitely something I’ve done before. Pitch-count-wise, it shouldn’t be a problem.’’

Bard is scheduled to pitch three innings against Tampa Bay Saturday. The plan is to build up to six innings and be able to throw 100 pitches or so before the season starts.

By then, Bard hopes that his pre-start routine - one that involves pants - will be figured out. But even if that takes a little while to figure out, he’s confident in what lies ahead.

“I’m not going to go out and guarantee any great success, but I’m not going to rule it out, either,’’ Bard said. “I can tell you that in my mind, I don’t see any reason why I can’t go out and be as good as anybody on this staff, and we have some really good pitchers.

“I’m not going to put any caps on what my expectations are.’’