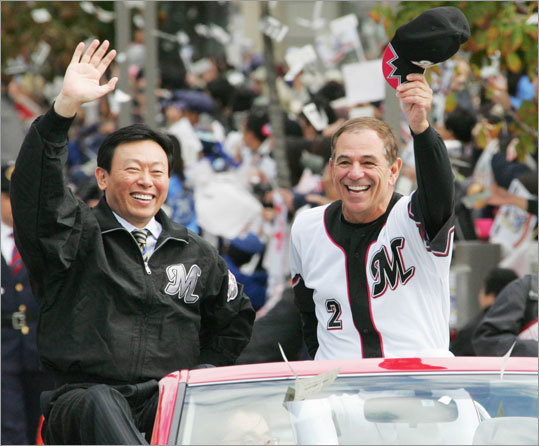 From "Bobby Beer" and "Bobby Burgers" to turning a perpetual doormat into a must-watch team, Bobby Valentine certainly left his mark during his time as a manager in Japan's baseball league.

Valentine managed seven seasons in Japan, in 1995 and from 2004 to 2009, and his bold attitude really struck a chord with Japanese baseball fans. He was popular and well-liked nationwide.

"When he was managing there, he was super-popular with fans," says Deanna Rubin, who watched Valentine firsthand and blogged about him on her blog Marinerds, etc., "mostly because he was super-accessible. He'd go out and greet fans and sign stuff for everyone sitting in the stands before pretty much every single game. And he used to ride a bike to the stadium, so people were always saying how they saw him out riding his bike."

Valentine turned the Chiba Lotte Marines, the Pacific League's perpetual doormat, into something exiting. Most importantly, he turned them into a winning team that won the Japan Series in 2005. That year, his Marines won the inaugural Asia Series against the winner of the Korean Professional League, and he even challenged the World Series champion Chicago White Sox to a game.

He once ranked first in a list of men you would like to have as your boss in Weekly SPA, a business and entertainment magazine. After the Japan Series win, there was a little Bobby-mania. They made and sold Bobby Beer. Bobby Burgers were sold in Lotteria, the fast-food chain owned by Chiba Lotte's parent company. Even a little shrine, "Bobby Jinja" was elected in a nearby shopping mall, where fans can go to receive good luck.

He was flashy and exciting. He was friendly and likable, yet innovative and bold and not afraid of change. He improved the stadium for the fans. He changed the batting order daily -- something Japanese fans are not used to seeing -- he platooned players, he put a pitch count limit on the pitchers and his style was dubbed "Bobby Magic."

Fans even wrote him his own cheer/fight song. Marines fans chanted and sang a fight song for him at the game. Japanese fans do this for players, but almost never for managers.

Perhaps most telling was his last year in Japan. After Valentine took the Marines to the Japan Series title, Lotte signed him to a contract worth a reported $20 million for four years, which was the second-largest annual salary for a manager at the time in the world, behind only the Yankees' Joe Torre.

But when the world financial crisis struck and the team struggled, the team announced Valentine would not be back after the 2009 season before the season even started. Fans were in protest mode from the beginning of 2009 season, and fans organized a grass-roots movement called "Bobby 2010," to gather signatures on a petition to keep Valentine in Chiba after the season. By June, they gathered more than 110,000 signatures and submitted them to the club.

"The craziest thing about 2009 was just how everyone was standing behind a gaijin (foreign) manager, really." says Rubin. "I mean, living in Japan as a gaijin is always a little bit weird, people have a lot of prejudice against foreigners, but the Lotte fans got together and started that campaign and got that much signatures. 110,000 signatures may not sound like a lot until you take the context of this being a fan-organized movement for mostly Japanese people signing to say they were in favor of keeping an American manager for the team."

After the March 11 earthquake and tsunami disaster hit in Fukushima this spring, Valentine was involved in many charity and fundraising efforts. Part of the reason for his trip to Japan was to attend a charity event and auction that he planned. This only added to his popularity in Japan, and he is still enormously popular.

Daigo Fujiwara is an infographics designer in Editorial Design department of the Boston Globe. He produces "Boston Globe Red Sox Podcast" and blogs about Red Sox in Japanese at Go-RedSox.com.