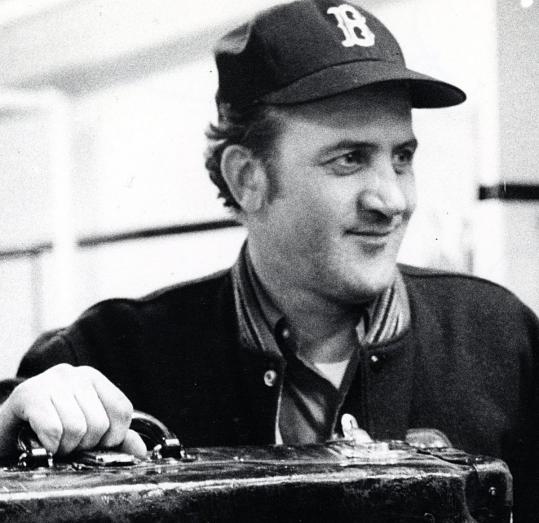 Crawford, a student at St. Sebastian’s School in Needham, treasured his summer job with the Sox. He rubbed elbows with some of the franchise’s greatest players: Roger Clemens, Wade Boggs, Ted Williams.

Crawford said he arrived early that day to help pack for the team’s departure for the West Coast. That night, he alleges, Fitzpatrick sexually assaulted him in the clubhouse restroom.

His accusation - and that of a second man who, like Crawford, was a teenage clubhouse attendant in the 1990s - is the latest chapter in a sex abuse scandal many believed had been relegated to the Red Sox’s past. The allegations mark the first time that Fitzpatrick is accused of assaulting boys in the Sox clubhouse - other cases involved spring training - and come at a time of heightened awareness of the issue in the sports world.

The men notified Sox executives last week they are seeking $5 million each in damages. They said there were no witnesses to their alleged abuse, and they did not discuss it with each other until recently. Medical records show Crawford reported the alleged abuse to Norwood Hospital counselor in 2006. Fitzpatrick died in 2005 at age 76.

The Globe does not identify alleged victims of sexual abuse, but Crawford consented to go public. He maintains the Sox were at fault. “I’ve held one of Boston’s darkest secrets all these years, knowing people would have been blown out of their seats if they knew what the Red Sox let happen to me,’’ he said.

Sox officials responded: “The Red Sox have always viewed the actions of Mr. Fitzpatrick to be abhorrent,’’ the club’s legal counsel, Daniel Goldberg, said in a prepared statement. “When the team, then under a previous ownership group, became aware of the allegations against Mr. Fitzpatrick in 1991, he was promptly relieved of his duties.

“The club is unaware of any specifics regarding the matters brought forward recently by two individuals,’’ Goldberg said, adding that the team would not comment further.

Crawford and his friend, who asked not to be identified, are the ninth and 10th former Sox clubhouse attendants - and the first from Boston - to publicly accuse Fitzpatrick of sexual abuse.

In 2003, the team settled a $3.15 million lawsuit with seven Florida men who alleged Fitzpatrick molested them during spring training beginning in the early 1970s. Fitzpatrick pleaded guilty in 2002 in Florida to four counts of attempted sexual battery related to the case.

In 1991, the Sox paid $100,000 to a former clubhouse attendant after he displayed a sign at a televised game against the Angels in Anaheim that said, “Donald Fitzpatrick sexually assaulted me.’’ The incident is alleged to have occurred on the first leg of the West Coast trip for which Crawford said he helped Fitzpatrick prepare.

Fitzpatrick remained with the team for about two weeks after the Anaheim incident. Sox officials said then that Fitzpatrick elected to take an indefinite leave of absence. He never returned.

Crawford said he decided to come forward because he felt empowered by Senator Scott Brown’s revelation in February that he was sexually abused as a child more than 40 years ago at a Cape Cod summer camp.

The second man said he came forward in part to show the scandal damaged youths in Boston as well as Florida. “It gives me a chance to help people heal and reveal the hidden truth,’’ he said. “This is a point of history that should not be ignored.’’

The statute of limitations has expired for the latest alleged victims to seek criminal charges or file a civil suit. The Sox have scheduled a meeting this week with the accusers’ lawyer, Mitchell Garabedian, to discuss the financial demand of the men.

The new allegations widen the sexual abuse scandal in sports in the wake of accusations against former coaches Jerry Sandusky at Penn State, Bernie Fine at Syracuse, and Bob Hewitt in professional tennis.

The case also sharpens the focus on the obligation of institutions to protect their employees from sexual assault.

All the men who have publicly accused Fitzpatrick of sexually abusing them are African-American.

“Don Fitzpatrick was molesting children over the course of more than 20 years, and someone in the Red Sox organization had to know about it and turned their back on the children,’’ said Garabedian, who helped successfully sue the Archdiocese of Boston and the Rev. John J. Geoghan for a combined $95 million in the Catholic Church’s sexual abuse scandal.

“No amount of money is going to help these men regain what was stolen from them by a serial pedophile and irresponsible supervisors,’’ Garabedian said.

Social Security records show Crawford earned $1,260 for working 30 days - $42 a day - for the Red Sox in the summer of ’91. He said he got the job from the other alleged victim, who also grew up in Boston and commuted to St. Sebastian’s.

The other man, who is 37, married with children, and working in public education, said he landed the job with help from former state Senator Dianne Wilkerson, who is serving a 3 1/2-year federal prison sentence on an unrelated bribery conviction. The man said he was traveling with the Sox during the 1991 allegation in Anaheim.

After that incident came to light, he said, he waited for team officials to ask him and other teenage attendants if Fitzpatrick had ever acted inappropriately with them. “No one from the team pulled us aside afterward and said, ‘I just want to make sure you’re OK,’ ’’ he said. “It seemed like they just wanted to move on to the next chapter in Red Sox history. Unfortunately, this is part of that history.’’

Crawford’s life deteriorated after his Red Sox experience. After high school, he played one year of basketball at Endicott College, then attended the University of Hartford before dropping out.

Crawford then bounced from one social service job to another before he spent six months in jail in 2007 for a drug conviction. He has fathered five children with five women and has faced legal action over child support issues.

He attributed his problems in part to his alleged sexual abuse.

“I definitely think suppressing everything for so long hurt me,’’ he said. “I feel like I’ve been running all my life. I’ve burned a lot of opportunities.’’

Fitzpatrick was a favorite of owner Tom Yawkey, often playing catch with him at Fenway. A Brookline native, Fitzpatrick rose from batboy in 1944 to longtime clubhouse manager, first for visiting teams, then the Sox. He counted many players, including Williams and Carl Yastrzemski, among his friends.

When he died, Fitzpatrick was serving a 10-year suspended sentence and 15 years probation for the Florida convictions. The court also had ordered him to pay each victim $10,000 in restitution.

Before sentencing, a judge reviewed evidence that included a transcript of a phone conversation between Fitzpatrick and one of the victims.

“I couldn’t help it,’’ Fitzpatrick was quoted as saying. “You satisfied me,’’ but “I hated myself for it.’’