Time to go and get this Met

Shortstop Reyes is what they need 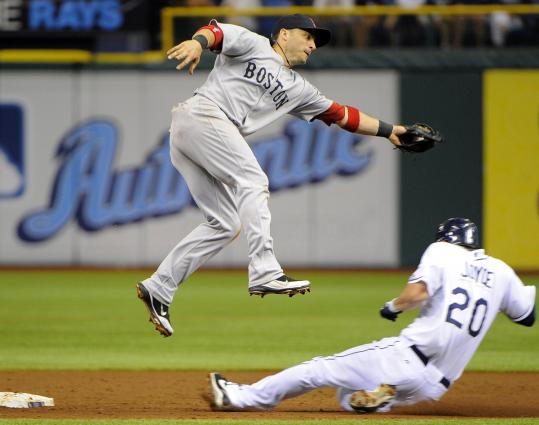 Marco Scutaro snagged this throw, but he didn’t have one of his better days in the field. (Brian Blanco/Associated Press)
By Nick Cafardo July 17, 2011

ST. PETERSBURG, Fla. - You don’t go out and obtain Adrian Gonzalez and Carl Crawford to finish second to the Yankees. You get those guys because you’ve committed to winning it all. And to not finish things off would be foolish.

So, as the trade deadline approaches in two weeks, the Red Sox have to identify what they need to accomplish their goal.

From this perspective, they should load up the truck of prospects and send them to the Mets for shortstop Jose Reyes.

“I know that everyone seems to think the Red Sox are going to bring in Carlos Beltran, or that they need a pitcher, but today proved to me that their biggest need is to get Reyes and solidify that shortstop position,’’ said an American League scout who watched the Sox beat the Rays, 9-5, yesterday at Tropicana Field. “They don’t need much here. And if their pitchers all come back in due time, they probably don’t need to go there. What they need is an impact player at that very crucial position on the field. And there’s nobody better than Reyes right now.’’

The scout, and anyone who watched yesterday’s game, noticed that Sox shortstop Marco Scutaro didn’t have the best of days behind John Lackey. He committed a throwing error on a ball hit by the leadoff batter, and later in the first inning couldn’t get to another ball, although that would have been a good play.

Scutaro’s throwing - because of a weakened shoulder that plagued him all of last season - doesn’t inspire confidence, and Jed Lowrie didn’t offer any stability when he started at shortstop.

Reyes has missed the last two weeks with a hamstring strain, but is eligible to come off the disabled list tomorrow. He may do a short rehab stint in Brooklyn, but for the most part is ready. There’s been great debate over whether the Mets will deal Reyes, an impending free agent, or hope they can sign him this offseason. But teams are about to line up to see what it would take to get a deal done.

You can argue that other than Gonzalez and the Blue Jays’ Jose Bautista, Reyes has been the game’s best player this season. He plays a premium position, and is hitting .354 with a .398 on-base percentage, a .927 OPS, and 30 steals from the leadoff spot. He has one of the best shortstop arms in the game, and his athleticism is off the charts.

Prone to injury? Sure. But you take the chance with such a gifted player. And the Red Sox are one of three or four teams with the resources to sign Reyes long term.

This would mean scrapping the idea of Jose Iglesias being the shortstop of the future. But you do that for the 28-year-old Reyes, and use Iglesias, who has yet to show he can hit at the higher minor league levels, in this deal or another deal.

There would be issues, certainly. One would be the number of leadoff hitters on the team. That one’s easy. Reyes is your leadoff hitter. Jacoby Ellsbury hit his 13th home run yesterday and appears to have middle-of-the-order power. He’s become a Crawford-type player whose power and ability to drive in runs can be used lower in the order. The lineup would be incredibly fast, powerful, and athletic, both offensively and defensively. The middle of the order would be predominantly lefthanded, but you take your chances.

Would the switch-hitting Reyes only be a rent-a-player? If he is, and he leads the Sox to a championship, it’s worth it. And why couldn’t the Sox sign him? They are likely to re-sign David Ortiz, but J.D. Drew, Mike Cameron, Scutaro, and Jonathan Papelbon may all come off the books.

Although Sox owner John Henry hates the idea of the luxury tax, he’s always been willing to pay it if it means adding a piece to put the team over the top. Knowing the way the Sox operate, they will, if they haven’t already, explored the possibility of Reyes and what it would take to get him, because they usually think big first.

Even though right field has been a glaring weakness, the rest of the lineup has been so productive that you can skate by with Drew and hope he gets hot and helps down the stretch. You could also move Josh Reddick to right field, though he may be a piece the Mets would want.

When races are close, it takes big moves to get a team past the competition. For instance, the Yankees are exploring a deal with Colorado for Ubaldo Jimenez.

All teams think pitching first, and the Red Sox should as well. But if they’re confident that Jon Lester (recovering from a lat strain) and Clay Buchholz (back) can make it back and be pitching strong by August, and if Lackey is turning his season around, then they can address other things.

Shortstop is becoming a concern. There’s no position on the field that’s a bigger confidence builder or downer for a pitcher. The Sox were ignited by Orlando Cabrera in 2004, and Julio Lugo, with all his faults, had his best stretch in 2007 for a championship team.

Reyes would give this team a major boost.