THIS STORY HAS BEEN FORMATTED FOR EASY PRINTING
Orioles 4, Red Sox 3 (11 innings)

Red Sox get nicked up in the 11th 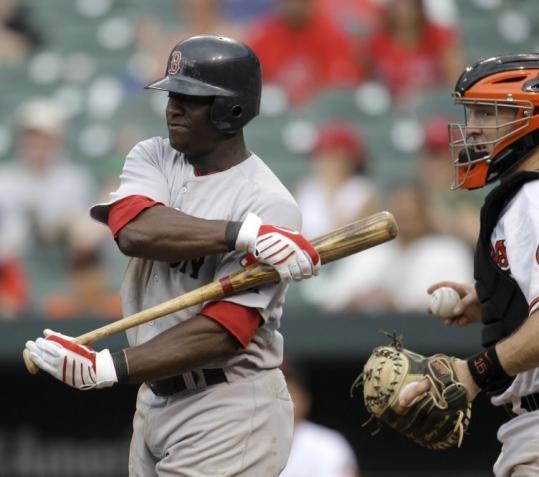 Sox center fielder Mike Cameron reached base three times, but was not pleased when he struck out to lead off the 11th. (Rob Carr/Associated Press)
By Amalie Benjamin Globe Staff / June 7, 2010

BALTIMORE — The beleaguered Orioles jumped out of their dugout as if released, gathering in celebration near first base. Nick Markakis had ended a long afternoon that had seen temperatures starting at 90 degrees, on-and-off rain showers, and an end to a losing streak that had reached double digits.

In the 11th inning yesterday at Camden Yards, Markakis singled to center, bringing home Cesar Izturis (who had walked) for a 4-3 victory, as Baltimore won for the first time since May 25, snapping a 10-game skid. The key matchup was a familiar one, as Markakis had stepped in to face Hideki Okajima for the 23d time in his career, a stretch in which he had five hits (three doubles) against the Red Sox lefthander.

Add another single to that total and that was it for the Sox, who headed to Cleveland for a four-game set having had a chance to sweep their last two series (against Oakland and Baltimore) and failing both times. Yesterday’s game, which lasted 4 hours 20 minutes, left the Sox 1-7 in extra-inning outcomes, not where a team looking to contend wants to be.

“It was a good game,’’ David Ortiz said. “Everybody busted their butt and tried their best. They played a good game, those guys. They’ve been trying big time, trying to win a game. They put themselves together today.

“You don’t want to be that one [to end their losing streak]. But somebody played the game like they did today, you’ve got to tip your hat.’’

There had, after all, been chances for the Sox to take this one, and they hadn’t made good on those opportunities. After the Orioles scored in the eighth inning to pull ahead, 3-2, as Manny Delcarmen (who left soon thereafter with a stiff back) gave up an RBI double to Scott Moore, the Sox retied it in the ninth. After Mike Cameron led off with a single and Darnell McDonald bunted him to second, Cameron moved over to third on a single by Marco Scutaro, and scored on a sacrifice fly by Dustin Pedroia. There were two outs and a man on second, but Ortiz lined out to right.

Another opportunity came for the Sox in the 11th, when McDonald’s infield single and a wild pitch left him on second with one out. But Scutaro flew out to center, and Pedroia ended the inning with a grounder to shortstop. The Orioles then ended it in the bottom of the inning.

But the Sox had some encouraging moments, including a stellar over-the-shoulder catch in deep center by Cameron, who returned to the lineup yesterday after battling an abdominal injury. The grab ended the ninth inning, and kept the Orioles from winning it in regulation, as Ty Wigginton on first base likely would have scored on the drive.

Asked if he thought Cameron had a chance to make the basket catch, Pedroia said, “Not really. He kind of turned on the burners there and made a great play.’’

“Just had to try to make a play on it,’’ Cameron said. “I was getting close to the wall, but the ball was high enough where I had time to kind of make a decision on what I was going to do. I guess I shouldn’t say that because it’s all just reactionary when you’re out there playing.’’

In addition, John Lackey — who has struggled at times this season — submitted a gutty performance, throwing 124 pitches over seven innings. He allowed only two runs, both in the second, on an RBI single by Izturis and an RBI fielder’s choice by Julio Lugo. The Sox had scored twice in the top of the inning off Brian Matusz on a homer by Martinez after a walk to Kevin Youkilis.

“I think with each passing game, I feel more like this,’’ manager Terry Francona said. “[Lackey’s] will to compete — the second inning was a long inning, ground balls that extended the inning, with a walk — once you get into the meat of the game, I think he just loves competing. And you’re going to get the best out of him when the game is on the line. There’s been a few times now, he’s been up into pitch counts, game on the line, and you see his very best.’’

“I felt pretty good,’’ said Lackey. “Honestly, didn’t throw the ball a whole lot different than the last few, just got a few balls to go at some people, had a couple double-play balls. It was nice.’’

And yet the Sox couldn’t pull it out, ending a seven-game road winning streak. Not that anyone in the visitors’ clubhouse was concerned. It was one loss in a long season.