McDonald glad to be caught in rundown 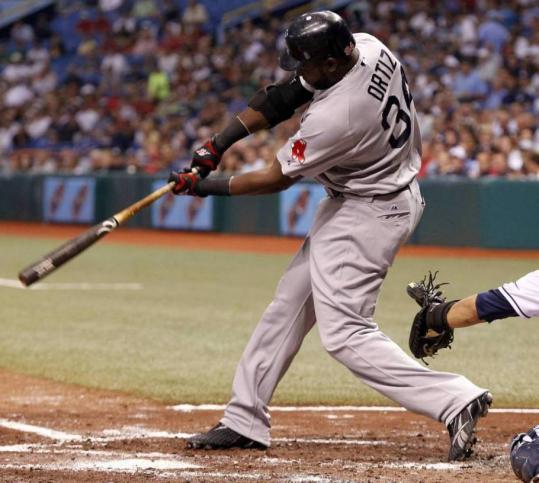 With one crack of the bat, the Red Sox had two runs, as David Ortiz doubles in the third inning, driving in J.D. Drew (single) and Kevin Youkilis (walk). (Mike Carlson/Associated Press)
By Amalie Benjamin Globe Staff / May 26, 2010

ST. PETERSBURG, Fla. — When his phone vibrated around 5:30 p.m. yesterday, outfielder Darnell McDonald was asleep, having dozed off after putting the movie “The Book of Eli’’ on pause. He was in his hotel room here, a couple of hours from the flight that would take him back to Boston after he had been designated for assignment by the Red Sox. His exhaustion was understandable.

So too was his reaction when he realized it was manager Terry Francona calling. He thought he had been traded.

“I had to make sure I wasn’t dreaming,’’ McDonald said. “[Monday] was a tough day for me. I knew what the circumstances were. Now I’m here.’’

The Sox were calling to bring him back to Tropicana Field. With the team, as usual, having delayed the roster move as long as possible, when Jacoby Ellsbury turned up with soreness and discomfort in his side after a session in the batting cage yesterday, the Sox were able to get McDonald back in time for the first pitch last night.

“Had a Superman cape in my luggage,’’ McDonald quipped.

Instead of McDonald, the Sox designated righthander Scott Atchison for assignment. That move is purely procedural, according to a team source. Atchison, who was summoned Monday from Pawtucket, will be optioned to Triple A in a couple of days, once he clears optional waivers. The team has not cut ties with the reliever with this move.

Ellsbury got an X-ray at Tropicana Field, was examined by the Rays’ doctor, and had a CT scan. There will be follow-up tests, as well. The Sox don’t know what’s wrong with the outfielder, who came off the disabled list against the Phillies this weekend after being out six weeks with four fractured ribs. As Francona said, “It was all good news. It’s still, according to their doctor, symptomatic, or how he feels.’’ But it appears clear Ellsbury will not start tonight.

The Sox needed an extra outfielder with Mike Cameron having just come off the DL himself. Cameron was activated yesterday, the reason the team needed to make a roster move in the first place. He started in center field and went 0 for 3 in the Sox’ 2-0 victory.

“It’s an hour and a half before the game,’’ Francona said. “We’re trying to cover ourselves everywhere. Thankfully guys in the front office are pretty careful about making the moves late. So we got Mac on the phone, told him we were thrilled with the adjustments he made while he was gone, [and to] come on back.’’

Ellsbury had played three games in a row before receiving a scheduled day off last night. Francona confirmed yesterday the Sox were planning on using Ellsbury as their primary center fielder even on days when Cameron is in the lineup as well. That was to lessen the impact on Cameron’s strained lower abdominal muscle and to give Ellsbury stability by playing him in center every day, and it was something Ellsbury said he believed would be for the “duration of the season.’’

But that was before the game, and before the Sox were worried enough about his health to make sure they had another outfielder on the roster.

“I think he got a little nervous,’’ Francona said of Ellsbury. “I understand that. Is it related [to his fractured ribs]? It’s hard to imagine it’s not. It was in a different area, a little bit over to the side.’’

McDonald, meanwhile, showed up just before the game. He entered in the ninth inning for Jeremy Hermida in left field, though he didn’t get the chance to hit a walkoff homer, as he had in his first appearance with the club.

One factor was key in McDonald’s return. “His flight wasn’t till 8,’’ Francona said. “Smart kid.’’

A positive step
Victor Martinez was walking significantly better yesterday, after taking a foul ball off the toe Monday night. He exited that game an inning after the injury and was taken for X-rays, which were negative. Martinez was available last night in an emergency. “A lot better than what I expected,’’ Martinez said. “At least I can put more weight on it.’’ It was unclear how soon Martinez could return to the lineup . . . Josh Beckett played long toss yesterday, and spent a little time on the mound as well, “just to get the feel,’’ Francona said. The Sox hope he will be ready for a side session Friday. Asked if Beckett was going to come off the disabled list when eligible, Francona said, “I don’t know.’’ Francona and pitching coach John Farrell sat down with Beckett yesterday. “I think the biggest thing we talked to him about is don’t worry about the date,’’ said Francona. “When you’re ready to pitch and pitch effectively, that’s what we’re shooting for. I think sometimes guys like Beckett, because they care, because they’re conscientious, because they want to carry their load, they want to do things too quick. So we really wanted to hit home, hey, get yourself feeling good and we’ll get this figured out together. And I think he probably understands that. It’s just, sometimes he needs to hear it.’’
Blue blocker
A website that tracks home runs, wezen-ball.com, clocked David Ortiz’s home run trot Monday night as the longest in the majors this season at 30.59 seconds. It was clear, though, that Ortiz wasn’t helped by getting tangled up with plate umpire Tim Tschida. As Ortiz said after the game, “When I was ready to take off, the umpire got in my way. He was trying to follow the ball.’’ The Rays were not nearly as amused. “I was probably a little upset,’’ Tampa starter Wade Davis told the St. Petersburg Times. “He’s been doing it for a while. That’s his thing — it’s Big Papi. That’s him. And I’ve seen him do it when [the ball] hasn’t gone out either.’’ In fact, Ortiz watched a ball he thought was a home run last week in Yankee Stadium, it didn’t leave the park, and Ortiz was thrown out at second base. Rays manager Joe Maddon chose to poke fun at Ortiz, saying the slow pace didn’t bother him but “he’s not as fast as he used to be.’’ . . . Manny Delcarmen, who threw a 1-2-3 seventh with a strikeout, said his back bothered him again. He said the last couple of times he’s thrown, the back has gotten stiff, but that he’s fine . . . Righthander Junichi Tazawa, who underwent Tommy John surgery this season, was at last night’s game. He spent time with trainer Mike Reinold and got a chance to see his teammates. Tazawa is not able to do much at this point, mostly working on his range of motion. “Physically I feel great, and right now I’m pretty much able to do everything that the training staff has set aside for me,’’ he said through interpreter Masa Hoshino. “Every day has been pretty repetitious for the last little while, so it’s a nice change of pace to get to see everybody. I’m glad they invited me up here.’’