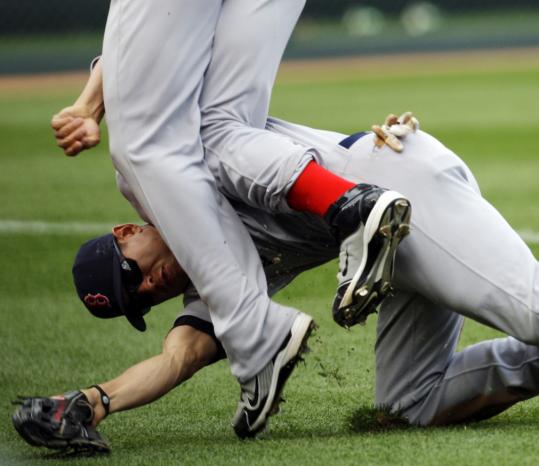 KANSAS CITY, Mo. — When Adrian Beltre plowed into Jacoby Ellsbury, Beltre’s knee striking the left fielder square in the chest, Ellsbury thought he might have broken a rib. He went down in intense pain before leaving the field with his right arm held tightly across his chest, accompanied by trainer Mike Reinold.

Fortunately for Ellsbury and the Red Sox, X-rays were negative. Ellsbury was diagnosed with a rib contusion.

Asked how he felt, Ellsbury said, “Feel like a million bucks.’’ He was clearly kidding.

“He kneed me around the ribs,’’ Ellsbury said. “That was the thing I was worried about — a broken rib or something like that. I’m sure there’s swelling. It is a little tough to breathe. But I think I’ll be fine. Didn’t feel too good initially.’’

The collision happened in the ninth inning when Beltre and Ellsbury went for a foul ball off the bat of Mitch Maier. Ellsbury said he called off Beltre early, but the third baseman didn’t hear him.

“I’m pretty much going for anything, same with him,’’ Ellsbury said. “I don’t think that we thought we’d both be there. It’s just one of those [balls] perfectly put in between us. I was going to catch it. I was right under it to catch it. It hit his glove and popped out. Just one of those plays.’’

Beltre said because Maier is a lefty, he assumed Ellsbury was shaded toward center, and he would have no chance of getting to the ball. He wasn’t shaded. He was there.

“He was in a lot of pain,’’ Beltre said. “I got scared when I saw him laying down there. I didn’t know how the outcome was going to go. It’s tough because I’m going with my head down and it’s a ball that either him or myself is going to get there on time. It’s kind of hard to call it. And I’m trying to get it until somebody calls me off. That ball was right in the middle, you have to dive and I had to really push for it. It’s a tough decision to call it or not call it.’’

Ellsbury also nearly collided with shortstop Bill Hall in the first inning, when he lost a ball in the sun. He didn’t call for that one, and Hall came close to tackling the left fielder. Hall dropped the ball for an error on the play.

Ellsbury wasn’t sure how long the injury would keep him out of the lineup. He expects to wake up sore today and said his next appearance depends on pain tolerance.

But as bad as the hit was, it wasn’t Ellsbury’s worst.

“I played football when I was younger,’’ Ellsbury said. “I guess you have pads and stuff, and you don’t take knees to the ribs. I don’t know how it looked, but for how hard we hit, I think I feel pretty good.

“I don’t mind taking hits. I’ll go across the middle, bounce back up.’’

Target grand opening
The Red Sox will open Minnesota’s new stadium, Target Field, today and it’s clear few of them will miss the Metrodome. Manager Terry Francona, for one, has expressed his hatred for the Twins’ former park many times.

He revealed yesterday his worst moment at the Metrodome. It happened in 2003, when he was on the A’s staff, and had just gone through a number of health issues. The problem had to do with the dozens of stairs necessary to get from the dugout to the clubhouse.

“It was the year I was with Oakland, when I was sick,’’ he said. “When the game was over, I had to wait, pick up my charts and everything and wait for the last person to leave, all the bullpen guys, because I couldn’t get up the steps. So I didn’t want anybody to see me. So I’d go three or four steps, then sit down. I’d go three or four steps. It took me 10 minutes. That’s probably part of the reason I hate that place. I hate it.’’

The Metrodome did provide the Twins with a huge home-field advantage. Asked if Target Field might eliminate some of that, Francona said, “Hopefully. I mean, they might be good at home because they’re good.’’

Pain in the neck
J.D. Drew sat for the start of yesterday’s game because of a stiff neck. Drew, who called it “stiff as a board,’’ first felt discomfort Friday, and played through it in the first two games of the series. “Hasn’t been so bad hitting,’’ he said. “It’s been running and throwing have been the tough thing. Hopefully kind of get it calmed down and get rid of it. It’ll be all right.’’ Drew did say that the neck wasn’t a factor on his misplay in Saturday night’s game, when a ball ticked off his glove. He said he lost that ball in the lights. “More than anything it’s been just the running, the jarring, and trying to throw the ball back in,’’ he said. Drew entered yesterday’s game after Ellsbury’s injury . . . Hall was the last member of the roster to get into a game, starting for the first time yesterday. He went 0 for 3 in place of Marco Scutaro. “I feel like I’ve got a little bit of pressure with the [bench] guys swinging the bats, guys hitting homers, driving in runs,’’ Hall said before the game. “Feel like a lot of pressure on me to do a little something, help the bench mob out.’’ Jeremy Hermida and Jason Varitek (two) homered Saturday night and Hermida added a two-run double yesterday . . . Six games into the season, Beltre has been as good as anyone on the Sox offensively, with a .400 average and six RBIs. “He’s using the whole field right now, which is great,’’ Francona said. “Took a chin-high fastball and drove it past first. He’s hitting the ball, using the whole field, so he’s got real good balance. That’s what I would I say has been very good right now.’’ . . . The Royals “Kiss Cam’’ got a shot of John Lackey and Mike Lowell. The third baseman reached over and patted Lackey’s head, as the crowded laughed and cheered.