Procedure called a success by team 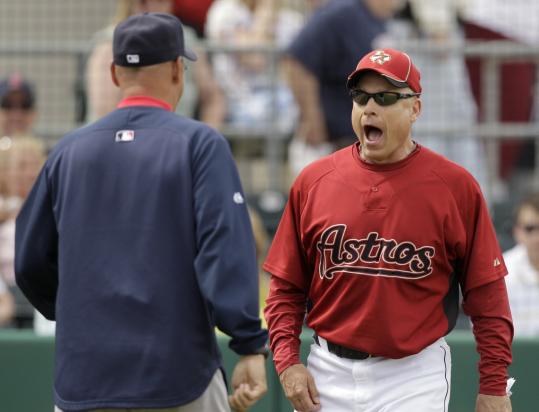 PORT CHARLOTTE, Fla. — Ryan Westmoreland, the Red Sox’ 19-year-old outfield prospect, underwent successful surgery yesterday in Phoenix to remove a cavernous malformation in his brain. According to a release by the team, Westmoreland remains in the intensive care unit after the five-hour procedure, but “has come through the surgery well.’’

“Due to the complexity of this surgery, Ryan will face a difficult period initially before beginning his recovery,’’ the release read.

Dr. Robert Spetzler of the Barrow Neurological Institute performed the surgery at St. Joseph’s Hospital and Medical Center in Phoenix.

Anthony Rizzo, a fellow Sox prospect and a cancer survivor, got the news in a text message from a good friend of Westmoreland’s while on the bus on the way to Port Charlotte for last night’s game against the Rays. According to Rizzo, the message said “the surgery couldn’t have gone better.’’

Rizzo, a first baseman, first heard about the diagnosis — as most did — when the Sox announced it Saturday night.

Westmoreland left camp March 4, was diagnosed March 5 at Massachusetts General Hospital, then got three more opinions from experts before deciding to undergo surgery.

“Red Sox, the last couple of years with [Jon] Lester and myself, they got us with the best doctors in the world, basically,’’ Rizzo said. “With Ryan, he’s a tough, strong kid. We’re all pulling for him.’’

“I can relate to what he’s going through, with his family,’’ Rizzo said. “But inside, before surgery, before my first chemotherapy I was more scared than I’ve ever been in my life. I was being strong for my family, but I couldn’t imagine what he’s going through with the surgery and all the things that could happen.’’

Lester looks strong
Thumbs up on Lester’s four-inning performance in a 3-0 loss to the Astros in Kissimmee yesterday, from both Francona and Lester himself. “I thought he executed more pitches than he had all spring,’’ said Francona. Lester allowed one run and three hits, the run scoring on a wild pitch. It was by far the best of Lester’s three outings this spring, extending to 60 pitches. “I was able to set some hitters up a little bit, so I was pretty happy with how I threw the ball,’’ said Lester. “Every year is different. As far as workload and strength-wise, I’ve had dead-arm periods at different times. You just have to get back used to being sore again every five days.’’ Lester didn’t say whether he’s gone through a dead-arm stage already. “I don’t know when and if it’s going to happen,’’ he said. “Sometimes it doesn’t and sometimes it lasts all spring. Right now, I feel good physically. ’’
Hot spot
The day after David Ortiz went deep to break out of a 1-for-19 slump, he had two more hits in last night’s 7-0 loss to the Rays. Ortiz had a single to left and a single to right, bringing his spring average to .217. “I saw a lot of baseball today, not a lot of runs,’’ said Francona, who witnessed the Sox get shut out twice. “But David swung the bat very well, so that was nice to see.’’ . . . Mike Lowell played first base last night, his second game at the position. He again declined to speak to the media. Asked if Lowell could play third base by the end of the week, Francona said, “Sure.’’ They are more concerned with getting Lowell at-bats . . . Felix Doubront continued to impress, throwing three scoreless innings against Tampa Bay, allowing one hit and one walk.
Old friends
Asked whether his former bench coach, Brad Mills, looked strange in that Astros uniform, Francona said, “He looks good. And he’s happy. This probably should have happened a long time ago. He’s a good baseball guy, he’s an even better person. There’s no reason he shouldn’t be enjoying what he’s doing.’’ It’s ironic that Francona was called this offseason by Astros GM Ed Wade, who had fired Francona as Phillies manager. “I would have fired me, too,’’ Francona said. Wade and Francona actually have become good friends, and Wade based a lot of his decision on Francona’s endorsement. Wade also had Mills as a coach in Philly . . . Francona was pleased with righthander Scott Atchison, who “continues to pound the strike zone with good pitches. We asked him to come in and compete, and he’s done a very good job of that.’’
Aiming for Friday
Josh Beckett, who missed his start Sunday because of flu-like symptoms, went through a short workout at City of Palms Park and is planning to start against the Pirates in Bradenton Friday. “I feel a lot better,’’ Beckett said. “The medication they gave me is starting to work. I’ll pitch Friday, no doubt.’’ . . . Jed Lowrie, who has missed four days recovering from an illness, was at City of Palms . . . Daisuke Matsuzaka played catch and remains on schedule to throw his first batting practice session of the spring this morning . . . The Dodgers have returned lefthander Armando Zerpa to the Red Sox. The 23-year-old reliever was taken by the Rays in the Rule 5 draft in December, then traded to the Dodgers.