Papelbon fine after being hit in wallet 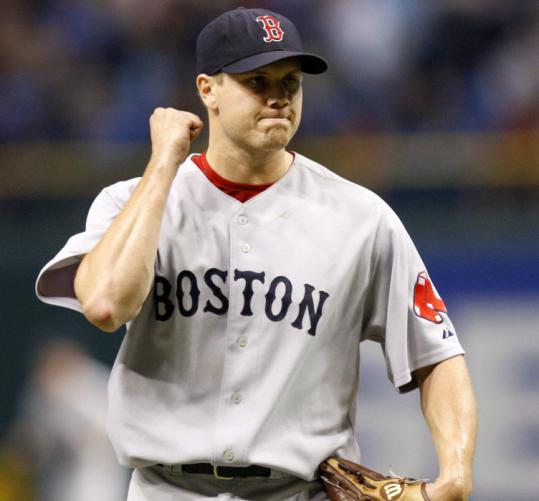 The league fined Papelbon $5,000 for a failure to comply with a new rule designed to increase the pace of games. Papelbon vowed he would finally adjust to the rules, while not allowing them to change his mound approach.

“What am I supposed to do about it, you know?’’ Papelbon said. “Ain’t nothing I can do about it. I’ll make an adjustment and move on. That’s it. It’s not going to affect my pitching. That’s for sure.’’

Papelbon has been fined for similar infractions this season. “I think it’s the fifth or seventh,’’ he said. “One of the two.’’

The league instituted two rules this season for pitchers, intended to speed play. They must throw the first pitch of a half-inning no more than 2 minutes 20 seconds following the final out of the previous half-inning. Pitchers are given 12 seconds to throw a pitch once a batter settles into the box.

Papelbon has been slow to adjust to both rules. His latest fine was for taking too long to enter the game Tuesday night. During his outing, the first six-out save of his career, umpires called a ball for Papelbon taking too long between pitches.

“It’s something I’ve got to get used to,’’ Papelbon said. “When I come in from the bullpen, I’ve got to speed it up.’’

The first pace-of-game violation cost Papelbon $1,000, and the fines escalated from there. He has since lost count of how much the league has fined him, but he knows the total has reached five figures.

Papelbon does not believe the Red Sox will help him pay the latest fine, “but then again, I don’t know,’’ he said. The club has discussed with Papelbon the need to comply with the rules.

“That’s ongoing conversations,’’ pitching coach John Farrell said. “You have to balance a pitcher’s prepitch routine and yet still be effective. A rule is a rule. You’ve got to abide and operate within those.’’

Farrell believes Papelbon will be able to warm up more quickly without sacrificing performance.

“Any time you have changes or adjustments, there’s a period in which you have to get comfortable with it,’’ Farrell said. “So, if it’s a quicker tempo, a little bit more of a quicker pace to his overall game, that’s going to take some harnessing. The one thing he has shown repeatedly is that any adjustments that have been presented to him, he’s adapted very quickly and continued to pitch well.’’

Last night, hours after he received a letter from the league detailing his fine, Papelbon proved he had put it out of his mind. He struck out two batters while throwing a perfect ninth inning in the Red Sox’ 6-3 victory over the Tampa Bay Rays. While Papelbon faced the leadoff batter, one fan hollered, “Throw the ball!’’

Over his eight appearances since Aug. 14, Papelbon has not allowed an earned run in nine innings, while striking out 14, walking four, and saving six games. Papelbon altered his mechanics to take strain off his arm at the outset of the season, which led to a lack of command. Papelbon has eliminated those issues while preserving his arm strength.

“He hasn’t lost any power or any command of the strike zone,’’ Farrell said. “His command has improved as the season has gone on. I think he’s maintaining maybe deeper into the season than last year.’’

“I felt pretty strong,’’ Papelbon said. “I’ve had a pretty heavy workload here lately, but I’ve been feeling good. Still strong. I think this is the time of the year where you know when to push the gas and let off.’’

Between his pitches, the league would like to see more of the former.