THIS STORY HAS BEEN FORMATTED FOR EASY PRINTING
Red Sox 7, Blue Jays 0 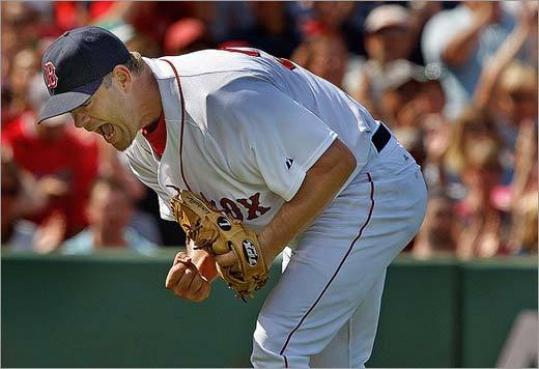 Paul Byrd shuffled a baseball through his fingers, a brief nervous tick, as he sat in front of the lights and cameras and questioners. Most pitchers come to the interview room ready (or not) to answer queries. Few come armed and ready to pitch again.

Byrd smiled when asked about the baseball, which was handed to him by reliever Takashi Saito at the end of yesterday’s 7-0 Red Sox win over the Blue Jays. As Byrd put it, “I got the game ball today. I’m like a little kid . . . It’s a real nice gesture. I just forgot to put it down and here it is.’’ Byrd, as if suddenly aware of the oddity of the ball’s presence, tucked his arms behind the podium. Then, he beamed.

No one could have expected what Byrd gave the Red Sox in his first major league start in 11 months. Not even Byrd, who said he came in anticipating nothing. The pitcher had been far enough away from the majors just a month ago that his preparation involved slowing his already slow fastball to the mid-70s, pitching to kids who topped out at 13 years old on his son’s team, the Georgia Roadrunners.

He was no longer a major leaguer, shunted off to an early retirement. And then he was back, making his way through the minors, pitching in Pawtucket, and yesterday in Fenway Park. Not just pitching, either. Byrd outdueled Roy Halladay, throwing six shutout innings and allowing three hits, getting the win as Boston finished off a sweep of Toronto that put it 3 1/2 games up on Texas in the wild-card race.

But Byrd had nearly given up hope. He had turned down offers in spring training after making a deal with his wife to take off the first half of the season. Speaking in the offseason, Byrd had said he likely would try to find a team to sign him after the June draft, when the team didn’t have to give up compensation to sign a Type B free agent. June came and went. The All-Star break came and went. He had gotten to the point where he felt like “maybe that part of my life was over, that chapter closed.’’

Clubs would call, would do their due diligence, and never follow through.

“I feel like I’ve had a great career in the big leagues,’’ Byrd said. “I’m super appreciative. My kids were just getting older, and it was just getting to the point where I needed to spend some time with my family. I really wanted to pick up around the break. I trained really hard, and tried to do that, and no one was really interested. I kind of learned I’m not Roger Clemens and I can’t just say no in the offseason, come back whenever I want. I thought it might be over.’’

It wasn’t. Byrd signed with the Sox at the beginning of August, and worked his way up. The start yesterday came partly out of necessity. With Tim Wakefield’s back continuing to ache, Byrd got his chance to pitch in the majors again. He was back in a postseason chase, back to where his fast-ish fastball, changeup, and slider worked with his old-fashioned double windup.

“Considering the circumstances, I mean a month ago he’s throwing BP to his kids and his team,’’ manager Terry Francona said. “He knows how to navigate his way through a lineup. He gives you a little bit of everything, a little bit of this and a little bit of that. He’s not scared. I think what made it easier for everybody is he’s been here. I know he was home and everything, it’s a little unique. But it wasn’t like he was coming to a place he doesn’t know . . . It was very welcome.’’

It worked well enough for the Blue Jays not to do a bit of damage against him. Though Byrd did load the bases in the fourth on two-out walks to Rod Barajas and Travis Snider, he got Jose Bautista to fly to right to end the inning. He ended the fifth by fanning Adam Lind swinging, which resulted in Byrd showing some emotion on the way to the dugout.

“I think the excitement is excitement about pitching, not pressure of having to do well,’’ Francona said. “I think he probably relished the fact that he was out there pitching in a game of that significance. I think he really enjoyed that.’’

He had, after all, just gotten his first strikeout in 11 months. He had completed five innings, which he had set out to do. He would go another, with one more hit. That would be it, as Byrd walked off to a handshake from his manager and a satisfied feeling.

Behind him, the Sox got four runs off Halladay, as they beat the ace for the second straight time. The Sox scored single runs in each of the first four innings, on an RBI double by Kevin Youkilis, a home run by Rocco Baldelli, a Youkilis sacrifice fly, and an RBI single by Alex Gonzalez. They added some insurance in the seventh, scoring three times off reliever Shawn Camp, who made a costly throwing error.

And that was it. The win went to Byrd, who will start against the White Sox in Chicago Friday or Saturday. At this point, Byrd is taking things a day at a time. He said his arm feels very strong, after all the time off. His ultimate goal is to help the Sox get a World Series ring.

He later added, “I love to compete. I love to get out. I’ve [dragged] my kids all over the country and they’ve never been able to play on a baseball team. Their school’s getting a little more serious, where I can’t always pull them out and get a tutor. My family had just reached that point. My wife looked at me. I just knew I needed to take some time off that first part of the year, and then I couldn’t get back in. That was tough because I felt like I could still bring something to the table.

That, as Byrd demonstrated yesterday, is no longer the case.