A heap of good news on the mound 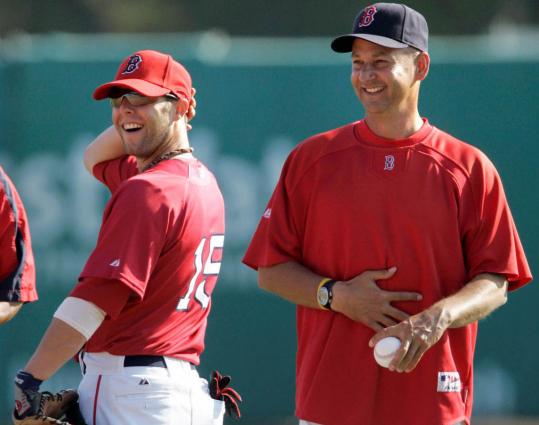 FORT MYERS, Fla. - The Red Sox received good news on the pitching front yesterday, with manager Terry Francona announcing that Josh Beckett will start a throwing program this morning at City of Palms Park after being out of action for about a week with a back injury.

Also, No. 2 starter Daisuke Matsuzaka is now free to join the Sox in Japan after his wife, Tomoyo, gave birth to a 6-pound-10-ounce boy at a Boston hospital at 7:30 yesterday morning.

Team doctors had predicted that Beckett would need about a week for his back to calm down. Beckett has been adding activities on a daily basis, including walking on a treadmill. He will throw off flat ground before working his way up to a mound, but he will do that in Fort Myers while the team flies to Japan after Matsuzaka pitches Wednesday against the Blue Jays at City of Palms Park.

Matsuzaka had been given the day off yesterday after pitching Friday, which aroused suspicions that he was returning to Boston for the birth of the child, although the team said nothing. Matsuzaka flew back to Boston Friday night.

The baby wasn't due until March 23, but Tomoyo Matsuzaka had said in her blog that she was going to have the child using "American methods"; in Japan, women have completely natural childbirth, with no medication.

Francona still did not reveal what his pitching rotation would be in Japan, but Matsuzaka and perhaps Jon Lester - yesterday's starter and winner in a 16-6 victory over visiting Cincinnati - appear to be the favorites. Tim Wakefield said he will pitch one of the exhibition games against the Hanshin Tigers.

Stirring dialogue?
Jonathan Papelbon was amused to hear that Yankees owner Hank Steinbrenner told the New York Post, "Being insulted by Papelbon is like being attacked by a mouse."

During the good-natured back-and-forth between Steinbrenner and Henry a few weeks back concerning which team's brand is more recognizable, Papelbon had told the Hartford Courant, "I don't know if he's trying to stir things up or not. I sure as hell don't care because he sure as hell hasn't stepped on a baseball field. He needs to just stick to pencil-pushing, I guess."

In response to the mouse quote, Papelbon said, "Whatever, dude. Obviously, by that comment, he's trying to start something. I'm not gonna get into it back and forth.

"I mean, I said that because I honestly believe it. People nowadays, whether it be reporters, ESPN analysts, guys that don't play the game, don't understand what it's about. What the grind is about, what the clubhouse is like."

When told that Steinbrenner said Papelbon made it personal, the closer said, "I don't know why he would take it that way. I'm saying guys that have never been on the field don't have the right to speak their mind about things that they don't know about. I'm not insulted by what he said."

Shock for Wakefield
Wakefield, who is scheduled to pitch five innings today in a camp game, addressed the departure of his friend, catcher Doug Mirabelli, with the media for the first time. He described his reaction as "shocked. Very shocked. I don't know what else to say about it. I was on the field and someone came and told me that Dougie has been released. I'm saddened by the whole situation, but it's a business decision on their part. I feel like [Kevin] Cash can do a good job, but I'm really going to miss Doug, especially with the way he's handled me and the comfort level. I'll miss his friendship. We've been together for eight years. We went through a lot of stuff together. It's unfortunate it happened that way, but we have to get past that and understand that I'm still an employee here." Asked whether this felt like it did in 2006 when Mirabelli was traded, Wakefield said, "I think it's worse now knowing he might not be back. More than likely he won't be back, which is pretty sad. Dougie was a great teammate. He was not only my personal catcher but a lot of guys in that clubhouse respected his opinion. He watched other hitters. He watched other pitchers. There were even times when David [Ortiz] would be hitting and he'd say, 'Hey, you're doing this wrong.' He cared about everybody on this team. Even though he was a backup catcher, his opinion was important to everybody."

Lester livens up
Lester said he felt much better yesterday (4 innings, 4 hits, 3 runs, 70 pitches) than he did against the Mets last weekend, when he said he was going through a "dead body" stage. Lester said he was achy all over after that start . . . Julio Lugo, out since March 2 with lower back tightness, went 2 for 3. The shortstop said he's ready for Japan . . . J.D. Drew and Joe Thurston smacked three hits each for the Sox. Jason Varitek, Brandon Moss, and Andrew Pinckney all homered. Moss, who played center field, is really opening eyes.