In ’02, Cameron wielded his clout 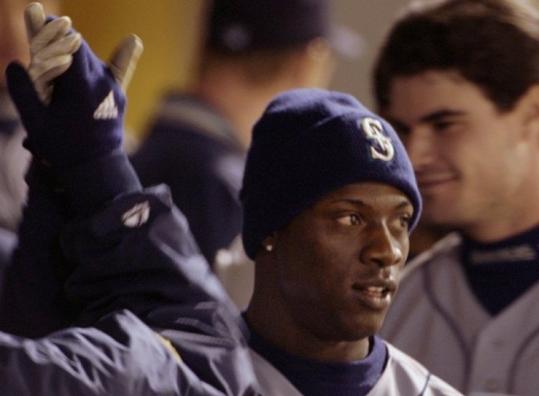 A fourth home run earned Mike Cameron a high-five from his Seattle teammates — and it was only the fifth inning. (2002 File/Stephen J. Carrera/Associated Press)
By Bob Ryan Globe Columnist / March 14, 2010

FORT MYERS, Fla. — The Seattle Mariners had lost the first two games of a three-game series against the White Sox in Chicago, so skipper Lou Piniella decided to fool around with the batting order.

Yes, on May 2, 2002, Mike Cameron became the 13th man in major league history to hit four home runs in a game (Shawn Green and Carlos Delgado have subsequently increased the list to 15). He is one of only six on the list to hit his four in consecutive at-bats, and he is the only one to have done his damage by the fifth inning.

“I was struggling a little bit,’’ recalled Cameron, the Red Sox new center fielder. “I didn’t even take batting practice. I just took a few ‘flips’ [i.e. hits off the batting tee] and went out there.’’

He and Boone were engaged in some friendly side-bet competition regarding hits, RBIs, etc., so Cameron was pretty jacked up when Boone followed an Ichiro hit-by-pitch with a homer off Chicago rookie starter Jon Rauch.

Cameron had spent his first seven years in baseball with the White Sox organization and had never really gotten over being traded for Paul Konerko.

“I always wanted to show them something,’’ he said.

The count was 1-and-2 when he knocked one out to dead center.

The Mariners continued to pound Rauch, who had to be relieved by southpaw Jim Parque. Boone came up for the second time in the first with the score 7-0 and he made it 9-0 with a two-run homer.

“I was really concerned about keeping up with Boonie, and here he’s already hit two home runs,’’ Cameron said.

He ran the count to 3-and-2 off Parque and then hit another one out, again to dead center. Boone and Cameron had just become the first (and, as yet, only) duo to hit back-to-back homers twice in the same inning.

“We were feeling pretty good about ourselves,’’ Cameron said.

Move to the third. Parque is still pitching.

“Boonie comes up and strikes out,’’ continued Cameron. “I come up and I hit one good but foul. The count goes to 3-and-2 and he throws me a slider. I just demolished it. It was another home run, this time to left.

“People are starting to look at me funny. I don’t know what’s going on. I’m just playing the game. I just don’t want to lose this feeling. It’s amazing how I’m seeing the ball. I’m feeling unbelievable. I’m feeling like Barry Bonds in his whole career.’’

Three homers is nice, but lots of guys have hit three in a game, including a pitcher (Jim Tobin) and a quasi-midget (Freddy Patek) and a guy who didn’t start the game (Art Shamsky). Four is a more exclusive fraternity.

“He throws a changeup,’’ Cameron says. “I see the ball come out of his hand. By this time for me, it’s like SuperBalls jumping off a lead bat or something. After he releases it, he sees me getting ready to swing and he drops his head.’’

The official record has the ball carrying 412 feet, the third time in this game Cameron has hit the ball over the dead-center-field fence.

And it was only the fifth inning.

By the time he came up again in the seventh, a young lefty named Mike Porzio had replaced Parque, and he must have been a bit nervous, because what he did was hit Mr. Four Homer with a pitch.

But there would be one more chance for the fifth homer in the ninth.

Cameron came up again to face Porzio with two on.

“I just wanted a hit, because I wanted those ribbies,’’ he said.

The count went to 3-and-0 when Porzio threw a meatball.

Oh, how Cameron wanted to swing at that pitch. But it was a 15-4 game in the ninth, and to swing at a 3-and-0 pitch when a game is out of hand is a serious violation of baseball etiquette.

“There is no way I could take that swing,’’ said Cameron. “You can’t do that. I could put my team in a situation you don’t want to be facing.’’

So the count went to 3-and-2 and Cameron put yet another good swing on the ball, sending one to right-center.

“I thought it was going out,’’ he said. “I really did. But Jeff Liefer robbed me of a home run right up against the wall. But I was more [upset] I didn’t get the ribbies than I was over not getting the home run.’’

What got into Mike Cameron that day? He’s a guy who, though no legendary slugger, has always been able to hit home runs (265 lifetime). But that day was almost an out-of-body experience.

“I was in total synch,’’ he said. “The ball had slowed down. I was able to let my natural ability take over.’’

As Dave Cowens might say, it was a singular day for his portfolio of baseball experiences.

Now, he says, he’d like to expand that résumé.

“I’ve been known for two things,’’ he said. “One, I hit four home runs in a game. Two, I was traded for Ken Griffey Jr. Hopefully, the third will be that I helped bring another world’s championship to Boston.’’