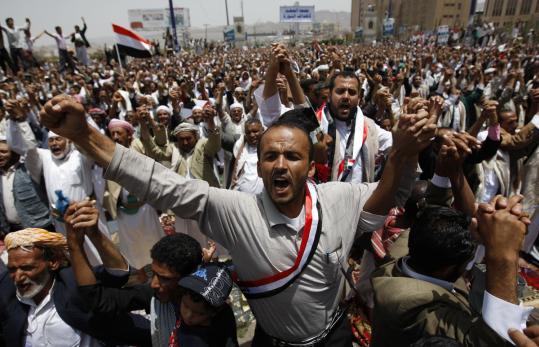 Yesterday, protesters called on the vice president — who is Yemen’s acting leader — to allow the creation of a new government. (AFP/Getty Images)
By Ahmed Al-Haj Associated Press / June 11, 2011

SANA, Yemen — Nearly 100,000 Yemenis protested yesterday in a main square of the capital, demanding the president’s ouster in the biggest rally since Ali Abdullah Saleh left for Saudi Arabia after he was wounded in an attack on his palace.

Saleh’s evacuation for medical treatment has thrown Yemen into a dangerous political standoff, with opponents insisting he now be pushed completely out of power and his allies seeking to preserve his rule. Saleh was wounded in a blast that hit a mosque where he was praying in his presidential palace on June 3. Badly burned, Saleh was rushed to Saudi Arabia for treatment along with a number of top officials from his regime who also were wounded in the blast.

But the president’s allies say he could return within days and have been resisting US and Saudi pressure to start now on a handover of power. Saleh, who has ruled for nearly 33 years, has held out against a wave of daily protests since late January demanding his removal, throwing the country into turmoil. Before he was wounded, opposition tribesmen rose up and battled for two weeks with government forces in fighting that shook the capital.

The United States fears that the impoverished country’s power vacuum will give even freer rein to Al Qaeda’s branch in Yemen, which Washington believes is the terror network’s most active franchise. Already, Islamic militants — some suspected of ties to Al Qaeda — have taken control of at least two areas in the restive south, a provincial capital, Zinjibar, and the nearby town Jaar.

Yesterday morning, warplanes hit militant positions north of Jaar, witnesses and security officials said. They said there were casualties but the number was not known. The night before, troops used artillery to attack other militant positions near the town, killing at least six militants, according to medical officials. The medical and security officials spoke on condition of anonymity because they were not authorized to talk to the press.

In Sana’s Taghyeer (Change) Square yesterday, the crowds of protesters demanded that the vice president — who is acting leader in Saleh’s absence — allow the creation of a new government. “The people want a transitional government,’’ they chanted.

The opposition tribesmen marched through the square with the bodies of 41 of their fighters they say were killed a week ago when troops bombarded the Sana home of one of their leaders. The tribe’s chief, Sheik Sadeq al-Ahmar, led the march of around 10,000 people from the square to a cemetery in the capital, as protesters chanted, “The people want the butcher put on trial,’’ referring to Saleh.

In another part of the city, about 3 miles away, several thousand Saleh supporters held a rally outside his presidential palace. No friction between the two sides was reported.

Similar anti-Saleh protests were held in cities around the country, including in Taiz, Yemen’s second-largest city, where tribesmen have moved in to protect protesters who came under attack last week in a fierce crackdown by government troops. In recent days, government forces and tribesmen have been fighting in the city, trading gunfire and shelling.

Since Saleh’s evacuation, Sana has been under a fragile cease-fire, with government troops still deployed in the streets where they once battled Ahmar’s tribal fighters. The situation has raised fears of a new explosion of violence if a political solution is not found soon — or if the president does indeed return.

The United States and Saudi Arabia are pressing Saleh’s ruling party to move ahead with a Gulf Arab-mediated agreement under which he would formally leave power in exchange for immunity; a new unity government would be formed between the ruling party and opposition parties; and new elections would be held within two months.

But youth activists leading the street protests reject the deal, saying it would allow elements of Saleh’s regime to remain in power. They demand the creation of a transitional government made up of technocrats.

In Abu Dhabi on Thursday, Secretary of State Hillary Rodham Clinton called on all sides to honor a cease-fire.

The upheaval of the past months has left Saleh too preoccupied to focus on the fight against Al Qaeda, and the United States has stepped up its covert operations in Yemen.