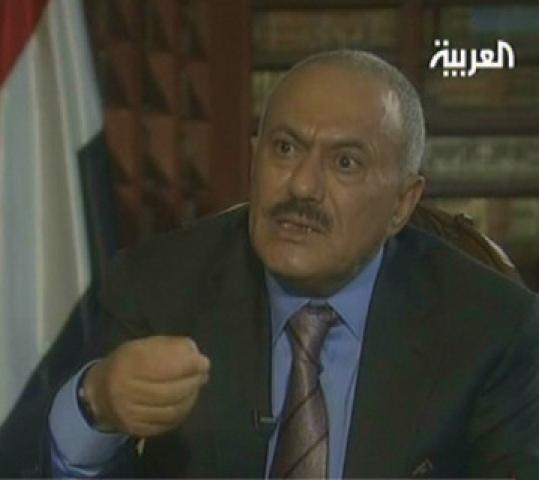 President Ali Abdullah Saleh, who has ruled Yemen for 32 years, had said he would step down at the end of this year. (AFP/ Getty Images/ Al-Arabiya)
By Ahmed Al-Haj Associated Press / March 28, 2011

SANA, Yemen — Yemen’s president, clinging to power yesterday despite weeks of protests, scrapped an offer to step down by year’s end, and Islamic militants took advantage of the deteriorating security to seize of another southern town.

President Ali Abdullah Saleh’s opponents — a group that started with university students and has expanded to include defecting military commanders, politicians, diplomats, and even Saleh’s own tribe — had immediately rejected his offer a week ago to leave by the end of this year.

The offer’s formal withdrawal indicates that an attempt by both sides to negotiate a transfer of power to end the crisis has failed.

In a sign of what is at stake in Yemen if security further unwinds, Islamic militants seized control of a small weapons factory, a strategic mountain, and a nearby town in the southern province of Abyan, said a witness and security officials.

A day earlier, militants believed to belong to Yemen’s active Al Qaeda offshoot swept into another small town in the area called Jaar. In both cases, the militants moved in with no resistance because police had withdrawn weeks earlier in the face of challenges by antigovernment protesters.

Saleh, who has ruled for 32 years, is a key ally of the United States in battling Al Qaeda in the Arabian Peninsula, which the Obama administration considers the top terrorist threat to the United States.

The Obama administration is concerned that the cooperation could be imperiled if Saleh departs. “If that government collapses or is replaced by one that is dramatically more weak, then I think we’ll face some additional challenges out of Yemen,’’ Defense Secretary Robert Gates said on ABC TV’s “This Week.’’

Saleh himself warned that “Yemen is a ticking bomb’’ and said that without him in power, the country would descend into civil war.

Saleh convened a meeting yesterday of hundreds of members of his Congress Party’s leadership committee. A party statement released afterward said the meeting affirmed that Saleh should remain in his position until his term ends in 2013.

Jordan
Jordanians yesterday mourned a 55-year-old man who died in a violent antigovernment protest two days earlier. Khairi Saad was the first person to die in nearly three months of unrest in Jordan.

The government insisted he was one of its supporters and that he died of a heart attack. But Saad’s brother said Saturday that he was among the protesters, and an Islamic opposition group said he was a follower of the Muslim Brotherhood and was beaten to death by police.

Thousands of supporters of Jordan’s King Abdullah II took to the streets of Amman, the capital, on Saturday to express their loyalty.

The 7,000 people sought to put on a display that would counterbalance scenes a day earlier when security forces and government supporters clashed with protesters seeking political reforms and new elections.

The Jordanian activists have not sought the ouster of Abdullah, but they are demanding the removal of the prime minister, creation of a more reformist government, the dissolving of what is seen as a docile Parliament, and the dismantling of the intelligence department.