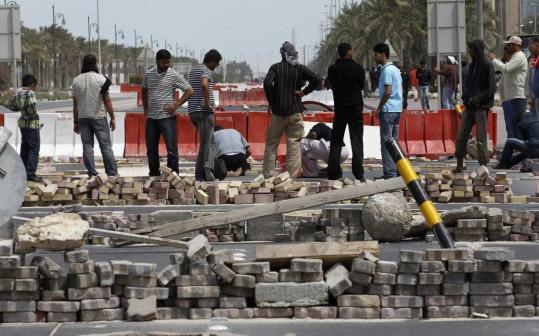 Antigovernment protesters blocked roads against riot police at an intersection in the capital yesterday. Protesters calling for democratic reforms have shut down large swaths of the capital. (Hamad I Mohammed/ Reuters)
By Michael Birnbaum Washington Post / March 15, 2011

The Bahrain Defense Force confirmed the arrival of military units from a special Gulf Cooperation Council security force. The council is a regional economic and military alliance that comprises Saudi Arabia, Bahrain, Kuwait, the United Arab Emirates, Qatar, and Oman.

A United Arab Emirates official said that both his country and Saudi Arabia sent forces to Bahrain at that government’s request.

“The Bahrain government asked us yesterday to look at ways to help them to defuse the tension in Bahrain,’’ bin Zayed said. He said the move was intended to “get calm and order in Bahrain and to help both the Bahraini government and the people to reach a solution.’’

A spokeswoman for the Bahraini government, Rebecca Guthrie, declined to say that Bahrain had asked for the military presence. “I couldn’t say whether it was requested or not,’’ she said, “but the decision came out after a GCC foreign ministers’ meeting’’ on Sunday.

Bahrain’s main opposition groups denounced the outside intervention and said it would push the kingdom closer to war.

“It’s like a declaration of war on the people who are engaged in a peaceful protest demanding basic rights,’’ said Jassim Hussain, a spokesman for Al-Wefaq, the main political opposition party. “They are viewed as occupation forces.’’

He said that the presence of “foreign troops’’ made it more difficult for opposition groups to engage in negotiations with the government.

Clinton, who is making a 24-hour stop in Paris while on her way to the Middle East, did not comment on the Bahrain unrest. Asked about the possibility of a no-fly zone in Libya, she said only that she looked forward to a “comprehensive discussion’’ with world leaders over the coming days.

The US Embassy in Bahrain advised American citizens to stay in their residences.

An official statement by the GCC said the forces were sent “to help protect the safety of citizens, residents, and critical infrastructure.’’

Protesters who have been calling for democratic reforms have successfully shut down large swaths of Manama, the capital city, and Bahraini security forces have been fighting back with tear gas and rubber bullets. Progovernment civilians have in some cases attacked protesters with sticks, knives, and swords; the protesters have responded with rocks and other objects, witnesses have said.

Witnesses in Manama said that most downtown businesses were closed yesterday.

The Obama administration repeated its call for restraint in Bahrain.

“The United States is deeply concerned about yesterday’s violence in Manama and particularly troubled by reports that some demonstrators instigated violence, causing serious injuries. We are also aware of reports that Saudi Arabia has sent security forces support to Bahrain and that other GCC countries are considering doing so as well,’’ said Tommy Vietor, a National Security Council spokesman.

“We urge our GCC partners to show restraint and respect the rights of the people of Bahrain, and to act in a way that supports dialogue instead of undermining it,’’ Vietor said.

Frederick Martin, a spokesman for the US Navy’s Fifth Fleet, which is stationed in Manama, said in an e-mail, “We have a longstanding relationship with the Government of Bahrain, and they are a valued member of the Combined Maritime Forces. We continue to monitor the situation.’’

Authorities in Saudi Arabia, which is connected to Bahrain by a causeway, have looked at its smaller neighbor with growing anxiety, fearful that a victorious Shi’ite majority in Bahrain could embolden Saudi Arabia’s own Shi’ite minority in its nearby oil-rich Eastern Province.

They are also worried about Iran exploiting the situation off the Saudi coast, although American officials have said that they do not believe Iran has been involved in the Bahrain protests.

On Sunday, a progovernment political society in Bahrain called for martial law to be imposed, the state news agency reported, while the White House issued a statement condemning the use of force.

Protesters, who are largely from the country’s Shi’ite majority, have occupied central Pearl Square in Manama since mid-February.

They have been calling for democratic reforms and an end to what they say is discrimination against Shi’ites by the Sunni monarchy.