Worst fire in Israeli history continues to burn out of control

Lack of equipment, funding hampers efforts to fight it 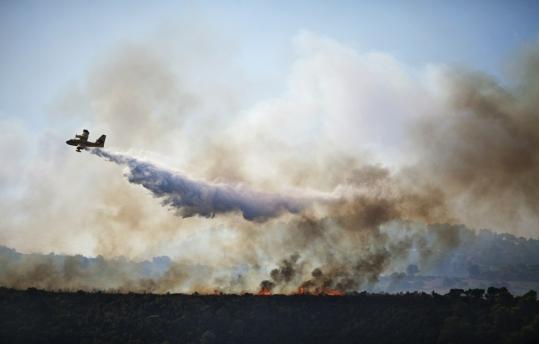 A Canadair firefighter plane sprayed water over flames in Carmel Forest on the outskirts of Haifa yesterday as thousands of Israeli firefighters and rescuers fought to control the blaze. (Marco Longari/AFP/Getty Images)
By Janine Zacharia Washington Post / December 4, 2010

JERUSALEM — The worst fire in Israel’s history showed little sign of abating yesterday after two days of the unchecked blaze had killed 42 people, consumed more than 7,000 acres, and nipped at neighborhoods in Israel’s third-largest city, Haifa.

The fire also destroyed a large chunk of Carmel Forest, one of Israel’s natural treasures and a popular tourist and vacation destination. It is known as Little Switzerland because of its beauty.

By yesterday, the flames had engulfed several kibbutzim and was racing down hills toward Israel’s heavily traveled coastal highway. At least 15,000 residents were evacuated.

In a country as small as Israel, where territory is at the heart of political conflict, every inch of land is precious. Nevertheless, Israel has neglected to invest in the equipment and personnel needed to effectively combat the wildfires that have become pervasive in recent years amid unseasonably high temperatures and periods of drought. In a country of 7 million, there are only 1,500 firefighters.

This winter has been one of the hottest and driest on record. Jerusalem rabbis this week held a special prayer for rain at Judaism’s holiest site, the Western Wall.

Fires this year ravaged parts of the disputed Golan Heights and charred nature preserves on Jerusalem’s outskirts. Israel used its entire 200-ton stock of fire-retarding chemicals battling those outbreaks, so it had none on hand when the latest fire erupted.

The country boasts the region’s most powerful military and is often among the first to send rescue teams to disasters abroad, but it could not handle this fire alone.

“Our firefighting measures cannot provide an answer to forest fires of this magnitude, especially in the face of such winds. We do not have such equipment,’’ Prime Minister Benjamin Netanyahu said yesterday.

The fire has brought international support at a time when Israel has felt isolated diplomatically. Turkey, which has had a strained relationship with Israel since Israeli troops seized a Gaza-bound Turkish aid ship in May, sent two planes.

Britain, Greece, Bulgaria, Cyprus, Russia, and Jordan also sent help. Turkey and Greece set aside their political differences and flew sorties together to douse the flames.

After the 2006 war with the Lebanese militant group Hezbollah, a national inquiry found that Israel’s fire services were underfunded and unprepared and recommended an investment in firefighting aircraft. But even as Israel prepares to acquire hundreds of millions of dollars worth of advanced fighter jets, no budget has been allocated for the much cheaper aerial firefighters.

The Carmel fire will be painful for many Jews abroad; raising money to plant a tree in Israel has been a mission of the Jewish diaspora for decades.

Experts said it would take at least 50 years to restore the forest.