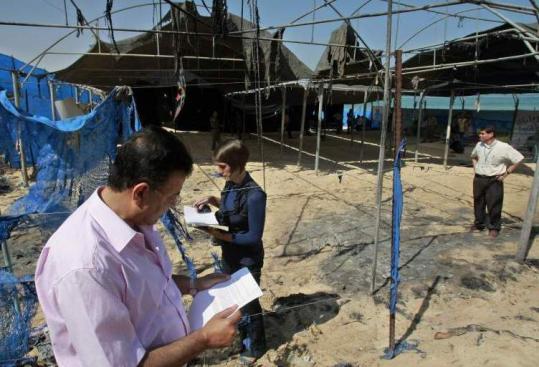 Palestinian employees of the UN relief agency inspected the damage at the camp, which serves about 2,000 children. (Adel Hana/Associated Press)
By ASSOCIATED PRESS June 29, 2010

GAZA CITY, Gaza Strip — Two dozen masked men vandalized a UN summer camp for children in Gaza early yesterday, burning and slashing tents, toys, and a plastic swimming pool. It was the second such attack in just over a month.

There was no immediate claim of responsibility for the attack, which took place before dawn when no children were present.

In a statement about the attack, the United Nations said that about two dozen armed and masked men targeted a seaside day camp in central Gaza, one of dozens of UN sites across the Palestinian territory.

Hamas condemned the attack in a statement by the Gaza police and said it would be investigated.