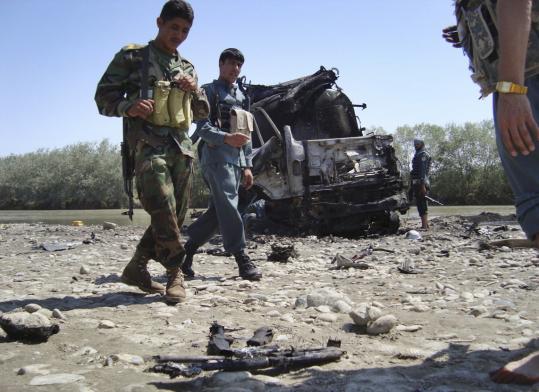 Afghan police investigated the wreckage of the hijacked fuel tankers targeted in the airstrike yesterday. The strike killed more than 70 people, most of them civilians, according to police. (Associated Press)
By M. Karim Faiez and Laura King Los Angeles Times / September 5, 2009

KABUL, Afghanistan - In an incident that could seriously undermine the central aim set forth by the new US commander in Afghanistan, dozens of Afghan civilians were killed and injured yesterday in an airstrike by NATO-led forces on two hijacked fuel tankers, according to Afghan authorities.

The predawn strike in a remote part of northern Kunduz Province, near the border with Tajikistan, killed more than 70 people, most of them civilians, according to Afghan police, provincial officials, and doctors. Dozens of villagers suffered serious burns in the fireball ignited when the tankers were hit, they said.

NATO is investigating the strike, which comes at a time of deepening political turmoil in Afghanistan.

Tensions have been running high as votes are being tallied in the country’s disputed presidential election.

Upon assuming command of American and Western forces in Afghanistan in mid-June, US General Stanley A. McChrystal had declared the safeguarding of civilian lives his top priority, because such casualties erode support among Afghans for the presence of foreign forces.

In the initial hours after yesterday’s strike, Western military officials expressed confidence that nearly all those killed had been insurgents. But reports trickling in from the scene painted a grim picture of impoverished villagers engulfed by the explosion as they swarmed the stranded tankers, trying to siphon fuel.

The strike was called in by German troops, who make up the bulk of Western forces deployed in Kunduz, and involvement in such an act could depress already flagging domestic support in Germany for the Afghan mission.

The hijack drama began Thursday night when militants suspected of belonging to the Taliban commandeered two tanker trucks as they traveled along a main road. In recent months, NATO has been sending supplies into Afghanistan via Tajikistan, to the north, after Taliban militants in Pakistan’s tribal areas repeatedly attacked what had been the most widely used supply route, running through the Khyber Pass.

After the hijacking, the trucks were tracked via aerial surveillance to a spot near the village of Omar Khel, where they became stuck when the hijackers tried to drive them across a riverbed. Western military officials said they believed there were no civilians in the area, a crucial precondition for airstrikes under a tactical directive issued by McChrystal soon after he took command.

But there was a time lag of more than a half-hour between when the decision to call in a strike was made and it was carried out, according to military officials.

Some Afghan officials said the Taliban encouraged local people to take advantage of the bonanza on their doorstep, alerting villagers in the middle of the night to the stranded trucks’ presence.

The initial casualty tally was provided by local officials, including pro-Western provincial Governor Mohammed Omar, who said many of the 70-plus dead were civilians. That number, which has fluctuated, could change again as the investigation continues.

The handling of the aftermath will be a test for McChrystal and his inner circle. In the past, denials and a slow pace of investigation by US and Western forces in the face of large-scale civilian casualties have further inflamed sentiment against the coalition.

It is not uncommon for such incidents to end with disagreement between Afghan and Western officials about the scope and nature of civilian casualties.