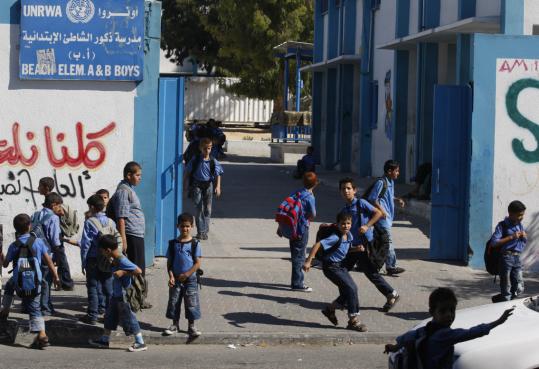 GAZA CITY, Gaza Strip - A Hamas spiritual leader yesterday called teaching Palestinian children about the Nazi murder of 6 million Jews a “war crime,’’ rejecting a suggestion that the UN might include the Holocaust in Gaza’s school curriculum.

A senior Israeli official called the Hamas statements “obscene’’ and said such statements should make the West think twice about ending its boycott of Hamas, in place since the group seized Gaza by force in 2007. Israeli officials said the statements place Hamas in a pariah club of Holocaust deniers that includes Iranian President Mahmoud Ahmadinejad.

Hamas spiritual leader Younis al-Astal lashed out after hearing that the UN Relief and Works Agency, the main UN body aiding Palestinian refugees, planned to introduce lessons about the Holocaust to Gaza students.

Adding the Holocaust to the curriculum would amount to “marketing a lie and spreading it,’’ al-Astal wrote in a statement.

“I do not exaggerate when I say this issue is a war crime, because of how it serves the Zionist colonizers and deals with their hypocrisy and lies,’’ he wrote.

Many Palestinians are reluctant to acknowledge Jewish suffering, fearing it might diminish their own. Attitudes toward the Holocaust range from outright denial to challenging its scope.

Hamas has been making overtures to the West, hoping to end a stifling blockade of Gaza. And the statements about the Holocaust by senior Hamas officials could undermine the group’s attempt to present itself as pragmatic. The United States and Europe list Hamas as a terrorist group, but there have been growing calls, particularly in Europe, to talk to the militants. Hamas control of Gaza is seen as a key obstacle to any Mideast peace deal.

Three teachers at UN schools said that according to the new program, basic information about the Holocaust was expected to be taught to eighth-grade students as part of human rights classes.

Two of the teachers said they were told about the lesson plan by colleagues involved in the new syllabus. Another teacher said he attended a recent meeting with education officials where he was told to try to teach the new syllabus without offending parents

All three said they had not received the syllabus for the human rights classes yet, even though the school year began in late August. They requested anonymity because they are not allowed to speak to reporters.

UNRWA provides education, health care, and welfare services to more than half of Gaza’s 1.4 million people. Spokesman Chris Gunness said a final decision has not been made about the Holocaust course for Gaza schools.

“While the Holocaust is currently not included on the basis of age appropriateness, all elements [of the curriculum] remain under review and under evolution,’’ he said.

Hamas spokesman Sami Abu Zuhri also objected to including what he referred to as the “so-called Holocaust’’ in the lesson plan. “We think it’s more important to teach Palestinians the crimes of the Israeli occupation,’’ he said.

Israeli government spokesman Mark Regev said countries contemplating ending their boycott of Hamas must “seriously reconsider’’ after the Hamas statements, which he described as “obscene.’’

The Holocaust is not taught in West Bank schools, said an education ministry official in Western-backed President Mahmoud Abbas’s government.

Israelis have long complained that Palestinian textbooks present Israel only as an enemy, despite a series of interim peace deals. Also, they charge that maps in the books do not show Israel at all.

Palestinians make similar charges about Israeli education. Recently Israel’s education minister ordered a halt to using the accepted Arabic term “nakba,’’ or catastrophe, to describe the results of the two-year war that followed Israel’s creation, when about 700,000 Palestinians fled or were forced from their homes.