US and Israel differ on strategy if Iran talks fail 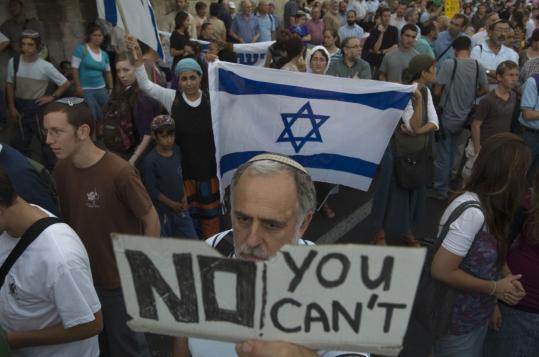 JERUSALEM - Defense Secretary Robert Gates and his Israeli counterpart both stressed yesterday that they support engagement and economic sanctions to prevent Tehran from acquiring a nuclear weapon. The two leaders, however, appeared to differ markedly on the prospects for the talks’ success and what steps to take if diplomacy failed.

Israeli Defense Minister Ehud Barak twice in a short news conference raised the possibility that military action might be needed at some point to stop Iran’s nuclear program. “We clearly believe that no options should be removed from the table,’’ Barak said. “This is our policy. We mean it. We recommend others to take the same position, but we do not dictate to anyone.’’

Gates steered clear of any talk of military options. Although the Obama administration hasn’t ruled out using military force in Iran, it has focused most of its attention on drawing the Iranians into talks over their nuclear program and convincing Iran that developing a nuclear bomb is not in its best interest. Gates said the administration hopes to have an initial response from Iran regarding its entreaties by the fall.

If the talks fail, he said, stiff international economic sanctions on Tehran were in order.

“I think we’re in full agreement [with Israel] on the negative consequences of Iran obtaining this kind of capability,’’ Gates said. “I think we are also agreed that it is important to take every opportunity to try and persuade the Iranians to reconsider what is actually in their own security interest. We are in the process of doing that.’’

The Israelis haven’t outwardly, or in private, opposed talks between the United States and Iran, US defense officials said. “I certainly had the sense from my meetings with the prime minister and the defense minister today that they are perfectly willing to allow this process of attempted engagement to go forward,’’ Gates said.

Barak’s remarks, however, made it clear that the Israelis remain deeply skeptical that any sort of engagement will dissuade Iran from developing a nuclear weapon.

Despite the outward differences in tone, the Israelis described Gates’s talks with Prime Minister Benjamin Netanyahu and Barak as taking place “in a highly positive atmosphere.’’

Both Gates and Barak stressed that the opening for engagement with Iran was a limited one. “If there is an engagement, we believe it should be short in time, well defined in objectives followed by sanctions,’’ Barak said. He noted that it wouldn’t take “too much time to clarify’’ whether talks can produce results.

Gates also warned that the Iranians would not be allowed to use the cover of engagement to “run out the clock’’ while they continued to make progress in the nuclear program. “The timetable the president laid out still seems to be viable and does not significantly raise the risks to anybody,’’ he said.

The half-day trip to Israel marked Gates’s first visit to the Jewish state as defense secretary. From the outset of his tenure as Pentagon chief, Gates has stressed that any strike by the United States or Israel on Iran would have a profoundly destabilizing effect on the Middle East. He has also said repeatedly that an Iranian nuclear weapon would provoke an arms race in the region that would be very damaging.

Destroying an Iranian nuclear weapon program would be a tough mission. It could take hundreds, if not thousands, of air sorties to penetrate Iran’s air defenses and strike its known nuclear facilities. Even if such strikes were successful, they wouldn’t necessarily destroy Iran’s program, although they would probably set it back several years.

US military bases in Iraq would also be extremely vulnerable to Iranian missile strikes after a US or Israeli attack.