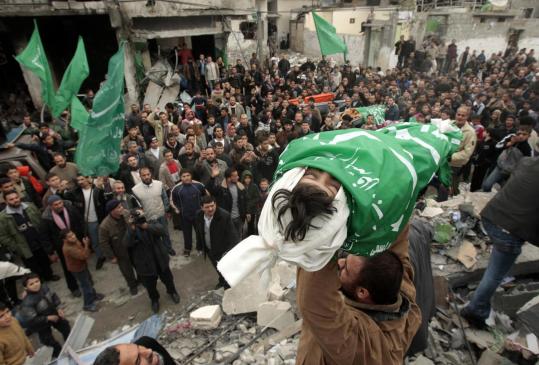 The Palestinian death toll rose to 364, according to Palestinian medical officials. The Israeli death toll stood at four, including three people killed in rocket fire yesterday. One of the rockets hit a bus stop in Ashdod, a coastal community 23 miles north of Gaza, another sign that Hamas is launching longer-range rockets than it did before a six-month truce expired Dec. 19.

Israel sealed off an area around Gaza yesterday, declaring it a "closed military zone," amid indications that the army may be preparing for a ground offensive. Meanwhile, Israeli jets continued to strike targets across the narrow coastal strip, including a security compound and the homes of suspected Hamas operatives.

While previous Israeli assaults on Gaza have pinpointed crews of Hamas rocket launchers and stores of weapons, the attacks that began Saturday have had broader aims than any before. Israeli military officials said yesterday that their target lists have expanded to include the vast support network the Islamist movement relies on to stay in power in the strip. The choice of targets suggests that Israel intends to weaken all the various facets of Hamas, rather than just its armed wing.

"There are many aspects of Hamas, and we are trying to hit the whole spectrum, because everything is connected and everything supports terrorism against Israel," said a senior Israeli military official who spoke on condition of anonymity.

"Hamas's civilian infrastructure is a very, very sensitive target. If you want to put pressure on them, this is how," said Matti Steinberg, a former top adviser to Israel's domestic security service and a specialist on Islamist organizations.

Israel has said its goal in attacking Hamas is to make life secure for the hundreds of thousands of Israelis who live within range of rockets fired from Gaza. But officials have said they do not want to reoccupy the strip just three years after they withdrew troops and settlements from it.

Hamas fired dozens of rockets into southern Israel yesterday. The three Israelis killed included one person in the Negev community of Nahal Oz, a woman at the bus stop in Ashdod, and a construction worker in Ashkelon. Nineteen people have been killed in attacks from Gaza so far this year.

Israelis living in the coastal cities of Ashdod and Ashkelon, once believed to be out of range of Gazan rocket fire, spent large parts of yesterday in bomb shelters and sent their children to stay with relatives in other parts of the country.

"Today was an awful day," said Sigal Arieli, a mother of three living in Ashkelon. "One rocket landed near our neighborhood pizza restaurant, and another one landed near a children's playground."

Israel has not allowed foreign reporters into Gaza since the operation began Saturday.

In the Israeli offensive, one of the first targets was a police academy, where scores of recruits were preparing to join a security service that Hamas uses to enforce its writ within Gaza. Other targets included government ministries, a Hamas television station, smugglers' tunnels, a seaport, and a university building.

In addition to carrying out attacks against Israel, the Islamist movement serves as the de facto government in Gaza, operates an extensive social services network, and exercises considerable control over what is left of Gaza's ramshackle economy.

Major Avital Leibovitch, an Israeli defense spokeswoman, confirmed that the military has widened its target list from previous operations, saying Hamas has used ostensibly civilian operations as a cover for military activities. "Anything affiliated with Hamas is a legitimate target," she said.

The Israeli attacks have struck at some of the most prominent symbols of Hamas power in Gaza. The territory's uniformed police have taken major hits, with several police compounds destroyed. The police force is tasked with enforcing order internally, not attacking Israel. But the Israeli military has said police are fair game because they are armed members of Hamas's security structure and some moonlight as rocket launchers.

Another prominent target was the Islamic University of Gaza. Early yesterday, warplanes flattened the school's five-story science building. The university was once known as a bastion of support for the mainstream Palestinian Fatah movement, but it gradually fell under Hamas's sway, and many of the movement's top leaders are alumni. Hamas heavily influences the curriculum and uses the campus as a prime recruiting ground.

Leibovitch said the building destroyed by Israeli fire was being used to develop enhanced weaponry for Hamas fighters.

Kamalin Sha'ath, head of the university's trustees council, denied that assertion and accused Israel of trying to ruin Palestinian culture, not just Hamas infrastructure. "This attack shows the real face of Israel, which doesn't want anything for this community," he said.

The smugglers' tunnels, which run beneath the Egyptian border, were another key instrument of Hamas power. On Sunday, Israeli missiles demolished 40 of them, though more are believed to remain.

Hamas has used the tunnels to smuggle in weapons from Iran. But it also allowed and profited from an elaborate black market of commercial goods that kept Gaza's economy going despite an Israeli economic blockade.

Amr Hamad, the Gaza-based assistant secretary general of the Palestinian Federation of Industries, said even that flow of supplies may now disappear. "The most basic goods are not available in the shops," he said.

Hamad said he fears that with the economy worsening, people will become even more dependent on Hamas for jobs and handouts. "Most people are just trying to earn their daily bread," he said. "The normal people are suffering, not the Hamas leaders."

Ali Jarbawi, a political scientist at the West Bank's Bir Zeit University, said that may be the point.

"What they are doing now is like a punishment for [Gazans] accepting Hamas control," said Jarbawi.